Jamie Drummond co-founded the advocacy organization DATA (Debt, AIDS, Trade, Africa) with Bono, Bobby Shriver, and others in 2002 and ONE in 2004. The two entities merged in 2008 under the name ONE. DATA, ONE, and its partners have helped persuade the Bush Administration and bipartisan leadership in the US Congress to launch a series of initiatives for Africa including the Millennium Challenge Account, the President’s Emergency AIDS initiative, the Malaria Initiative, Multilateral Debt Relief, and the African Growth and Opportunity Act. Through the G8, DATA, with partners, helped negotiate and advocate for a new high-water mark of promises at the 2005 Summit, involving a doubling of aid promised for Africa by 2010, including improvements in aid quality. Jamie was formerly global strategist for Jubilee 2000 “drop the debt” and, prior to that, worked at Christian Aid. He has traveled widely in Africa and Asia and has a Masters in Development from the London School of Oriental and African Studies. In 2007, Jamie was elected a Young Global Leader by the World Economic Forum. 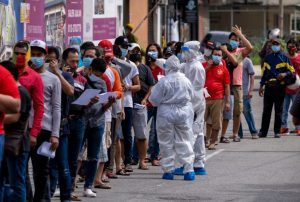 There’s a damaging rumor doing the rounds in Kibera, Nairobi’s massive informal settlement: that COVID-19 is a fabrication invented by the country’s elite to raise money from the World Bank and the World Health Organization (WHO) to pay off the elite’s debts.