Citizens’ trust in their governments has much to do with whether the government creates the conditions of fundamental fairness and delivers for all of its constituents. Global inequality has reached staggering proportions, with the wealthiest one percent owning half of the world’s assets, while the bottom half of the global population owns less than one percent. Some political leaders are pitting the biggest losers of globalization – the middle class in developed countries and the poorest in developing countries– against one another. Aid budgets are under attack at a time when global humanitarian needs have never been greater. The media is under pressure all over the world. The political will needed to tackle these challenges appears to be dwindling. For those of us committed to the fight against poverty, as I am, we are in for the fight of our lives.

As the tectonic plates of geopolitics shift and some Northern leaders retreat from international cooperation, I believe we have an emerging source of hope: the young people of Africa. The wave of democratization that spread across Africa in the 1990s gave birth to a new optimism as ordinary Africans gained increasing control of their own destinies. While uneven, economic growth has contributed in some countries to the expansion of an African middle class. Several countries have gained both economic and political prominence on the international stage. The African Union has emerged as a powerful platform for tackling both crises and development opportunities, and for strengthening a united African voice. And a belated but growing recognition has emerged that this dynamic, yet oftignored, continent is poised to play a major role in shaping the future of global economics and politics.

This optimism, while still warranted, is tempered by some unpleasant realities. Africa’s democratic wave has stalled; at least 10 countries have reversed constitutional term limits on the head-of-state. Plummeting commodity prices and the challenges of unbalanced globalization have hindered some African economies in the transition from being producers of primary products to industrial powerhouses. Some 45 percent of Africans report that they or someone in their family has faced a food shortage in the previous year.

And in South Sudan, so-called leaders have turned their backs on millions of citizens gripped in the jaws of famine.

The scale of the challenge and the expectation of citizens that governments should have the answers are tempered by the limits of state effectiveness and legitimacy, in some cases due to capacity constraints and, in others, a deficit in political will. In the most recent Afrobarometer survey, sizable percentages of respondents report having little or no trust in legislative bodies (47.8 percent), courts (42.3 percent), police (47.9 percent), national electoral commissions (44.2 percent), and opposition parties (58.5 percent). Roughly two-thirds believe their government is doing a poor job of improving the living standards of the poor and in fighting corruption. Nearly a third of those surveyed believe people fail to report corruption because they are afraid of the consequences.

Reversing the trend is no easy task, but the solution is no mystery – we need to combine equal parts development, global norms, and transparency. We can take steps to ensure that the 130 million women and girls currently out of school around the world have access to an education. There are proven methods of incentivizing the private sector and African governments to invest in Africa’s demographic dividend, in which 22.5 million new jobs will be needed each year to absorb the continent’s youth boom.

Enlightened leaders can engage youth in political and civic spheres and harness open data to transform the ways in which African countries are governed.

The trust of citizens must also be nurtured by the credible belief that the global system works in the interests of everyone. African governments must take the necessary steps to police and prosecute corruption – but policymakers in Asia, Europe, and North America must close loopholes that facilitate money laundering and tax evasion, including from cash-strapped developing countries.

Finally, nothing builds confidence like transparency and open government. Citizens cannot trust what they cannot see. When citizens are kept at arm’s length by opacity and secrecy, participation is off the table and they have no choice but to serve as active opponents. Transparency enables citizens to hold their governments accountable yet also fosters the civic engagement that can lead to the outcomes that both citizens and reasonable governments seek.

Achieving any of these aims will require political will, capacity building, and an empowered citizenry – ingredients that can also fuel the trust needed to take success to scale. But it will also take individual action. We must stand up for what we believe, and bend the arc of history toward fairness, justice, and equality. And we must remember that the most important work seldom is easy, nor is it done alone. To build trust in our institutions, we must put trust in each other and shape institutions that serve the greater good. 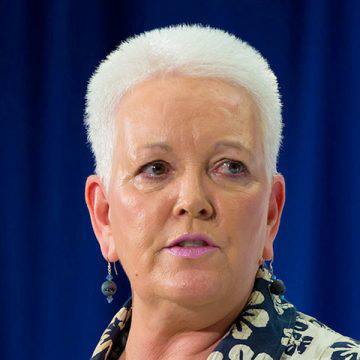 Citizens Can’t Trust What they Can’t See – essay by @GayleSmith on how development plus #opengov can #RenewTrust http://bit.ly/2wa40He

.@GayleSmith discusses how we can #RenewTrust in institutions by advocating greater fairness, justice, and equality http://bit.ly/2wa40He