Getting things done for the People, with the People

With the OGP, we declared a new phase of governance where co-creation is a rule, not an exception.

The three Open Government National Action Plans that the Government of Georgia has developed since joining the Open Government Partnership (OGP) in 2011 are reflections of practising progressive values while building better governance. This form of governance effectively serves its citizens. I have seen many strategies and action plans during my tenure, but the spirit embodied by the OGP Action Plans is rather unique: these documents are exceptional because of the range of themes they cover and the direct links to citizens’ everyday lives.

The way we chose to do OGP at the national level is a story of trust-building between the government and the public. It is fair to admit that we all need to make more ambitious commitments, and government officials understand this the most. However, the journey our government, civil society and wider public took together in the pursuit of openness lies at the core of these commitments.

Our OGP story starts with the Open Government Georgia’s Forum (Forum) – a permanent dialogue mechanism that we established to co-create open government reforms. The Forum is comprised of public agencies, local non-governmental and international organizations, as well as business sector representatives sitting at one table, planning the open government reforms of the country. The government is committed to listening to the voice of civil society.  With OGP, we declared a new phase of governance where co-creation is a rule, not an exception. The Forum, as a multi-stakeholder body, shares responsibilities in elaborating, implementing, monitoring and evaluating OGP reforms. It is the place to channel civil society energy and knowledge in the best possible direction, and it is where that energy can translate their recommendations into solid government commitments. We are proud that the Parliament of Georgia and the City Hall of Tbilisi later used our co-creation model as they joined OGP programs.

As part of the Forum, public servants and representatives of civil society jointly conduct public consultations on open government commitments. Undoubtedly, this sounds simple, but in reality it becomes a turning point for our citizens to trust our work. It leads to citizen-catered governance as a result. I have heard stories from colleagues — both from government and civil society organizations — on how surprising it was for the wider public to enter the open discussion, and for them to lead side-by-side with the government and civil society. It was surprising how honest the conversations would become after a few minutes.

Engaging directly with our citizens has given us a better understanding of the shortcomings we need to overcome. Last year we introduced our Four Point Reform Agenda to further modernize our country in a way that benefits all Georgians. One of our major reform areas seeks to foster open and accountable governance.

One of the examples I am always honored to share refers to the success we achieved in taking public service delivery to a new level.

When consulting with our citizens, we once again realized that it is essential that services are tailored to citizens’ needs. Therefore, the feedback of citizens should be used as the basis for their development. In the same line of thought, in the framework of the 2nd OGP National Action Plan of Georgia, the Public Service Hall (PSH) – the main hub of delivering public services across the country –launched an innovative feedback system. This system, called the “Voice of the Consumer”, allows citizens to directly participate in improving PSH service quality through a special system and imposes an obligation on the PSH to close the feedback loop and respond to each and every comment/recommendation received from a citizen. This mechanism has allowed a citizen with disabilities to directly suggest adapting facilities for people with disabilities at the PSH. Based on this feedback, the citizen, competent organizations in this field and the government developed a new project on adapting the PSH to the needs of the people with disabilities. That very project became a commitment in Georgia’s 3rd OGP Action Plan. This is a shining example of building bridges between the government and the public.

Georgia is a small country with a not-so-long history of independence. But it has a solid record of accomplishment with reforms that have changed the way citizens interact with government. OGP success stories have unlocked new opportunities, not only at the national but also international levels.

We hope to share many more success stories of getting things done for the people, with the people. 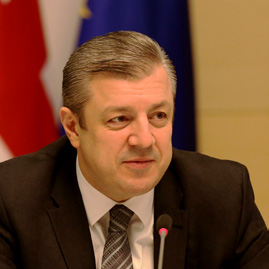 New #OGP government co-chair @KvirikashviliGi of Georgia shares his thoughts on how #opengov can #RenewTrust http://bit.ly/2wXIKDZ