I believe there is a close connection between this decline in public trust in government, the dismal condition of public debate and consultation, and the rise of “post-fact” populism

A disturbing brand of populism has been sweeping through Europe and North America. It plays to feelings of powerlessness and distrust. Populists like Donald Trump or Marine Le Pen claim that globalization benefits the rich. They say immigration undermines Western values and exposes these countries to terrorists. They claim our governments have been taken over by “elites,” who they blame for the crisis they say is blazing all around.

Our governments must share the blame for the rise of this brand of populism. In a democracy, public debate and consultation are supposed to inform citizens and give them a meaningful voice on issues they care about. However, today debate is often highly scripted, fiercely partisan, and largely unproductive. As for consultation, while good processes exist, far too often things go wrong: the process gets hijacked by interest groups, “managed” by government officials, or arrives at conclusions that baffle the public.

People are left feeling disconnected from their governments and powerless to do anything about it. There is a sense that governments can no longer be trusted to do what is right. The following slide from Ekos Research in Ottawa provides a snapshot of this trend in Canada and the US: 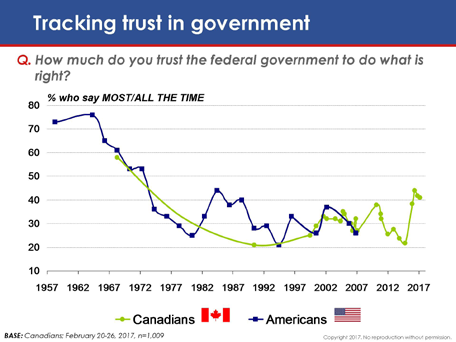 I believe there is a close connection between this decline in public trust in government, the dismal condition of public debate, and the rise of “post-fact” populism. If so, giving people a meaningful say on issues they care about should be a critical part of any plan to rebuild trust.

So, what is wrong with consultation and can we fix it?*

Traditional consultation works like this: First, government listens to the public’s views. Then it goes behind closed doors to discuss what was heard. Finally, it arrives at conclusions it believes are in the best interests of the community. Sometimes this works well. For example, asking people for their views on how to improve a government training program can be very helpful. Once the closed-door discussions are done, however, participants will expect a report on how their input was used.

This means officials must provide the reasoning behind their decisions. And that will show how seriously they considered what people had to say in the consultation. This is the real test of a successful process. Treating people’s views with respect is what makes participation meaningful.

In fact, many consultation processes will never pass this test – no matter how smart or well-intentioned the officials. An example from local government shows why. A major hospital in Ottawa, Canada, is planning to build a new campus on land transferred from the Experimental Farm, a national historic site. A key issue is whether the hospital should sharply limit parking spaces to protect the natural beauty of the Farm.

This disagreement is about more than traffic flows and trees; it is about values. Some people believe the Farm’s value as a scenic historic site far exceeds the value of any parking spots it might be used to create. Others disagree. These differences can’t be reasoned through the same way, say, technical issues or financial matters can. Trade-offs and compromises over values like these are much more subjective.

Asking officials to make them behind closed doors is a formula for division. It creates winners and losers among the stakeholders and citizens in the process. People with a big stake in such issues are far more likely to accept a compromise if they’ve had a role in making it.

Open Dialogue is a technique designed to resolve these value conflicts more fairly by giving the community a meaningful role in making the trade-offs. This is NOT a talk-fest. Open Dialogue requires serious commitment, hard work, and follows strict rules of engagement. Participants must listen to one another and treat each other’s views with respect. Open Dialogue challenges them to view debate less as a winnertake- all contest and more as a shared effort to find a win/ win scenario. It teaches people that complex issues rarely have simple solutions and that, when debate is cast this way, usually no one wins.

Let’s be clear, however, that not every issue can be a win/win. Many really do create winners and losers and Open Dialogue won’t change this. It is NOT a silver bullet for all our problems. I want to conclude by returning to the question of trust. Open Dialogue may build trust, but it also requires trust: Participants must trust one another to be open and fair in their exchanges. They must trust the government to respect the choices they make together. And government must trust the process and participants to deliver recommendations it can work with.

Open Dialogue is not the answer to all the issues raised by globalization or democracy, but it is a very good place to start rebuilding trust in government and refuting the populists’ charge that our governments have been taken over by elites. 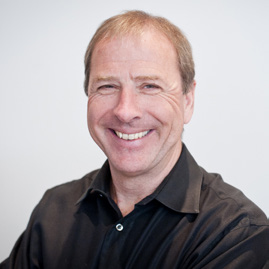 * The ideas in this article are explored in greater detail in What is “Open Dialogue?” and is it the Answer to “Post-Fact” Populism?, which can be downloaded free of charge at: http://www.Canada2020.ca

Treating people’s views with respect is what makes participation meaningful. – @DonLenihan on how to #RenewTrust http://bit.ly/2y01GyN

Ppl w/ a big stake in issues are more likely to accept compromises if they’ve had a role in making it. http://bit.ly/2y01GyN #RenewTrust