I firmly believe that government can earn trust only when change is visible and reform seems like a wave – fast but ready to dissolve should it face an obstacle.

Trust is a scarce jewel in the modern world. It is even more so, when we consider trust of citizens in their government, often perceived as bureaucratic and taking decisions in the name of many but in favor of few. And yet the issue is even more complicated in countries like Ukraine that lack centurieslong history of building national institutions, and where ever-changing foreign rulers traditionally alienated people with sudden and often extremely cruel decisions.

After 10 years in investment banking, I volunteered to the position of Deputy Minister of Economy to help reform, among other things, Ukraine’s public procurement system after the Revolution of Dignity in 2014. I faced the deepest mistrust between government, business and citizens, in a country still scarred by its Soviet past and facing new challenges from Russian military and trade aggression. There was wide consensus that everything done by the government was suspicious, inefficient and driven by vested interests. And of course, very often that was indeed the case.

Our team took trust-building very seriously as we vitally needed business to believe change was under way and to participate in tenders. Thus our reform was based on several principles:

Ukraine’s participation in the Open Government Partnership and Open Contracting Partnership was instrumental to all of this. The country’s action plan has a focus on e-governance and public participation as a method to break rigid governmental decision-making processes and combat corruption. E-petitions and open data laws, e-declarations for public servants and open registers for VAT reimbursement are powerful tools to bring light to shady corners of the state. Another example, ProZorro.Sale, is used to sell assets of more than 80 bankrupt banks owned by Ukraine’s Deposit Guarantee Fund. To avoid suspicions that best assets may be hidden from the public or misused, we are launching an online assets catalog where potential buyers can actually select which assets are put on sale in the nearest auction.

In this manner data transparency combined with public involvement in decision making improves policy efficiency. But, even more importantly, this enables elements of direct democracy – where every citizen does not delegate its decision-making power to a distanced government, Hobbes’s Leviathan, but is a part of one! 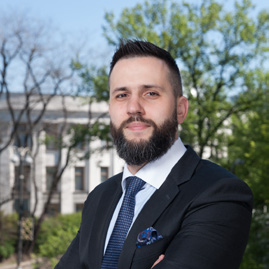 What has Ukraine done to #RenewTrust? @nefyodov highlights #opengov principles & #OGP in the trust-building journey http://bit.ly/2x2xWUF

Turning to the #opengov successes in Ukraine for lessons on how to #RenewTrust http://bit.ly/2x2xWUF @nefyodov

If you don’t want to share your data – sorry you can’t bid for public funds! – @nefyodov http://bit.ly/2x2xWUF #RenewTrust