Trust in Times of Intense Scrutiny

Modern politics is not dictated by a 4- or 5-year election cycle any more, but by a 24- hour news and social media cycle. So how do we earn the trust of our citizens in a time of such intense scrutiny?

I am more optimistic about the future of Europe than I was this time last year, but we still face many challenges which we must tackle head-on; stubborn pockets of unemployment, inequalities within and between countries, keeping control of migration, tackling climate change, and of course fighting back against terrorists and their poisonous ideologies. To win all these battles we must stand united. And to stand united as a European Union we must earn the trust and confidence of those that we serve. Modern politics is not dictated by a four- or fiveyear election cycle any more, but by a 24-hour news and social media cycle. So how do we earn the trust of our citizens in a time of such intense scrutiny?

We live in an open world. Open minds, open societies, and increasingly open systems of government and governance. On the latter, the European Commission aims to lead the way. Trust is an increasingly valuable commodity, which can only be earned by public institutions if they commit to transparency. In a post-paternalistic world, we can’t just say ‘trust us’ when people are crying out ‘show us’. This is why the European Commission has made important steps forward in its work on transparency and openness. We aspire to be among the world leaders in modern global governance. This is in the interests of all our citizens and of the businesses that operate in Europe. One of the first things this Commission did, in our first month in office, was to adopt new rules on transparency, opening up about which stakeholders meet our decision-makers and top officials to discuss policy with us. This rule covers our President and the full College of Commissioners, it covers each of our Cabinets (our key advisers) and it covers the Commission’s Director-Generals – the top officials in each of our policy departments or services. The Commissioners take political responsibility for our work, so they must be accountable to the public.

This transparency on our side about who we meet is coupled with a pledge to only meet representatives who have signed up to the Joint Transparency Register, which we run together with the European Parliament. This public Register obliges organizations to list the policies they follow, tell the public who represents them in Brussels, and give an indication of how much money they spend trying to influence policy. By refusing to meet people who are not on this register, the Commission makes registration a de facto obligation for any serious and respectable organization. The number of organizations in our Register has grown by around 50 percent since we adopted this approach. To make the Transparency Register system even more credible, the Commission has invited the Parliament and Council to adopt the same rules as we do on only meeting registered organizations. We want all the Institutions to have the same commitment to transparency. As yet we don’t have their commitment, but we hope it will be forthcoming as we pursue our negotiations with them.

Transparency also means opening up the process of policy formulation and law making, and ensuring that it is evidence-based. As part of our Better Regulation Agenda, the European Commission now actively consults the public every step of the way, from before we pick up the pen and start drafting until after we send our proposals to the European Parliament and Member States for their deliberations and adoption. In this way, we can be sure that we collect all the relevant input, and balance all the different political, economic, social and environmental considerations before we take our decisions. Everybody has the right to be heard.

Everybody also has the right to propose ideas for new EU policies. We have a tool in place called the European Citizens’ Initiative, which allows citizens to come together and submit a legislative proposal to the Commission. Each one that collects a million signatures of support is guaranteed to be put on the Commission’s agenda at one of our weekly meetings, and the Commission will adopt a Communication setting out if and how we intend to follow up. In this year’s annual Commission Work Program we have concrete actions from one of the first Initiatives we registered.

The Citizens’ Initiative is now five years old, and this year we are taking steps to update the relevant Regulation and, for example, take advantage of new identification and collection technology to make it easier to organize and support an Initiative. Delivering on this reform will be an important priority for me before the end of this Commission’s term in office.

The Commission has thrown open the windows, and is ready to earn people’s trust by doing things differently, and transparently. We will be judged by what we deliver of course, but we will also be judged on how transparently we do it. This is the key to good governance.

We live in an age where people want to throw mud at ‘the establishment’, whether that means governments and public authorities, or the media and big business. Obscurity is the best friend of conspiracy. It is easier to make people fear and distrust what lies behind a closed door than what they can see through an open window. It is time that more governments showed they have nothing to hide. 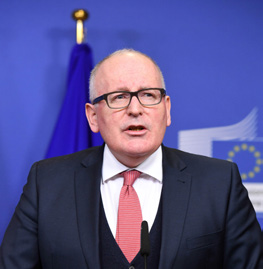 Fighting to #RenewTrust, @TimmermansEU says “We can’t just say ‘trust us’ when people are crying out to ‘show us’” http://bit.ly/2f5TWrA