Defining youth as age cohort is particularly problematic here as it hinders their political participation and deliberately excludes them. It asserts that the youth are of tomorrow rather than of today denying them participation in governance

7,000 young Tunisians have joined Daesh1 in Syria, constituting the largest foreign fighters’ group to date (The Soufan Group, 2015). My 22-year-old cousin could have been among them. He explained that while others have taken advantage of the political vacuum of the revolution, “I felt more marginalised”. Since 2012, Tunisia has projected into the public imagination a rhetoric of fear and surveillance to justify the treatment of youth as potential terror suspects. This perception of fear is gradually translating into policies that have further radicalised disaffected youth. An accurate understanding of the factors leading to radicalisation is essential in developing an effective policy response. We need to prevent radicalisation in the first place and address the need for youth to find nonviolent social and political identities. This can be achieved if governments focus on rebuilding trust with youth through their equal participation in shaping public policy and the future of their country.

Although young people played a leading role in toppling Ben Ali ‘s regime, the post-revolution climate did not allow them to be part of the decision-making process. Young Tunisians were not only excluded from senior positions within state institutions, but also from political parties, where their involvement did not exceed 2.7 percent (TNYO, 2013). While the political scene had become open to everyone, the second republic failed to engage the youth and listen to their grievances (World Bank, 2007). Defining youth as age cohort is particularly problematic here as it deliberately excludes them. It asserts that the youth are of tomorrow rather than of today, denying them participation in governance.

The notion of Hogra (the perception of injustice), expressed by the state towards the population2 can help us better explain youth marginalization. In the popular culture of Maghreb3 countries, Hagar is the one who abuses his power to crush others. Hogra is social injustice and unfairness from the perception of the Mahgour [the victim of Hogra]. In the social imagination, all those who have power or money have acquired these positions by crushing the most vulnerable. Hence, Tunisian youth have internalised the idea that they are Mahgours. Therefore, when injustice is perceived, young people look upon violent groups as legitimate fighters against the Hagar (the state) rather than perpetrators of violence. This can explain why the youth are perceived to be heroic when they join violent groups. Seeking martyrdom through individual violent activities might not be a manifestation of religion as much as of a reaction to Hogra.

Moreover, if individuals are deprived of their political rights, they are more likely to feel rewarded when they join violent groups (Gaxie, 1977). The ambition of Tunisian youth to change the status quo, and what it perceived as a corrupt and unjust political system shows that Daesh stands as policy preference for the youth where “religious fundamentalists are ideologues and political activists are primarily concerned with political power” (Tibi, 2002: 20). Youth experiences explain a “crisis of legitimacy and trust” in government. “Big man” illegitimacy, therefore, may legitimise violent extremism.

The shift in Tunisia’s politics from a narrative of reform to a narrative of counterterrorism is counterproductive, especially because it targets young people. It contributes to the perceived “collective punishment” and deepens the feeling of Mahgour at the hands of state institutions. In addition, the state frames marginalization as a form of victimization, which overlooks youth agency. Ironically, the same victimhood narrative is used by violent groups to recruit youth and sustain support.

We need to address the political demands of the youth to address the crisis of legitimacy and trust. The “big man” has to give space to the younger generation to occupy leading positions and take part in the decision-making process. Therefore, a narrative of empowerment as well as national and social belonging should be promoted in the face of victimhood narratives.The government needs to develop a holistic socio-economic response where youth are at the heart of policymaking and reform, taking decisions that affect their lives.

In 2013, my cousin was de-radicalised not only by receiving the attention of our family and community, but also by the local government engaging him in municipal cultural centres and local council. The youth are calling attention to their being and becoming. To build their trust in institutions, we need to reframe the radicalisation debate so they can be perceived as part of the solution, not the problem. 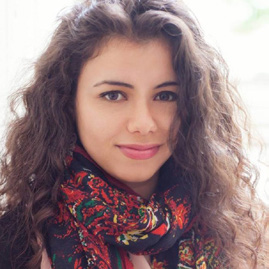 Aya Chebbi
Founder and Chair of Afrika Youth Movement, and co-founder of the Voice of Women Initiative (Feminist Collective)
@aya_chebbi

1. Daesh is the Arabic acronym for Islamic State in Iraq and Syria (ISIS); the name emerged as a mockery of the self-proclaimed Caliphate
2. The concept is of an Algerian origin, but very well rooted in the Maghreb in general. The “Hogra” was one of the main causes of the 1988 revolt in Algeria. As a concept, Hogra is absent in literature, but it is worth investigation as a theoretical framework, particularly to explain different fields of study of youth and the state in Africa.
3. What I refer to as the Maghreb here is Tunisia, Algeria and Morocco

Radicalized youth have lost trust in government. @aya_chebb says we must engage more youth in govt to #RenewTrust http://bit.ly/2eVoxE8

Putting youth at the heart of the policymaking & reform is essential to #RenewTrust in government says @aya_chebb http://bit.ly/2eVoxE8