Paul Maassen started working with the Open Government Partnership in June 2012. He is currently the Chief, Country Support (CCS). The CCS leads on the implementation of the strategy for OGPs engagement with and strategic support of all OGP stakeholders at the national and local level. His team with staff in over 10 locations supports global efforts of open government champions, primarily of government and civil society, in using Open Government Partnership to further their objectives on transparency, accountability and participation. Before assuming this role Paul was responsible for overseeing the OGP support to civil society across the globe. Paul has a long track record in the role technology and media can play in changing people’s lives and the societies they live in.

Prior to joining OGP Paul worked as Head of Finance and Partnerships for WWF International’ Global Climate & Energy Initiative, working primarily with WWF offices in emerging economies to strengthen the design and sustainability of their programs. Before joining WWF Paul worked for 7 years with Dutch development organisation Hivos, as program manager for the global ICT & Media program. This is where he learned the ropes of being a funder and got a deep understanding of the complexities of realizing change in developing and repressive countries. Paul strongly believes in the potential of individuals to make a difference if they set their mind to it and get the tools – including technology – to realize their potential. He was also involved in the establishment of the East African citizen agency initiative Twaweza. Paul attained private sector experience with Dutch telecom company KPN. He holds an MSC in industrial engineering and management. Paul is based in Brussels.

Paul can be reached at Paul.Maassen@opengovpartnership.org 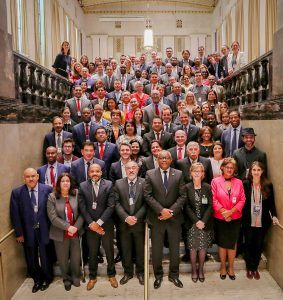 The European election of 2019 is said to be a watershed moment that will ask voters to choose between more or less Europe, between inclusion and diversity or exclusion and nationalism, and between societies that are more open or more…

Roughly a quarter of the Netherlands – what’s in a name? - lies below sea level. In the 13th century, as the population grew and land was increasingly drained for agriculture, managing water levels became a priority. At first, people…