Stephanie is the Chief of Communications and Campaigns. In this role, she leads global advocacy initiatives. Stephanie created and led the organization’s first integrated campaign, Break the Roles, launched its CitizenEngage storytelling project, and developed the Open Response + Open Recovery platform.

Before joining OGP, Stephanie served as a Presidential Appointee at the United States Agency for International Development (USAID), the lead U.S. government organization for global development and humanitarian assistance. At USAID, she was the Deputy Assistant Administrator for Public Affairs and led the divisions of strategic communications, media, public engagement, content creation, and branding. She created numerous creative campaigns for USAID including Let Girls Learn, Mom and Baby, and Extreme Possibilities. She also oversaw more than 150 communications and outreach specialists working overseas, including developing a global training program.

Prior to joining USAID, Stephanie spent more than a decade at public relations agency Weber Shandwick as Senior Vice President, Management Supervisor, and Creative Director for the Washington, D.C. office. She was also a leader of the firm’s Social Impact team where she developed communications and campaign strategies for a wide range of clients, including the Bill & Melinda Gates Foundation, the W.K. Kellogg Foundation, the United Nations Foundation, the National Women’s Law Center, the Paul G. Allen Family Foundation, TEDxWomen, the MAC AIDS Fund, the Ad Council and on philanthropic and policy issues for private sector companies including Cisco and Microsoft.

Everyone Has A Story. Together We Have A Mission.

We all have a story about how democracy has affected our lives, our families and friends, our communities, our countries, and the world at large. 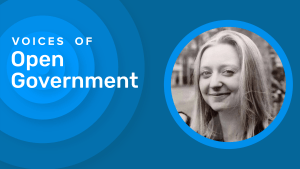 To Build Transparent Algorithms, Focus on the Why

In this episode of the Voices of Open Government podcast, learn what France has done to increase algorithmic transparency using citizen input while raising awareness about the use of algorithms. 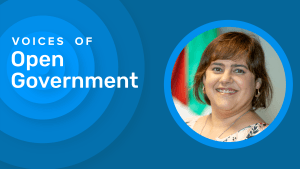 When the Whole Neighborhood Pitches In, Results Are Better

In this episode, Miren Martiarena Barkaiztegi shares how the Basque Country in Spain has worked to involve all local institutions and citizens in the policy-making process.