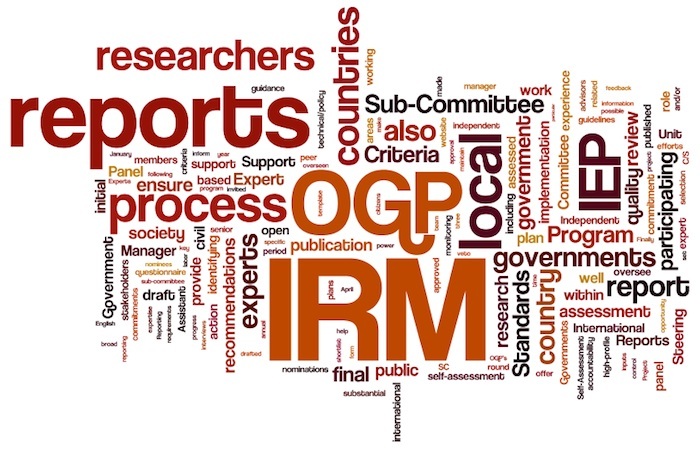 The IRM is in its first year, still under development at this time. The members of the Criteria and Standards Subcommittee of the OGP Steering Committee (governments of Brazil, South Africa, Tanzania, and the United States and civil society members Revenue Watch Institute, Instituto Mexicano para Competitividad, and the Transparency and Accountability Initiative) have been hard at work setting up the necessary structures and guidance for the IRM at this critical time, including the formation of the IRM’s guiding body, the International Experts Panel (IEP). At its December meeting, the full OGP Steering Committee will be taking a number of critical decisions to guide the shape of the IRM, which will in turn help protect the credibility of OGP itself. This post attempts to explain, in plain English, three major decisions the Steering Committee will take in its December meeting.

IRM Guiding principles The Criteria and Standards Subcommittee has been working hard to finalize a set of guiding principles for the IRM. The “IRM Guiding Principles” document will serve as the principal terms of reference guiding the work of the IEP, IRM Program staff, and national-level researchers. The document builds on the draft Concept Note circulated and put up for public comment in July, 2012 and incorporates many of the high-level public comments submitted during the consultation period. The role of the Steering Committee will be to discuss any outstanding issues within the draft and to officially endorse the guiding principles—in effect, handing off management of the IRM to the International Experts Panel. A draft version of the document can be found with the public post of the Steering Committee documents.

Timeline: The OGP Articles of Governance, drafted almost a year ago, set out an aggressive timeline for IRM reporting, which will not be feasible in the IRM’s first year. The Articles of Governance establish that the reports will be made available 4 months after the initial submission of an Action Plan. Because this is the first year of the IRM, it is more important to get the process for reporting done correctly, rather than simply on time. For that reason, at the December meeting the Steering Committee will consider moving the date for hard launch to October of 2013, the date of the next OGP Plenary. This will allow for full convenings of the IEP, hiring and training of local researchers, and adequate time for high-quality participatory research. This first round of reports will cover the 8 initial OGP founding countries.  A second round of reporting for the remaining 50+ countries will proceed thereafter.

Public comment: As mentioned above, the original IRM Concept Note was put up for public comment in July and a number of civil society organizations and private sector actors made public comments on the concept. The OGP Support Unit assembled the major categories of public comment and the IRM Program Manager has responded to each of these. In general, the comments were (a) incorporated into the Guiding Principles Document; (b) included in a forthcoming draft of the IRM Concept Note; (c) will be decided upon at a later date by the IEP (and thus included in an internal IRM Method Discussion Paper); or (d) some combination of the preceding elements. While the Steering Committee will not likely take any decision on these documents, the process for responding to public comment may be “noted” by the Steering Committee. This has the potential effect of creating an emerging practice consistent with OGP’s commitment to meaningful participation.