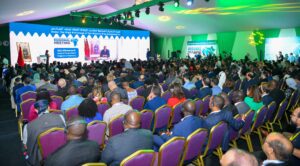 Marrakech, Morocco. – Today, more than 600 people from Africa and the Middle East came together in the name of building more open governments in the region and to accelerate sustainable development and economic recovery in Africa.

From November 1 to 3, the 2022 OGP Africa and the Middle East Regional Meeting, co-hosted by the Open Government Partnership and the Kingdom of Morocco, convened ministers, heads of local governments, parliamentarians, activists, civil society advocates, and researchers from all over the region to discuss ways to leverage open government approaches to deliver public services more efficiently, specifically by tackling corruption, boosting digital innovation, enhancing access to justice, and strengthening civic participation.

The Head of Government of Morocco, Aziz Akhannouch, welcomed all participants to the country and called on all African countries to push the openness agenda forward and promised that Morocco would lead by example. “This meeting is a historic moment in enhancing partnership and collaboration for members within the region,” said Head of Government Akhannouch.

The Minister of Digital Transition and Administration Reforms of Morocco Ghita Mezzour highlighted the importance of digital innovation to improve public service delivery. “This meeting is as an opportunity to create principles of good governance and a nimportant moment in the international quest for development.”

Sanjay Pradhan, Chief Executive Officer of the Open Government Partnership, called on OGP members to redouble efforts to push ambitious government reforms that can tackle the confluence of crises the region is facing, from economic challenges. “Here in Morocco, “Twiza” – meaning collaboration – is a traditional practice where people join together to contribute to a shared cause. So let us join together in this spirit of Twiza to put citizens at the heart of governance. Let us advance ambitious open government reforms that deliver better democracy for and with citizens. Let us help realize that precious, precious promise – a government that truly serves its citizens, rather than itself.”

Stephanie Muchai, member of the OGP Steering Committee also stressed the importance of meaningfully engaging and involving civil society voices in the decision-making process so government reforms reflect the needs of citizens and creating safe spaces for CSOs to operate in. “The values and objectives of the Partnership cannot be meaningfully promoted and implemented while the civic space remains closed, repressed or dangerous for the reformers you see here today; and others not with us. This needs to be a priority that member countries will take up to open up and champion in the region.,” said Muchai.

Over the next three days, participants will participate in sessions, panels, workshops and other activities to exchange ideas and experiences in order to come up with solutions to the most pressing challenges and create a more open and prosperous Africa. Click here to access the event’s agenda.

In 2011, government leaders and civil society advocates came together to create a unique partnership—one that combines these powerful forces to promote transparent, participatory, inclusive, and accountable government.

OGP works by bringing government and civil society together to co-create two-year action plans with concrete commitments across a broad range of issues. This model – which has produced thousands of commitments – allows civil society organizations and direct citizen engagement to play a role in shaping and overseeing government.