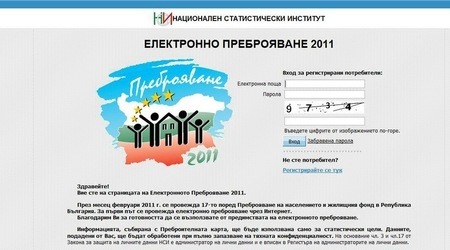 During a recent visit to Bulgaria, the European Commissioner for the Digital Agenda, Neelie Kroes commented on the digital development in Bulgaria – both the good and the bad. The conference she attended, Digital Agenda for Europe: Reality or still a Challenge,– outlined quite well the duality of the situation one of the EU’s newest Member States. Although boasting one of the fastest broadband connectivity in the world, access to government online services and e-commerce is lagging far behind in Bulgaria.

One of the positive examples that Commissioner Kroes noted on her Twitter account was the eCensus effort of Bulgaria. During the 2011 census, a new system was introduced that made gathering data on the population faster, cheaper, safer and more precise. As a result, 3.1 million people or 41.2 per cent of the population was counted online. This is quite impressive considering this type of solution on this scale is something new for the country. An extensive information campaign was essential for this effort. Filling the forms was made easy – users only had to register with an email and personal ID number, enter all relevant information and then receive a unique code identifying the data submission. Then, the census workers only needed to collect the codes. This allowed for less errors in the data, less time spent for questioning, greater security as people didn’t need to let anyone in their property, and finally an estimated €2 million in saved costs.

Lots of lessons can be learned from this experience.

Firstly, the age distribution of eCensus was interesting – a third were aged 30-39 and another third 40-49.This is remarkable, because it indicated the openness of older generations (the so called “digital immigrants”) in Bulgaria for such Internet services.

Secondly, governments should listen to and engage with their citizens online. Like any other system, this one wasn’t without it flaws. The Bulgarian blogger community responded quickly with reports and advice on how to avoid the issues. The main takeaway here is that this experience showed both the public and the government are ready for digital solutions to Bulgaria’s pressing problems. Commissioner Kroes also discussed  the issues with freedom and transparency of the press and openness of the government. Many of the journalists who were part ofthat discussion are working for novel online media outlets who thrive on new technologies and the trust Bulgarians have in the web. Open data, open government and eGovernment services are important tools in the toolbox of these journalists. Much like the eCensus, they can be essential for pinpointing underlying issues and engaging the public in serious discussions.