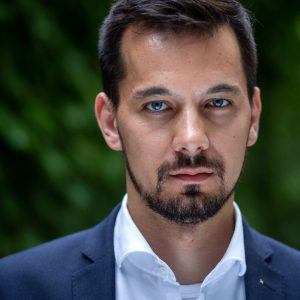 The ability to lead a dialogue – personal, community, and nationwide – in the times of social media and information overload is our biggest challenge

I am going to start with three different frames that might seem out of context. Frame one: it is 6:55am on Monday, 26 February, 2018, when my phone buzzes with the message: “an investigative journalist and his fiancée have been murdered”. Frame two: it is 1:30am on Monday, 5 March 2018. Seven young people are gathered in a living room of a small apartment, finalising a press release demanding an investigation and calling for a “new trustworthy government”. They soberly sign the document. Frame three: it is 5:15pm on Friday, 9 March 2018. I am standing in a Bratislava square filled with nearly seventy thousand people. There are three steps in front of me and a microphone to the left. A deep breath and a greeting to the thousands – the gathering For a Decent Slovakia is about to begin.

These frames are primarily personal. Tossed right into the course of my nation’s history, I await my own reaction and that of the community.

The brutality of Jan Kuciak´s and Martina Kusnirova´s murders affected large masses of people in Slovakia and abroad because they linked everyday innocent life with the power of the state. The murders revealed how some politicians diminished politics. They viewed “politics” as an opportunity to acquire assets for themselves and for those close to them. It was the absence of reflection that should have followed the young people’s murders, together with the overall state of the country, which sent people into the streets.

The long-lasting absence of a reflective dialogue resulted in politics being viewed as something not meant for the ordinary person, let alone something an ordinary person could significantly impact. Sprinkled with a populistic fear of the unknown, such as migration, power was shifting from the hands of ordinary people to authoritarian alpha males.

The fallibility and unsustainability of this kind of politics was clearly shown by the For a Decent Slovakia gatherings. Peaceful, determined, and non-violent, the demonstrations called for citizen-centric politics. Politics, what authentically might be called “service”. This kind of reaction may well be a response to the democratic deficit in current political discourse and the winning streak of populists, linked to the rhetoric of fear and hatred.

These challenges cannot be taken on by daily mass demonstrations. The answer lies in the incorporation of politics into people’s daily lives. Citizens are an active part of a community’s story and should participate in community dialogue.

This transition to authentic dialogue requires further steps. It is clear that these must originate from both sides – citizens and the state – both of which need to meet halfway.

The time has come, especially in post-communist countries, to get rid of the mindset that politics only concerns our parliaments and is something dirty and corruption-riddled. Politics is the ability to develop ideas and solutions that help make our lives and the lives of those around us better. It is also the ability to co-create and be part of a community that wishes for and realises such solutions.

Depending on the level of complexity, the variety of solutions, and the size of the community, we can also talk about the degree of politics. Yet, in principle, politics is also the ability to convince people about the necessity of home renovation, and the passing of laws that lead to road and highway renovations. The key element here is not the difficulty of the problem, but the authentic participation of individuals in finding solutions, otherwise referred to as the subsidiarity principle or the decentralisation of power.

Steps taken by the state should include the setting up of mechanisms that engage citizens in the shaping of their environment. When using the term ‘state’, we somehow think of geographical borders, airports, large cities, or mountains. However, talking about individuals and the state leads us to the idea that the state primarily comprises our surroundings and the community we live in. It is therefore the state’s job to ensure that communities, made up of individuals, are heard and engaged. Methods used to achieve this should include decentralisation, open dialogue between citizens and institutions, as well as an active education towards broad common dialogue.

The ability to lead a dialogue – personal, community, and nationwide – in the times of social media and information overload is our biggest challenge.

This type of politics will naturally bring about leaders or “politicians” who view communities, regardless of their size, as fellow citizens and not as marketing targets.

Without bearers of change none will occur, and without change, no real bearers will come. The circle, as old as democracy itself, is not closed, however. Quite the contrary, it can be entered at any time. It is a highly interpersonal matter filled with dialogue – the relationship between I and Thou and I and Us. Active community dialogue is a way of overcoming the crisis. A deep breath and a greeting to the thousands – this is a start of a dialogue that makes public affairs personal and that allows personal affairs to become public.