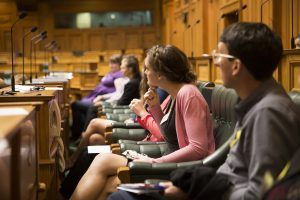 As a voluntary partnership emphasizing collaboration, OGP puts its trust in the power of ideas. Governments are encouraged to adopt bold reforms that address urgent public policy challenges, learning from and inspiring each other along the way. This emphasis on big ideas drives the nearly 3,500 commitments in more than 190 action plans since OGP was founded in 2011.

This guide showcases a selection of twelve commitments from OGP action plans that the OGP Independent Reporting Mechanism (IRM) awarded “star” status in its latest cycle of reports (for more information on how the IRM awards stars, refer to the Annex). These twelve star commitments were picked because they have shown evidence of early results, representing major steps forward in relevant policy areas and transforming “business as usual.”

Our goal is to share continually new commitments that are awarded star status in IRM reports. Star commitments should encourage a race to the top among OGP members by highlighting ambitious and innovative approaches to tackling major public policy challenges. Two “notable” commitments are also featured in this publication. These reforms narrowly missed achieving star status, but both represent major steps forward for government openness and changed the status quo in their respective countries. They serve as examples of reforms that surpassed initial expectations to achieve notable success. By drawing attention to these ideas, we hope government and civil society reformers will adopt and adapt them in future action plans to push the frontiers of open government in their countries.