We are pleased to publish OGP’s 2016 Annual Report, authored by staff in the Support Unit and Independent Reporting Mechanism. The report serves to capture a significant year of growth, reflection, and activities, as well as shine a spotlight on how OGP is working to tackle some of the most critical issues of our time. 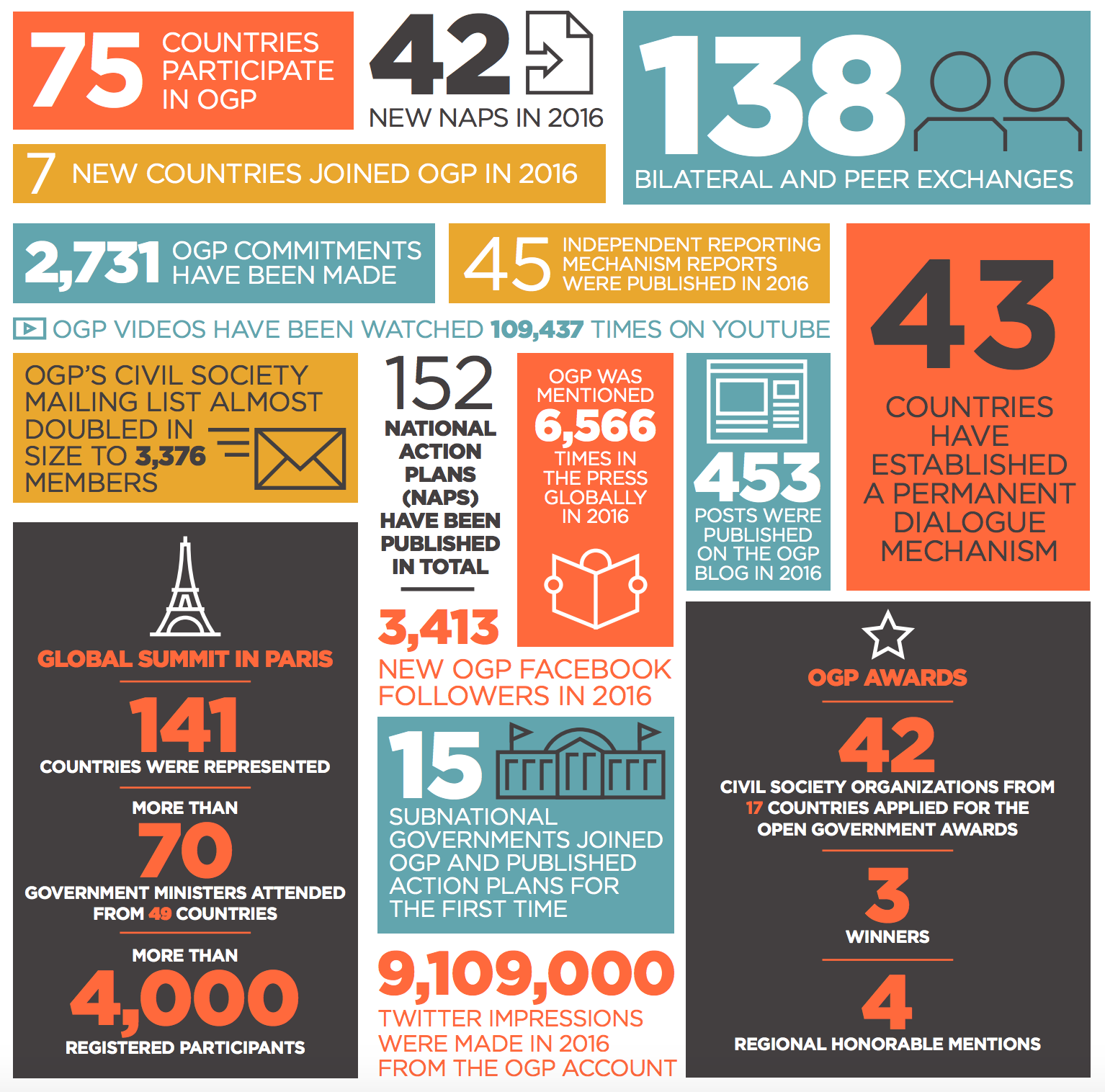 Throughout 2016, OGP sought to offer a positive vision for a deeper, more participatory democracy, placing citizens at the heart of governance. This was a strong message at both of OGP’s main events last year: the fourth OGP Global Summit in Paris, which took place in December, and the organization’s fifth anniversary at the United Nations (UN) General Assembly in September. At both of these landmark events, heads of state and civil society leaders called on OGP to be at the forefront of tackling issues— such as a lack of trust in government, elite capture and grand corruption, and closing civic space—that are at the heart of many of the world’s governance challenges.

With this in mind, OGP decided to undergo a Strategic Refresh to explore how we could deepen our impact through the partnership. OGP has a simple but powerful goal: that governments should truly serve and empower their citizens. The current four-year strategy states, “OGP’s vision is that more governments become more transparent, more accountable, and more responsive to their own citizens, with the ultimate goal of improving the quality of governance, as well as the quality of services that citizens receive.” Consequently, over the next five years, OGP’s success will be measured not only by the increased number of countries and commitments but also by increased government transparency, participation, responsiveness, and accountability, all of which benefit ordinary citizens. This requires a greater focus on supporting reform efforts, both in government and civil society, in OGP countries to build a national and global movement for open government and, ultimately, to demand reforms on issues they prioritize.

OGP also underwent a period of intense reflection and learning in 2016, culminating in an independent evaluation of our progress. The findings show that the national OGP process has helped many countries establish institutional mechanisms that give continuity and legitimacy to open government reforms. Furthermore, the process has helped accelerate dialogue and co-creation between reformers and has been a platform to initiate reforms that have started to change the status quo and benefit citizens. This Annual Report profiles many of these achievements and outlines the breadth and depth of the work done by different parts of this amazing partnership.

But OGP has the potential for much greater impact. Co-creation processes need to have meaningful outcomes, the ambition of National Action Plans (NAPs) should be increased, and OGP as a whole must become smarter at navigating the politics of the most complex reforms. As this report shows, OGP need not start from scratch. The partnership’s experience, adaptability, and commitment to the cause are now stronger than ever, and these elements provide the foundation for countries to implement more transformative open government reforms, ensure credible implementation, and improve the lives of citizens.

There are hundreds of stories open government reforms and accomplishments which we weren’t able to capture in this report, but we hope to do so in other publications during 2017. Thank you to everyone who supported the work of OGP in 2016. We look forward to working with our partners around the world to offer a positive global movement for openness and deeper democracy, and as a countervailing force against the rise of closed government and its manifestations, including restrictions on civic space, corruption and distrust in government.