Open Government Awards – a well-deserved celebration at the United Nations

Last week, in the presence of 10 Heads of State and hundreds of civil society leaders from around the world, OGP hosted its first annual Open Government Awards (Awards) ceremony at the United Nations. Government and civil society teams stood up among the audience as Alejandro Gonzales announced the top 10 finishers, greeted by enthusiastic applause. It was an exhilarating moment for OGP and a celebration of concrete results through a rigorous and transparent global competition.

A few months earlier when OGP was designing the 2014 Awards competition, there was unanimous agreement that the theme should reflect one of the core values of OGP – citizen engagement. The theme was essentially asking the question – how are governments involving citizens in designing and implementing public policy and services, how has the process benefited both government and citizens, and is it a sustainable program? We wanted to shine the spotlight on those government reformers who were breaking barriers to implement and scale up ideas, actively partnering with civil society and truly inviting citizens to engage with their government. The Awards were acting as the incentivizing vehicle to draw out these reformers, and stimulate a race to the top among OGP participating countries.

Thirty-three countries applied – most of them joint applications between governments and civil society organizations. An international cast of 22 judges from 20 countries, representing governments, civil society, multilaterals and the private sector scored each application. When the results were calculated, the initiatives that finished in the top 10 were all rich in content but extremely diverse in terms of their approach. While the Peruvian initiative invited children’s ideas to help the city council meet their needs, the Danish initiative legally empowered senior citizens to have a say in local government policy. As Igor Vidačak, one of the judges noted, reviewing the applications was a “wonderful learning experience and truly inspiring to see so many great initiatives”.

As the teams were announced and they stood up, we hope that they looked around and found faces of allies who were working toward the same goal. We hope that the thrill of being honored at a global event with 10 Heads of State and an audience of over 600 participants will send a powerful signal to other reformers that this moment could be theirs next year. And if their Head of Government is as spirited as the Prime Minister of Denmark, they may even land a photo-op with the President of the United States…! 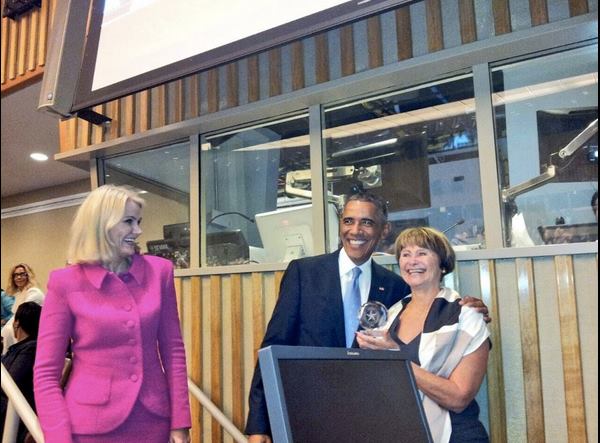 So stay tuned for the announcement of the 2015 Open Government Awards!