SIGA2013: We are democracy, we are the government 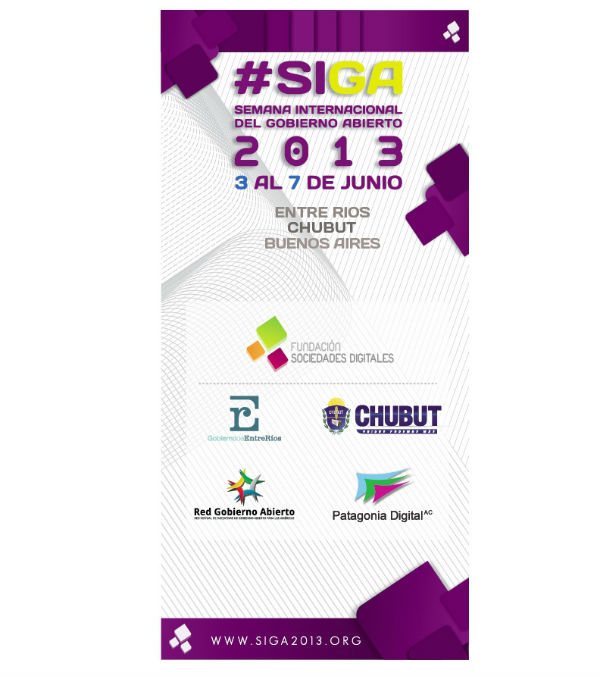 Four years ago it was pure utopia to think about an event around Open Government and its trends in Spain and Latin America. A group of young people came together and decided to create Fundación Sociedades Digitales (Digital Societies Foundation), a civil society organization focused on strengthening both public and private sector in the use of ICT and Open Government as a way of achieving new standards for public administration.

The first edition of the International Week on Open Government (SIGA) took place in 2010 in Buenos Aires, Argentina. For the very first time, national government officials joined businessmen, digital entrepreneurs, and OGov thinkers and doers to discuss ideas as well as alternatives to make them happen. An open forum for the debate had started. The networking around SIGA was essential for the first attempts of OGov implementations in Argentina, and the ideas rumbling in those days were translated into the first collaborative book on Open Government written in Spanish: ‘Open Government – Gobierno Abierto’.

Ever since 2010 the path has been of growth and expansion. If Open Government is government with the people, then we understood we had to be where “the people” is and empower them. So, this year the third edition of SIGA will face the challenge and embrace a whole week of activities in three different cities. Starting on June 3rd in Parana, province of Entre Rios, SIGA2013 will be officially opened by local minister of Communication and Culture, Pedro Baez. Governor of Entre Rios, Sergio Urribarri, stated early this year his conviction about “digital societies converging into a more true democracy.” He has valued the active listening as a way of involving in community concerns. “Open government makes me a better governor”, he said.

On June 4th SIGA will move a 100 miles south to Patagonia, to the city of Puerto Madryn in the province of Chubut. There, Governor Martin Buzzi has supported the event and hosted it with enthusiasm. “In Chubut we believe in an administration open to citizens, and in citizens committed to their own government”, he says, “We live Open Government as an action in progress.”

“We can lead the debate through SIGA because we have all the voices we need to broaden the picture, always there and eager to participate”, said Fabricio Vagliente, president of the foundation. “Having prestigious political scientists as Oscar Oszlak in our panels and learn from them as we move on with different experiences on terrain is a privilege and an honor.”

Sebastián Lorenzo, one of Argentina’s pioneers on Open Government and creator of the SIGA, has always remarked the amazing profile Latin America has as a fertile soil for Open Government. “Administrations are responsive and create constant dialogue with their citizens,” he states to prove that the roads are opened from the cultural side of the challenge. “Open Government is the answer to a historic moment and there’s no way we can chose not to be part of it, but we can chose between leading or run after it”. “We chose to lead,” he concludes deeply convinced of being facing the construction of new paradigms.

SIGA2013 will end in Buenos Aires city, from June 5th, with three entire days of interesting topics, new debates, well-known voices and projections about the future around citizen participation, transparency, open data, open source software, technology and public administration, data journalism, and Internet governance. For us, SIGA is still a collaborative construction and we welcome it. We the young and crazy Latin-Americans who thought this was the change we were waiting for, have created a sanctuary where ideas run all over the place without permission, debates build up and take a stand, and the future starts every day. SIGA2013 Video: http://youtu.be/5rOSfvwqG9Y Twitter: @sdigitales