The Open Government Road Ahead: Co-Creation during the implementation of Australia’s first National Action Plan

A couple of weeks ago, I wrote a blog which outlined what the OpenAustralia Foundation team has been up to in helping develop Australia’s first OGP National Action Plan.

In August 2016, civil society members proposed a formal dialogue mechanism between government and civil society be established to progress the development of the NAP. The PM&C team responded positively and showed a willingness to take on board feedback to improve OGP consultations. An Interim Working Group (IWG) was appointed by the Federal Government with representatives from both government and civil society. Civil society members of the IWG (myself included) used the working group as an opportunity to push for improvements in the scope of the NAP, including the inclusion of commitments on integrity and new commitments on public participation. These were not initially on the government’s agenda. Some big ticket items are, however, still pending and we hope that the ongoing engagement on OGP and open government will create opportunities to make progress on these areas.

To make sure we give Australia’s open government reform commitments the best chance of retaining their ambition and relevance to citizens’ lives, it’s vital that civil society stay closely involved.

The Open Australia Foundation will continue to engage with the process in the following ways:

Working with the Interim Working Group on the way forward

The Interim Working Group has its work cut for itself in this crucial next phase of the OGP cycle. This group now has to perform a couple of big infrastructure ‘build the plane as we’re flying it’ maneuvers. In true OGP style, the IWG has to co-create a way for government, civil society, and non-government stakeholders to meet regularly and work together effectively. This is the focus of reform commitment 5.1, to design a multistakeholder forum that has the agency and capacity to oversee the NAP. The due date on creating that forum is upon us now. Our current working group meets this week. The OGP Multistakeholder Forum handbook outlines an example (and quite ambitious) timeline, setting out activities for developing a forum is 8 weeks. If we kick off in our meeting, and use this template, we could still aim for a strong June finish. We’ll need everyone’s best efforts to deliver on this important commitment to keep the open government plan on track. 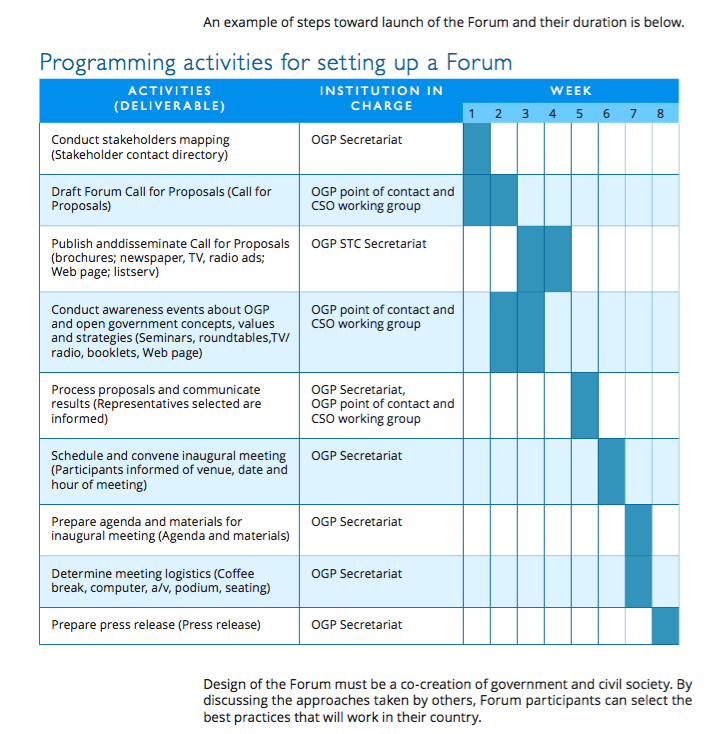 The Interim Working Group remains responsible to further develop and oversee 15 open government reforms. There are also important roles for civil society organisations and other non-government actors to play on the implementation and monitoring of specific commitments. The IWG, together with government agencies leading each of the commitments, will identify these groups. Charities, smaller non-governmental organisations, grassroots, and informal community groups, all have enormous experience and deep insights into problems that this NAP seeks to solve. We need these groups to come forward and participate. Successful partnership between civil society and government is essential to the success of OGP’s platform for action.

Here’s what civil society can do right now:

There are a bunch of commitments that are closely connected with the work that the OpenAustralia Foundation does to open up government. We’ve previously written about, gathered data, and provided evidence on issues that are part of this reform agenda. Also, as part of this OGP National Action Plan, we’ve drafted, contributed to, commented on, solicited, and provided feedback for commitments that form our NAP. But we are a tiny team and need to focus our work on where we can be most helpful and effective. As luck would have it, the timing of our next planning meeting couldn’t be better! Shortly, we will review this work and look at our objectives to determine how we can best connect with Australia’s involvement in OGP alongside all our other work. Sign up for updates at OpenAustralia Foundation blog.

(Side note: If you’re ever in Sydney, Australia on the last Tuesday of the month, consider coming along to our next pub meetup.)

The Australian Open Government Partnership Civil Society Network (aka. AOGPN or the Network) and its Steering Committee were brought together quickly when the Prime Minister Turnbull recommitted Australia to OGP. This pragmatic and cooperative group adapted the UK network’s open model & resources, to establish the Network quickly.

Initially formed in November 2015, the steering committee committed to hold elections within 18 months of forming the network. Now with the first NAP underway, there’s little time to regroup, reflect, and evolve. Here’s what we need to do in the coming months:

Finally, a Civil Society Review of Australia’s first OGP National Action Plan is now underway. The review, which uses the UK’s Involve civil society review tool, is a parallel, independent assessment of the ambition and openness of the NAP. It is not part of the official Independent Reporting Mechanism (IRM) but the review may be taken into consideration by the Australian IRM researcher.  A number of other countries have chosen to participate in this parallel process to facilitate learning and improvements during the OGP cycle. For Australia, the timing of the review happened to be just as we launch into implementation of the NAP, a perfect time to build in commitment details that will keep the NAP on course to deliver tangible measurable benefits to citizens.

Clearly, even as Australia implements its NAP, there’s co-creation in many different areas to look forward to in the coming months. By mid-winter Australia, the IWG might even be able to establish the first iteration of a open government multistakeholder forum, to institutionalize partnership and collaboration between government and civil society in driving the open government agenda forward in Australia.