The Promulgation of a People Driven Constitution: Challenges and Opportunities 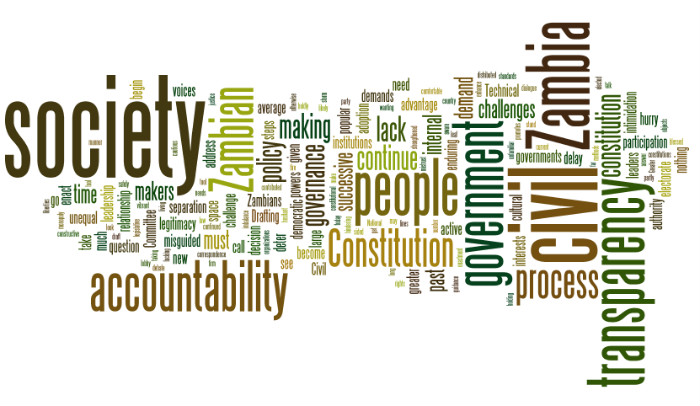 Since independence, Zambia has had no enduring constitution partly due to lack of legitimacy, as a result of adoption methods, as past constitutions have been imposed on the people by previous rulers and the people at large have had nothing to do with the adoption of these documents, which have remained unfamiliar objects and far from resonating with the hopes and aspirations of the average Zambian. Outsiders may wonder why Zambia has continued to fail to enact an enduring constitution and why past and successive governments continue to delay the process in as much as the people of Zambia have longed for a document that will contribute to the development of systems, procedures and practices of good governance, a constitution that will not only regulate the framework of state institutions, people’s rights and liberties but ultimately shape how power is utilized and distributed in a democracy-through transparency and accountability.

The simplest answer to this question would be that there is an imbalance in the popular control over decision making in Zambia.

The relationship between policy makers and the electorate is highly unequal and one sided, it is controlled by an elite monopoly of the few, who unfortunately have also taken advantage of the cultural concept that elders or those in authority know best and thus it is against cultural norms to question those in authority or in this case leadership positions.  In Zambia, today the President can fire Senior Ministers for copying correspondence to him with Permanent Secretaries.

So what is civil society doing to help the situation?

Zambia is blessed to have an active and vibrant civil society that has been given the space to maneuver and influence decision making; however, the current crop of leadership in civil society faces a number of challenges which include a lack of transparency and accountability, lack of capacity to lobby and advocate government and misguided direction in engaging the Executive or the legislative in a constructive manner. This coupled with the challenge of getting the voices of the individual Zambians to boldly demand for transparency and accountability in governance has greatly contributed to the erratic pace of Zambia’s democratic process.

The challenges that have faced civil society have been brought about by internal weaknesses leading to civil society being cautious on how much transparency it should demand from government as they too face a similar challenge. Government is not in a hurry to meet civil society demands on more openness as it appears to be comfortable to play to the gallery of the media on steps being undertaken towards greater transparency, while hindering the space for civil society through the implementation of the NGO Act, a piece of legislation that is a tool of political intimidation and only a handful of organizations can stand firm against any forms of intimidation.

The fact remains that past and successive governments will continue to be hesitant in giving in to demands of greater transparency from civil society or hurry to enact a Constitution that promotes the same because it is aware that civil society cannot afford to look itself in the mirror. What the Zambian government will do is continue to delay the process until such a time that it feels that it has safely sailed the storm and safeguarded its interests against those of the Zambian people and cooperating partners at large. The government will continue to take advantage of opportunities that will see a divided civil society and will stop at nothing to see increased mistrust amongst civil society and deter them from advocating for the enactment of people driven constitution. Sadly, the average Zambian citizen will remain continuously misguided and lacking information to demand for transparency and accountability from both civil society and government.

Civil society needs to be able to read between the lines and quickly begin to go through an internal revival; with the new leaders taking bold steps to clean up house otherwise it will be meaningless to call on government to be open and transparent. In order to promote and strengthen democratic governance in Zambia, civil society must put in place measures that will first address internal accountability, deter the misapplication of donor funds, breaches of policy and lack of separation of powers between respective boards and their technocrats. Civil society must be seen to be walking the talk as this will enhance organizational credibility and legitimacy and at the same time it will encourage any successive government to take a leaf. Greater transparency and accountability will go a long way to equalize an unequal relationship between policy makers and the electorate which has given rise to weak institutions, low popular participation, poor accountable and transparency in governance and a non responsive government.

If Zambia is to address these challenges, there is an urgent need to conclude this constitutional making process, there is need for the active participation of the people in the debate and dialogue of the making and finalization of the Zambian Constitution and the people must begin to participate and get their voices heard. Once this is done, it will not only become easy for the country to build an inclusive democracy that values the separation of powers and the rule of law while at the same time the upholding of justice will be strengthened with elected leaders wanting to embrace accountability and shifting this accountability away from party interests to the people, and the standards of living for Zambians likely to improve.