Starting in 2011, governments from different countries in the region decided to join a global initiative that fosters transparency, accountability, and open information as transformative tools. Within this perspective and its various accompanying political and social contexts, open government began to be viewed as a conduit for change in the quality of life of our democracies and for the citizenry that inhabits them.

Two weeks ago, during the Open Government Partnership’s Regional Summit of the Americas, which brought together more than 2,000 people, a discussion took place on the way in which we view and understand open government. Without a doubt, many of us agreed that open government provides a favorable framework of action for eradicating the ancient practices of secrecy and decision-making behind closed doors that are all too common to our region. Nonetheless, it is not possible to build countries with solid and legitimate institutions if we do not progress from transparency, citizen participation, and accountability to concrete actions that influence decision-making in the public sphere.

The degree of institutionalization revealed by these practices does not give rise to any doubts regarding the adhesion of these processes to the concepts of political determination, especially when based on the adoption of legislation within the realm of openness and access to information. According to a study performed by Directorio Legislativo, 14 countries in the region passed more than 122 executive decrees and laws on transparency and open government. This information implies that, on average, each one of these countries (1) is creating at least nine new regulations in the field annually, a comparatively greater number than the annual average of laws that are passed in other areas, such as the one or two annual laws pertaining to health and/or education that are endorsed each year. 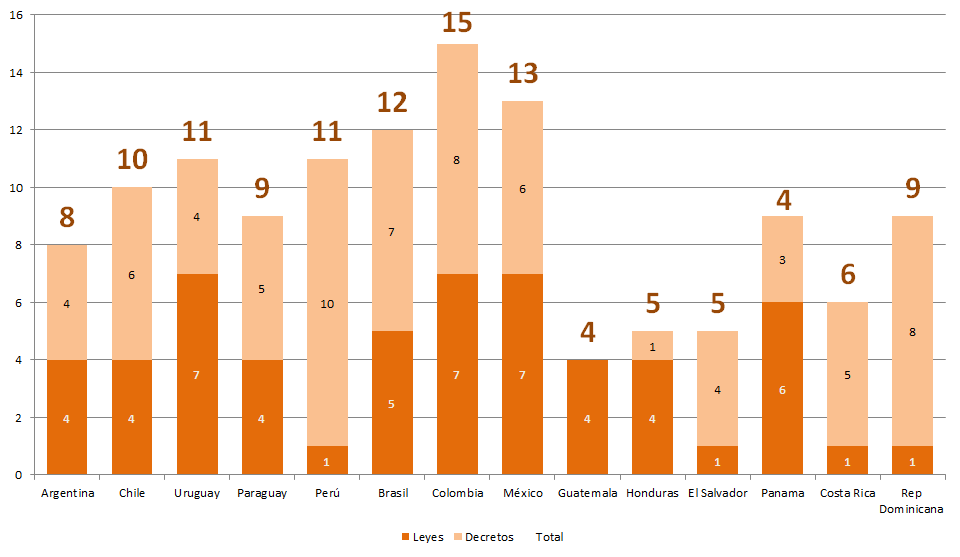 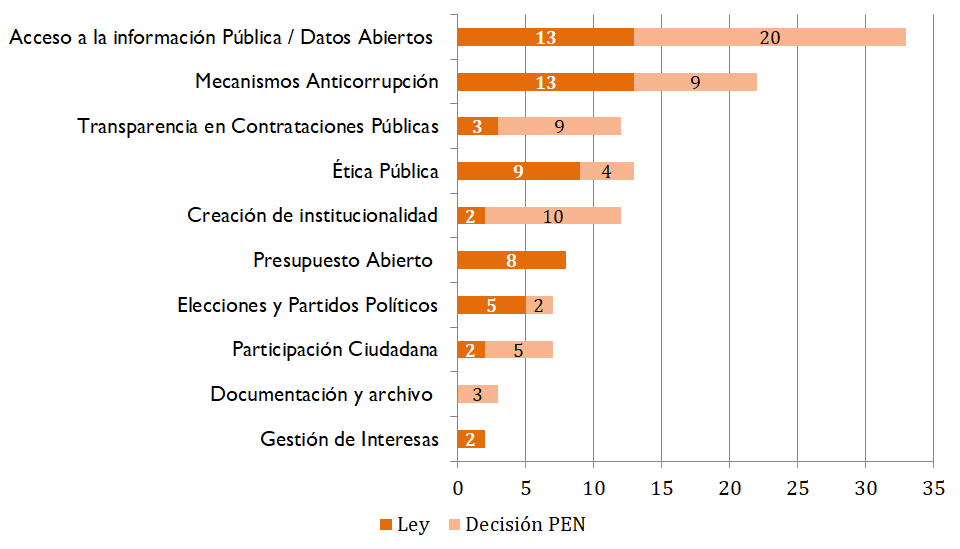 Of these 122 laws and decrees, 33 referred to openness of information and open data, 22 were related to anti-corruption mechanisms, 12 focused on transparency in public contracts, 13 were in reference to ethics in the public sphere, and the rest were spread across the creation of institutionalization, open budget, political elections and parties, citizen participation, documentation and archiving, and, lastly, lobbying interests. 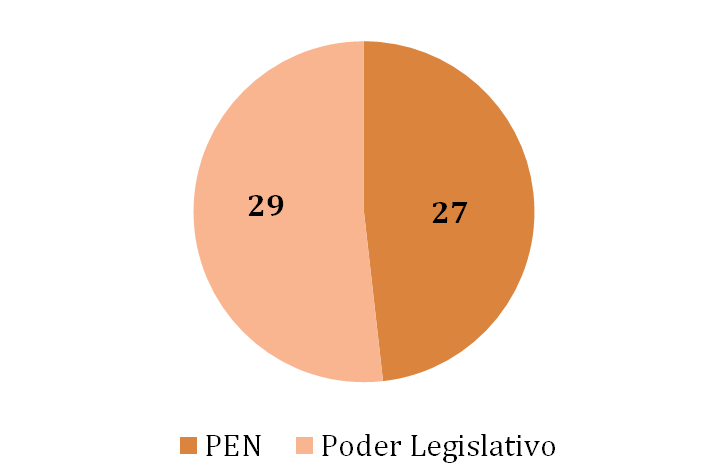 A striking fact is that 56 of the laws passed show certain parity in terms of source, while 29 originated in the Legislative Branch and 27 in Executive Branch. This shows that in many cases, the open government agenda is imprinted not only in our central administrations, but also in our Parliaments.

Growth of countries that joined OGP… (4)

In the midst of this regulatory panorama, it is appropriate to also inquire how the OGP’s own agenda has grown within each administration: these reforms have also translated into state bureaucracy growth, budgetary increases, and the formal creation of spaces for dialogue between civil society and the government.

At the time of joining the Open Government Partnership, three countries had a person working on the process, while the rest had a team of between two and five people. Nonetheless, as the process moved forward, all except one added people and resources to the area dedicated to the OGP agenda. The same has occurred with regard to spaces for co-creation and spaces for dialogue. In the beginning, eleven did not have fluid dialogues with their governments, two had informal spaces, and only Uruguay had a more fluid channel of access. Today we have twelve countries with formal and permanent spaces, not counting Peru and Brazil, where these practices are currently suspended.

Unfortunately, the numbers point to real life facts that may not be transformative for us. The open government agenda in our countries should respond to the central problems experienced by a region that is besieged by political, social, and economic inequalities. We cannot talk about open government when human rights violations continue to exist, such as the current situation in Mexico, the cases of corruption affecting half the lawmakers in Brazil and Guatemala, the prevalence of decision-making behind closed doors, as was almost the case with the election of the Ombudsman in Argentina, and the countless reports filed by members of civil society in Latin America regarding their low level of impact on the open government agenda.

We have to be able to agree on concepts, and open government – and the participation and transformation that emanate from it – has to mean the same thing for everyone. It is not the same to be in the Open Government Partnership as it is to use the tools that it provides for the transformative process. We understand that civil society in the various countries is very clear on this; what remains to be seen is whether the governments are equally willing to undertake this commitment. We should not get mired in discourse but rather seize this opportunity for change. 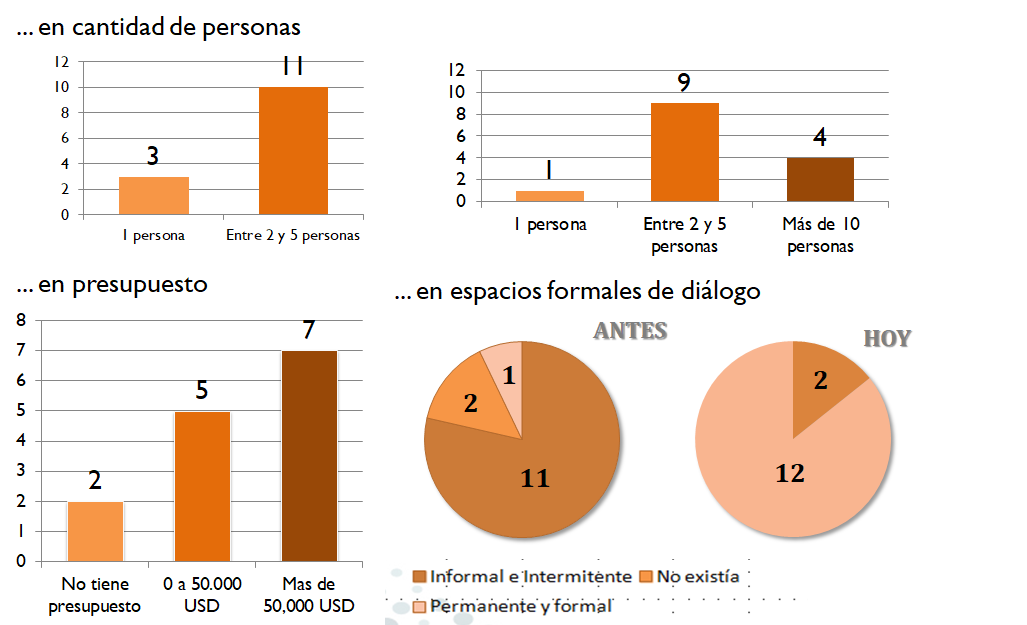