This is the fourth in a six blog series written by winners of the IDRC grant for research on OGP.

The Open Government Partnership (OGP) has 69 participating countries around the world, with over 2,000 commitments made and countless citizens and civil society members involved. Learning from past experiences is essential to moving the OGP forward and helping to better craft and implement commitments. The first round of Independent Reporting Mechanism (IRM) reports has shown that, while some countries completed most of their commitments, others did not. Many commitments have seen only limited progress, or even none at all. In this short research paper, I sought to answer the question: Why are some commitments more likely to be completed than others?

To answer this question, I used data from the OGP Explorer based on IRM evaluations of each country’s commitments, on the 33 second-cohort countries covered with adequate data by the first round of IRM reports. IRM researches coded commitments both on their characteristics, such as their potential impact and their level of specificity, and on the extent to which they were actually completed (I considered commitments that were coded as either “complete” or with “substantial” progress). However, these commitments also need to be considered in context of the countries that made them. Thus I also considered country-level information such as democratic institutions, economic development, and factors associated with the OGP process itself. I used hierarchical models for multilevel data in order to simultaneously combine commitment-level and country-level information.

What did I find? First of all, my results showed that comparing implementation across countries is a complicated task. It is not sufficient to simply compare the average rate of commitment completion from country to country, since not every commitment is identical. Consider two hypothetical countries that both completed half of their commitments, and so would appear to have made identical progress. However, suppose that the first country’s commitments were primarily “easy” to complete – low potential impact, small in scope, and already underway – while the second country’s commitments were “hard” – high potential impact, large in scope, and brand new policy goals. Should these two countries’ equal completion rates be judged as truly identical?

As this example makes clear, the composition of National Action Plans should matter for how we assess countries’ progress towards implementing them. The method used in my study allows for comparison of national completion rates after adjusting for the composition of each country’s commitments. The figure below compares these new adjusted rankings to unadjusted rankings based solely on the average completion rate for each country. 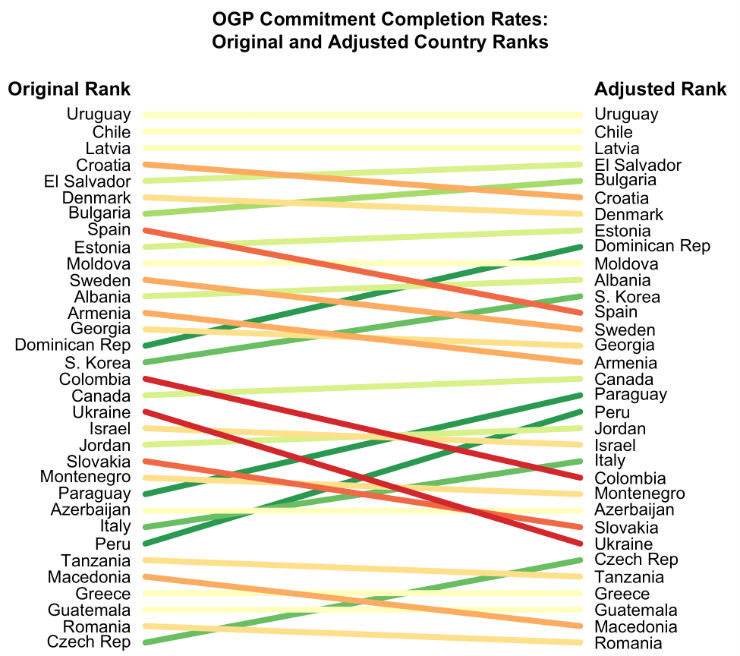 Turning to country-level findings, the results highlighted two factors external to the OGP process: democratic institutions (measured using data from Freedom House) and the level of corruption (measured with Transparency International’s Corruption Perceptions Index). More democratic countries and less corrupt countries were more likely to complete their commitments. This suggests that countries where government is already more open to begin with tended to make greater implementation progress. On the other hand, there were no statistically significant results for any factors internal to the OGP process, such as public consultation or civil society involvement.

More details can be found in the study itself, available here.