As a part of its commitment to government transparency, the Government of Indonesia (represented by the President’s Delivery Unit for Development Monitoring and Oversight), National Secretariat of FITRA (The Indonesian Forum for Budget Transparency, a CSO concerned with budget transparency in Indonesia), and International Budget Partnership, recently launched  Open Budget Index (OBI) Survey Results in the ASEAN Region on February 26-27, 2013.

This event was intended to introduce the OBI and its methodology and to become a form of regional outreach of International Budget Partnership in ASEAN Region. The guests were government officials and civil society representatives from ASEAN Countries. They shared their experiences about dealing with budget openness during the panel sessions and focus group discussion (FGD) sessions. Based on their presentations in the panel session and FGD sessions, there are two categories of countries in the region in terms of budget openness.

The first category consists of countries that have political will and legal instruments in budget openness, but experience difficulties with the implementation. South Korea, Indonesia, and the Philippines are included in this category.

The second category consists of countries whose governments lack political will in budget openness and have less concrete efforts in pursuing fiscal transparency. Malaysia, Singapore, Thailand, Vietnam, Myanmar, Cambodia, Brunei Darussalam, and Laos all fall into this second category.

The problems faced by the countries in the first category are more technical rather than substantial. Those countries have the legal basis for budget openness, but technical issues hinder implementation. Such issues vary, from the sudden shock of the bureaucrats managing an administration with an “open” culture to the lack of access to technology. Even countries like South Korea experiences difficult situation during the application of budget openness; it still triggers friction between government bodies and other parties, such as legislative institutions and CSOs. Those countries need technical assistance from more experienced countries dealing with openness issues. Moreover, they need to change the culture in their administrations that promote openness.

Different dynamics take place in the countries of the second category. The governments still perceive budget information as a sensitive political issue. The ruling governments are concerned about the risk that the opposing parties would use the budget for political purposes. This situation is worsened by the lack of  awareness; they have not realized the importance of their right to know how their governments gain revenue and where that money is spent.

Consequently, the CSOs in the second category continuously promote the importance of budget transparency. They hope that the people will become more aware of this issue, and that demand will grow afterwards. Encouragement from international and regional communities, such as ASEAN, is expected to complement this action, since it will create an additional reason for the countries to show good intention in opening their budget information.

Another notable outcome from the sessions was the need for open budget as a regional norm in ASEAN and the OGP to support it. The European Union, for example, considers including Open Budget Index as part of its accession criteria. Meanwhile, the African Union is developing their regional standards of budget openness. So, perhaps the ASEAN could initiate similar policies as well. The OBI event became a place for governments and CSOs to share their experiences and solutions to improve budget openness in their countries. From this event, we hope that budget openness will be a shared norm in the region – and trigger positive changes in the realm of transparency and accountability within the governments in ASEAN. 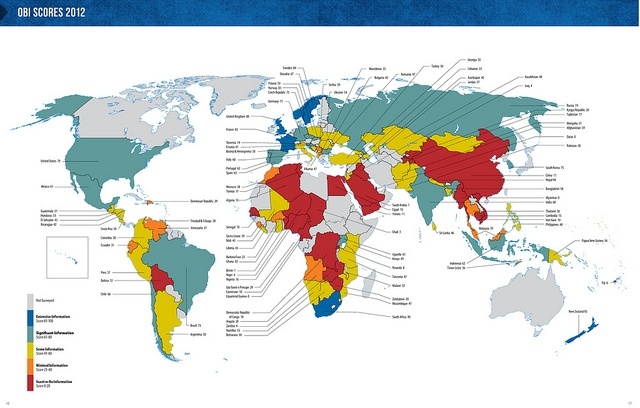