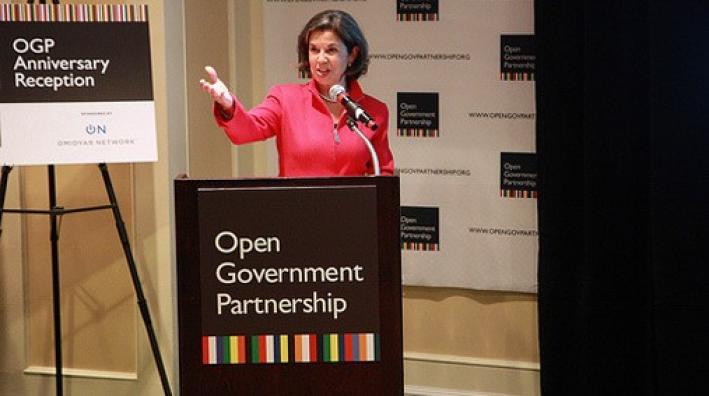 Maria Otero serves as the Under Sec. of State for Civilian Security, Democracy, and Human Rights.

When President Barack Obama helped launch the Open Government Partnership (OGP) last year, no one could have predicted that it would capture the imagination of the international community as it has. In just one year, 57 governments have joined OGP and made more than 300 specific commitments to be more open and responsive to their citizens. These commitments, as contained in National OGP Action Plans, will impact nearly two billion people around the world.

This is truly impressive progress, but it’s not enough. And so, as we celebrate International Right to Know Day, we also celebrate the deepening commitment to open government — both globally and within the United States. As the U.S. Government works to fulfill our own open government commitments, we are also working to make real the promise of OGP as a results-based partnership between governments and civil society. At the same time, we remember that — while commitments and Action Plans are important — these commitments must also be met with action. That’s why, as we embrace OGP’s second year, we will be working with other governments and civil society organizations to ensure that all OGP governments are able to deliver on their promises. This is a tall but necessary task. How will we achieve this? By deepening relationships with civil society, and getting a report card on progress through an international and independent review which will detail how we — as governments — are doing in implementing our OGP Action Plans.

OGP must continue to strengthen its ties with civil society. This is because, as British Prime Minister Cameron pointed out earlier this week at OGP’s First Year Anniversary event in New York, OGP belongs to all of us – both governments and citizens. A robust civil society is critical to making sure governments are responsive to the needs of their people. Civil society engagement helps us ensure that governments know what is working — and what isn’t — as they implement their Action Plans. As Rakesh Rajani — the head of one of OGP’s active civil society partners, Twaweza – put it at the anniversary celebration, “the mark of success for OGP is not how many countries sign on, but how many commitments they deliver.”

To this end, OGP’s new Independent Reporting Mechanism will also help ensure accountability, as it brings together objective policy experts to evaluate a government’s progress and make recommendations for improvements. For our part, we are moving forward to implement the 26 specific initiatives announced by President Obama in the U.S. Action Plan. They aim to increase public integrity, ensure effective management of our resources, and improve the way we deliver services. As just one example of progress to date, the United States launched “We the People” – an online tool which makes it easier for citizens to launch and sign petitions directed at WhiteHouse.gov, directed to the U.S. Government. So far, more than 3 million people have signed nearly 50,000 petitions, enthusiastically endorsing their interest in making direct requests for government action. Last month, we also fulfilled another OGP commitment by making this technology available for other governments to use. And just this week, the White House fulfilled another OGP commitment to increase transparency in foreign aid, by instructing all federal agencies in the United States to publish data on the Foreign Assistance Dashboard regarding the foreign assistance they provide.

These steps, taken within the framework of OGP and our fundamental belief in a citizens’ right to know, underscore our firm commitment to promote openness and transparency in government.After all, that’s what OGP is all about. Not just enlisting partners and obtaining commitments, but leading by example and helping build societies that are more open, more just, and more prosperous.