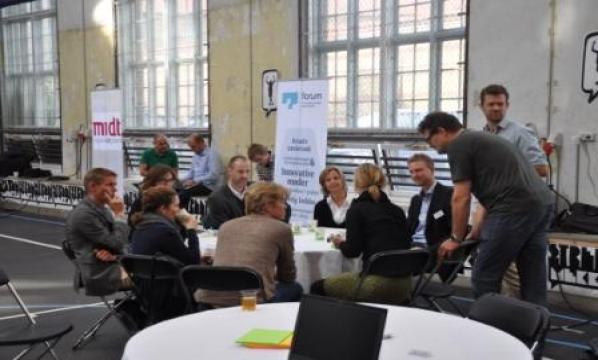 Last week (25th September), the Danish national Open Government Camp was held in Copenhagen.  Open Government is being practised in isolated little pockets around the the country, often by small units of passionate civil servants who drive change through their everyday work effort.  The event allowed the little pockets of open government practitioners, offering them an opportunity to connect and discuss ideas in the open movement. The camp was held in a converted factory which now serves as a new kind of community centre where various volunteer groups organise sports activities, DJ-ing classes, events, parties and other activities. The venue and practical  arrangements were intentionally kept as basic as possibile, in fact bordering on austere, to provide only a rough frame for the camp in order to encourage participants to take responsibility for the actual creation and running of the camp.

The camp discussed topics including: – citizenship and citizen initiatives, – democracy and collaborative decision making, – open government data, – open source development, – social media, relationships, networks and crowdsourcing, – collaborative innovation, – innovation culture and leadership, – public-private partnerships and ecosystems. One of the attendees at the camp described the atmosphere at the event  as a “.. this is the beginning of a beautiful friendship” feeling which provided affirmation and encouragement to those who already make an effort to open up government as well as to those who would like to. The general concept of the camp as a ‘do-it-yourselves’ event is most certainly worth repeating, and it is likely that another national camp will be organised, possibly as an initiative in the Danish Open Government Partnership Action Plan 2013. However, in order to remain agile and innovative, the next national camp may well be integrated into other events, or be expanded to cover new types of activities, or in other ways be evolved and improved. Open government is work-in-progress and so should another camp be.