The Evolution of Open Government in Canada

Open government is about greater openness, transparency and accountability, strengthening democracy through meaningful engagement, as well as driving innovation and economic opportunities. Meaningful progress on open government requires providing the public, the media, and the business community greater access to government information and data. Open government is not a clear-cut concept. It’s an umbrella term for a variety of related ideas and initiatives, bound by some common threads. It means different things for different people in different countries, and even in Canada the term has changed over time. This post will focus specifically on one OGP participant, Canada, and explore how open government has evolved throughout its years. 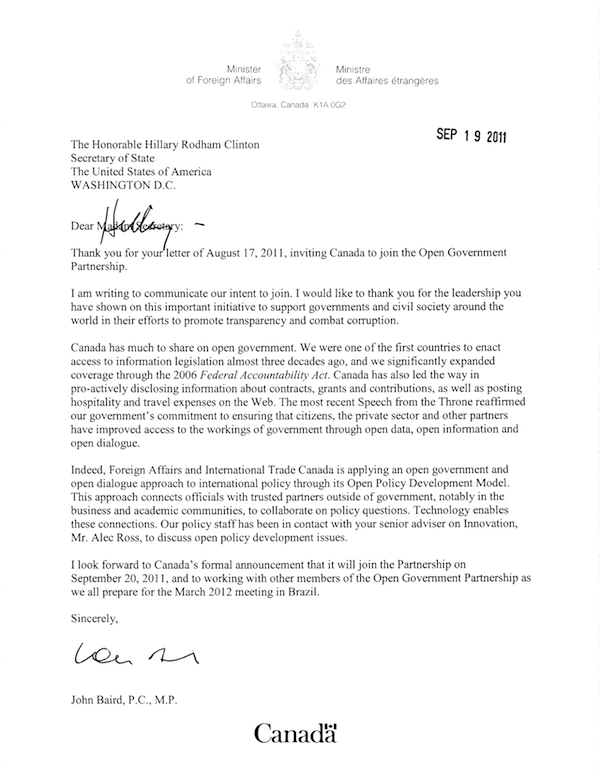 One could consider the 1985 Access to Information Act as a reasonable starting point. Or, you could go back to the late 1700s when printers started publishing parliamentary reports in England, and after public protests, officials stopped opposing it. Thomas Curson Hansard, an English printer, was printing these reports in the early 1800s, and the name was carried into Canada: from Parliament 1, Session 1 in 1867 until today.

A more contemporary view might point to the international Open Government Partnership (OGP), an inter-governmental initiative launched in 2011 to secure commitments from governments for greater transparency, citizen engagement, and anti-corruption practices.

In Canada, as in many countries, the open government push really developed with open data. Open data means machine-readable data that can be freely used, re-used and redistributed by anyone (researchers, developers, journalists, transparency organizations, the private sector… anyone). In March 2012, Canada launched data.gc.ca to be a searchable repository of open data. At the time, Open Government was understood as a practice that makes data and information freely available to citizens, businesses, non-profit organizations, and academia, encouraging information sharing and innovation.

Later on in 2012, came a public statement of commitment in the Canada’s Action Plan on Open Government 2012-14. Within one year, the definition of Open Government in Canada changed. In the action plan (2012) it was described as:

“Canada’s commitment to open government is part of the federal government’s efforts to foster greater openness and accountability, to provide Canadians with more opportunities to learn about and participate in government, to drive innovation and economic opportunities for all Canadians and, at the same time, create a more cost effective, efficient and responsive government.”

A few years later in 2014, there was a lot of time dedicated towards two-way dialogue and asking Canadians what their vision of open government was. Here’s what they said: 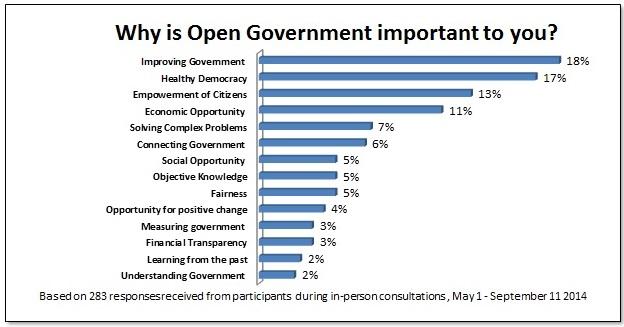 From the What We Heard report on consultations for Canada’s Action Plan on Open Government 2014-16.

Throughout the years, the focus on two-way dialogue increased by leveraging social media platforms to spark open conversation. Tools such as Twitter and Facebook began to gain prevalence in the Government context as a methods to engage with citizens. Now, open government is not only about releasing information, but also about creating avenues for Canadians to engage and participate in governance.

In late 2015, the Government of Canada released a report on the progress of 2014-16 commitments called the Mid Term Self-Assessment on Action Plan 2014-16. The report highlights what the government has accomplished within those years, which includes: changes to Government of Canada policy and legislation, the release of more data and information, the launch of a community-led open data institutes, and major changes in the government’s web presence. Again here, we see the definition of open government changing.

There has been great progress in the direction of open government, encompassing transparency, openness, two-way dialogue and citizen engagement – and the answer to “what is Open Government?” is progressively always evolving. The reason for its evolution, in my opinion, is due to open government being a concept and not a tangible thing. Some disagree, and would argue that open government is a thing because it can be measured, such as how much data the government releases.

To explain my point, let’s use a comparative example, such as family. Some might believe that family is a measurable thing, but really what can be measured is genetic relation using science. Those who do not share the same blood, such as step parents or adopted kids, are they not considered family? Family is a concept that has underlying values such as love, forgiveness, sharing, caregiving, etc. And as such, the concept “family” is different in every household, and its definition evolves based on subjective experiences. Similarly, open government is a concept that has underlying values; transparency, two-way dialogue, access to information, delivery of public services, citizen engagement, anti-correction practices, and more. These values can be supported and measured by data, but the umbrella concept of open government is ultimately a state of mind. That is why the definition of open government changes year by year, because open government is a promise to citizens that can take many different forms.