We’re hijacking the Oscars. Join us? 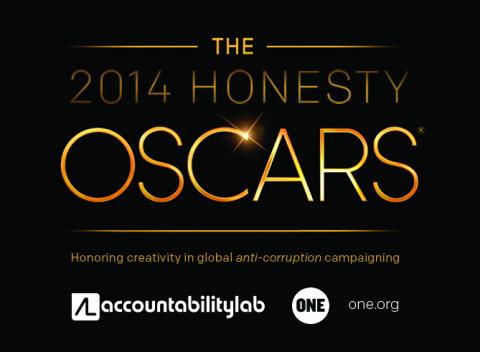 This post originally appeared on ONE.org and has been republished with permission from the author.

The upcoming Academy Awards is a time to celebrate the best films, actors and behind-the-scenes players in Hollywood – so why not do the same for the incredible videos, infographics and songs that help fight global corruption through creativity and innovation?

ONE is teaming up with Accountability Lab for the Honesty Oscars 2014, a week-long event to honor groundbreaking organizations, activists and creatives who make our world more transparent and hold our governments and corporations more accountable. Basically, we’re hijacking the Oscars.

From February 24 to 28, Accountability Lab will reveal their top nominees for a category (just like the Academy Awards, we’ll have “Best Picture”, “Best Visual Effects” and more) each day – and readers will get the chance to vote for their favorite. Winners will be announced on March 2, in step with the 2014 Academy Award announcements.

The nominees will be announced in a blog each day here: http://www.one.org/us/stories/transparency/. Here is the voting schedule:

You have until March 2, at 6:00pm ET to vote, and keep an eye on Twitter (@ONECampaign) on Oscar night to find out who wins! All the winners will be announced formally on Monday, March 3.

Executive director Blair Glencorse of Accountability Lab, “chair” of the Honesty Oscars, knows a thing or two about creativity. His organization encourages African citizens to use self-expression through film, music and more to show the community why transparency rules. Join him as he unfolds his favorite corruption-fighting creative on ONE.org the week of February 24.

Check here on Monday to vote for the first category!