What Does it Mean When Heads of State Talk About OGP?

I don’t think I’ll ever get over the excitement of hearing a sitting Head of State promote OGP on the public stage. This was the case earlier this month in France, when President Hollande signed his country’s new National Action Plan in the presence of his guest, Mexican President Peña Nieto. And it happened again over the weekend, when US President Obama, joining Kenya President Kenyatta, spoke of leveraging OGP in order to promote the rule of law. 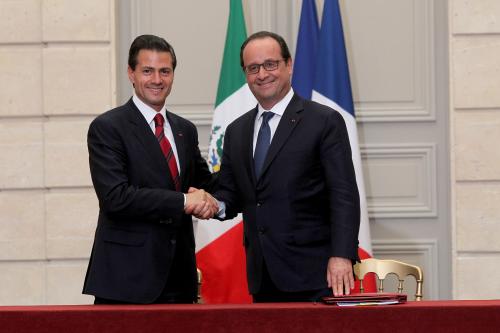 In the meantime, 2015 was already shaping up to be a big year for the OGP in Africa: with Cabo Verde recently announcing its intention to join the eight other African countries* in the partnership; South Africa preparing to become OGP lead chair later this year, and Tanzania hosting the OGP Africa Regional Meeting in Dar es Salaam in May 2015. This however is news of a different sort as it underscores the potential of OGP in action, and emphasizes the need for domestic reformers to work together within the partnership in order to drive tangible change.

When President Obama first launched OGP at the United Nations in September 2011, jointly with seven other countries and nine civil society leaders, he expressed his belief that “the strongest foundation for human progress lies in open economies, open societies, and in open governments”. President Kenyatta picked up this thread in 2013 (in the third pillar of his campaign manifesto) when he committed his government to “uwazi”; Kiswahili for “openness”.

While in Kenya, President Obama applauded Kenyatta’s efforts to reinvigorate his country’s domestic open government agenda, as well as its continued efforts within OGP. Obama also committed to a continuation of US bilateral support for good governance and anti-corruption efforts, and a partnership with the American Bar Association to provide technical assistance on implementation throughout Africa.

Of course all of these speeches and promises will be in vain if they don’t lead to real change. But I believe these recent shout-outs are a further sign that, although not yet four years old, OGP is understood to be an initiative with great potential for changing the way governments interact with their citizens. I believe world leaders understand that with our framework of National Action Plans, OGP offers a brilliant mechanism to channel political will into concrete actions towards greater transparency and accountability. I also believe they truly value the opportunity OGP provides for civil society to become an equal partner in the process and the role the IRM plays in guaranteeing positive attention for countries moving forward on reform – while shining a light on those who might try to use OGP for “open-washing”.

You’ll be hearing a lot more about OGP in the next few months particularly in relation to the Sustainable Development Goals, Climate Talks and during the OGP Global Summit October 27 – 29 in Mexico City. Please feel free to contribute your voice to the discussion by sending us blogs at communications@opengovpartnership.org.