What steps to increase fiscal transparency and participation should OGP countries take in their next Action Plans? 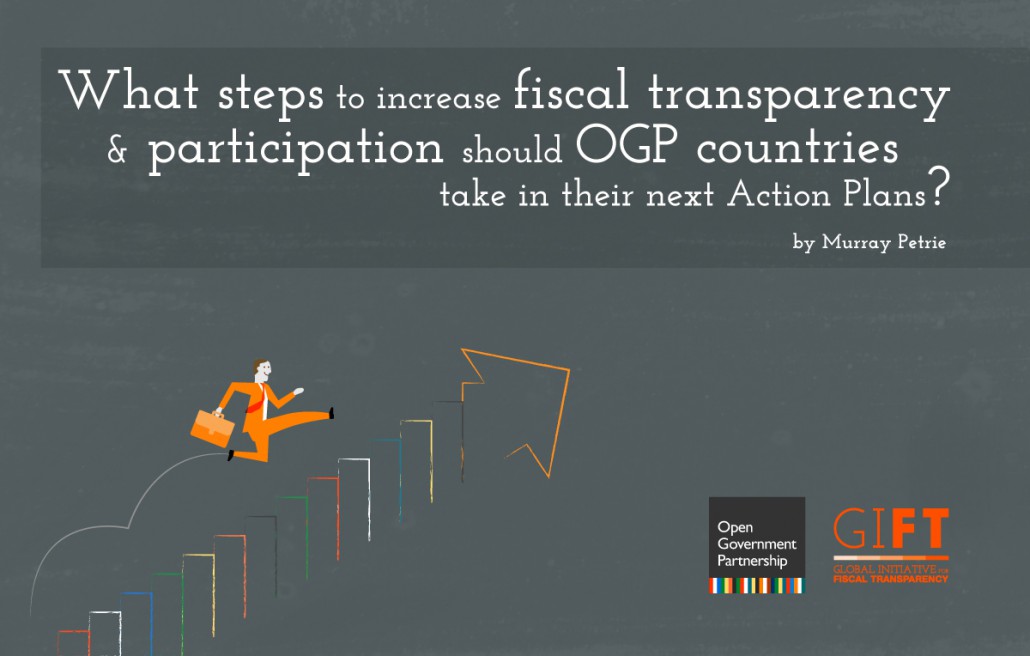 This post is the first in a short series that GIFT ran to provide ideas for countries preparing their next Action Plans. Two further blogs looked at how well countries have implemented their OGP commitments on fiscal transparency, and how transparent and participatory budgets and budget processes currently are in OGP countries. The posts draw on a series of GIFT papers, ‘Fiscal Transparency in Open Government Partnership Countries, and the Implementation of OGP Commitments: An Analysis’, prepared for successive meetings of the OGP-Fiscal Openness Working Group, and on GIFT case studies of public participation in fiscal policy.

Fifty-one countries are currently preparing their next OGP National Plans of Action, so this is a great time to look at what commitments they should consider on budget and fiscal transparency.

Budget transparency is a key area: it is one of the four requirements for membership of the OGP; and fiscal transparency commitments made up around one third of all the commitments in the first 51 Action Plans.

‘Fiscal transparency’ can sound dry and technical, something for the ‘experts’ rather than of interest to ordinary citizens.

Nothing could be further from the truth! Fiscal transparency is essential to fight corruption, which predominantly hurts the poor and marginalized. Transparency and broad-based public deliberation – as opposed to lobbying by elites behind closed doors – are important determinants of whether public infrastructure such as hospitals, schools, roads, electricity and water supply are well planned, well built, and well maintained; public services are of good quality and generally deliver what the public wants; and tax officials are honest in their dealings with taxpayers. 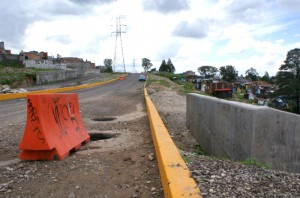 The importance of effective, accountable and inclusive institutions is also recognized in the UN’s 2030 Agenda for Sustainable Development, while the Addis Ababa Accord on the Third International Conference on Financing for Development established in its action agenda that transparency and equal participation in the budgeting process will be increased.

But aren’t OGP countries already transparent and open in how they manage fiscal policies?

No, they are not. Over 60% of the 47 OGP countries in the 2015 Open Budget Survey (OBS) were rated as providing ‘insufficient budget information to the public’. And the rate of improvement is very slow – in fact the average increase in budget transparency between the 2012 and 2015 OBS was even lower for OGP members than it was for non-members. Average OBS scores for public participation across the budget cycle are even lower – much lower – than the scores for transparency. Further details on levels and trends in budget transparency and public participation will be in a subsequent blog.

Countries should develop their OGP Action Plans in a much more open and participatory way.

In developing their next Action Plans countries should create more opportunities for meaningful public participation in the design and implementation of fiscal policies over the whole budget cycle, as well as in the delivery of public services and the construction of public investment projects.

In doing so OGP members should put into effect the GIFT Principles of Public Participation in Fiscal Policy as well as follow much more closely the OGP requirements for public participation in the development and implementation of Action Plans than has generally been the case to date.

Mexico and the UK provide interesting examples of how the process of Action Plan development can be made more participatory over time. Mexico set up a three-part governing system for its first Action Plan, headed by a tri-partite commission, the STT, led by the Ministry of Public Administration, the Federal Institute for Access to Information and Data Protection, and a coalition of CSOs. However, the first Mexico Action Plan went through two phases, and the initial Action Plan submitted in September 2011 lacked significant civil society participation. A second ‘expanded’ plan was made in close collaboration with civil society and released in early 2012.

In the UK, the first Action Plan was developed by government with very little public input (as was the case for most cohort 1 countries). The second Plan 2013-2015 was co-created with civil society over 12 months, and was intended to be a model of OGP principles and processes for developing an Action Plan. Recommendations made by the UK Civil Society Coordinators’ after the Plan was completed included that civil society should form a network to engage government; that government and CSOs should agree a process to develop the plan; that lead OGP officials should connect relevant policy officials with relevant CSOs to form working groups; and that both government and CSOs have responsibility for expanding group of stakeholders involved.

What are some of the outstanding fiscal transparency and public participation commitments in the first generation of OGP Action Plans?

What are some of the leading international examples of public participation in fiscal policy?

It is instructive to look outside the OPG to some of the new and innovative practices being implemented around the world to engage the public much more directly in discussing fiscal policies and/or monitoring how well they are implemented in practice.

Brazil’s Public Policy Management Councils: more than 50,000 on-going (bi-) monthly councils, at all levels of government, in which officials and civil society representatives deliberate and decide on new budget policies and monitor implementation.

Croatia’s Legislative Oversight: Parliament’s Finance and Central Budget Committee, that oversees all stages of the budget cycle, has up to six external non-voting members. The Committee conducts public hearings in which testimony is heard from the external committee members.

Kenya’s pre-budget consultations: the Ministry of Finance holds public hearings around the country during budget preparation, and there is a further two week window for public consultation on the Budget Policy Statement before it is submitted to the legislature.

The Philippines Bottom Up Budgeting: local Poverty Reduction Action Teams of officials and CSOs throughout the country identify projects to be funded by the participating national agencies from the national budget.

These are all examples of emerging good practices for OGP countries to emulate in their action plans.

What are some of the key general areas where OGP member governments, legislatures and Supreme Audit Institutions, and CSOs and activists should now be considering action to increase budget transparency?

The first point is extremely important: many OGP countries could achieve rapid increases in budget transparency just by publishing documents that are already produced for use within government. This is a matter of political will, and of citizens demanding information that they have a right to.

Based on data from the 2015 OBS, budget reports that were produced for ‘internal use’ but not published as at 2014 were as follows:

Second, the 4 OGP members that do not meet the minimum fiscal transparency requirements for OGP membership should give priority to publishing the Audit Report. Malawi and Tunisia do not produce an Audit Report, while Liberia produces one for internal use only. Spain produces an Audit Report, but publishes it too late to be considered publicly available.

Third, those OGP members that have gone backwards on fiscal transparency in recent years should give priority to decisively reversing this trend. These include Macedonia (a change of -19 between the 2012 and 2015 OBS), Ukraine (-16), and Bosnia and Herzegovina (-7).

Fourth, there are some very important budget reports that can be produced and published with relatively little effort – such as a Citizens’ Budget (not published in 12 OGP countries at the time of the 2015 OBS), and a Mid-Year Review of budget implementation (not produced in 21 OGP members). Examples of OGP commitments to increase public understanding of budgets include:

Fifth, transparency of spending on the delivery of core public services should be increased, and more direct input enabled from service users on their needs and on their perceptions of the quality of services. Examples of Action Plan commitments in this area include:

Outside the OGP, the World Bank’s BOOST tool for public expenditure analysis is a new data tool that allows users to trace and analyse budgets for public services down to the points of service delivery – where a country’s IT system contains sufficiently detailed data. For example, in Moldova, BOOST enables users to drill down on spending to the level of individual schools and universities to see how budgets are allocated and actually spent, by who, and whether funds are reaching the areas of greatest need.

Six, commitments should enable citizens to participate more in the planning and delivery of public investment projects. Examples include:

More generally, commitments to strengthen public procurement are in many Action Plans. Those for which the IRMs reported reasonable implementation progress include Brazil, Croatia, Georgia, Hungary, Indonesia, Mexico, Moldova, Paraguay, Philippines, and Uruguay.

Seven, key oversight institutions should be strengthened. Legislative committee budget hearings should be opened up to the public, and consideration given to setting up an independent research office to advise the legislature on budget issues; the independence and resourcing of the Supreme Audit Institution should be ensured; and social auditing should be introduced or extended e.g. CSO monitoring of the quality of public services, as described above in South Africa. 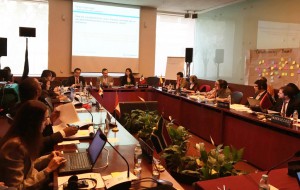 GIFT stands ready to assist countries with the design and implementation of their OGP fiscal transparency commitments. The OGP-Fiscal Openness Working Group, which is coordinated by GIFT, has since 2013 been providing regular venues for OGP ministry of finance officials and their country counterpart CSO representatives to engage in-depth on topics of common interest, providing a platform for peer to peer sharing and learning, offering access to international good practices, tools, and technical expertise, and supporting OGP members to develop more ambitious fiscal openness goals and commitments. GIFT has specifically offered its assistance to the cohort of countries currently preparing their next Action Plans. Please contact us and let us know what issues you are grappling with in your country or the areas where you could do with some additional technical support.