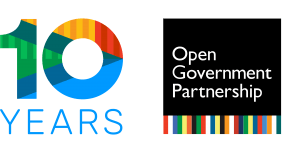 The Open Government Partnership (OGP) has grown rapidly since its founding 10 years ago. OGP today includes 78 countries, 76 local governments, and thousands of civil society organizations. Together, they have made more than 4,500 reform commitments in more than 300 action plans.

Moving into its next 10 years, OGP has an important opportunity to look back and assess whether the platform is working as intended: Are governments and civil society collaborating to design reforms? Are governments implementing the reforms they commit to? And, importantly, what predicts success, and what can we do about it?

To address these questions, in this report, we—the OGP Support Unit—review data covering nearly 200 OGP national action plans submitted between 2012 and 2020. This includes assessments from OGP’s Independent Reporting Mechanism (IRM) and from other governance organizations. The goal is to understand where the action plan process is working well, where it needs improvement, and what this means for future OGP strategy.

The report covers four main areas of analysis. This summary outlines the key findings in each:

Civil society engagement is a core component of the OGP model. OGP members co-create action plans and engage in regular dialogue with civil society through platforms like multi-stakeholder forums on open government. In the paper, we find—for the first time—statistical evidence that the strength of this civil society engagement predicts[1] positive outcomes. We also find that civil society is becoming more involved in OGP, though several gaps remain.

Substantive civil society involvement is correlated with stronger OGP outcomes. We find that civil society engagement throughout the OGP process is associated with more ambitious commitments, higher rates of implementation, and stronger early results (see Figure 1), even after controlling for factors like region, governance, and commitment to OGP: 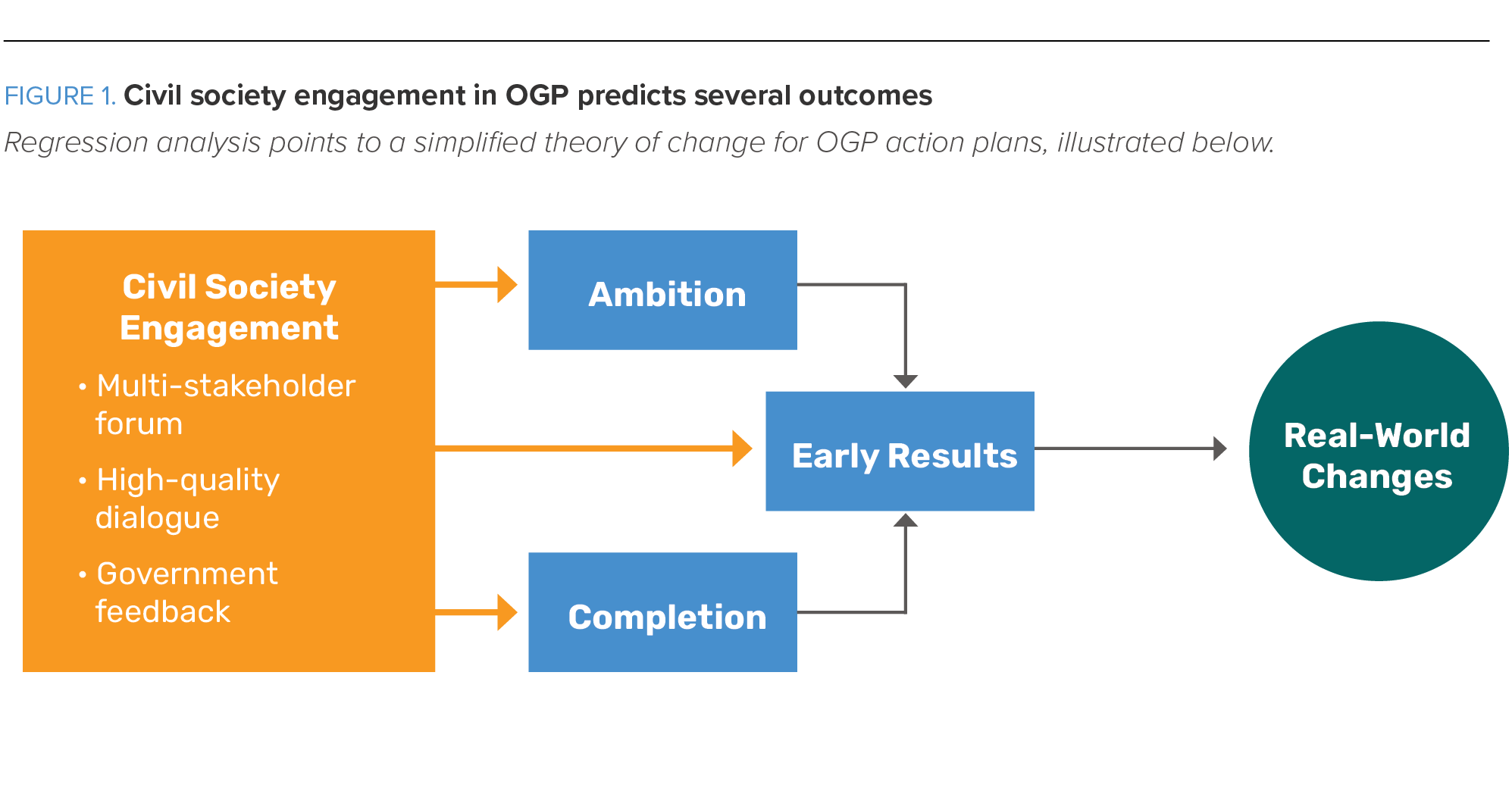 Civil society engagement in OGP is improving, but gaps remain

OGP processes are becoming more participatory over time. The level of public influence in designing action plans has increased significantly (see Figure 2). In most countries, government officials no longer just inform or consult civil society about the OGP process—they engage in back-and-forth dialogue. More countries have also established, or are establishing, multi-stakeholder forums. Partnership-wide factors may be driving these improvements, including increased peer learning, expanded guidance, and more technical support from partners. 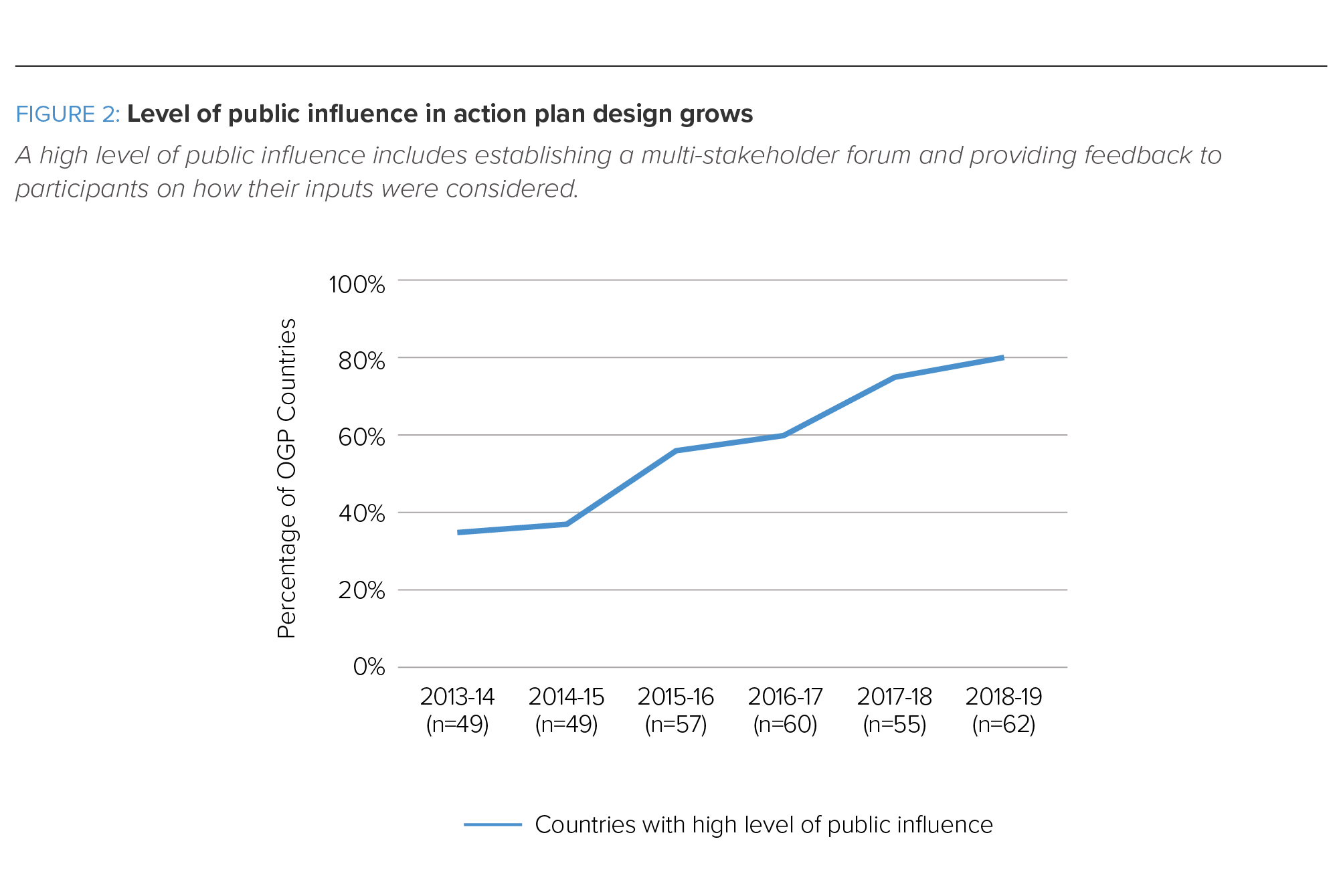 However, gaps in civil society involvement remain. For example, country performance is mixed on minimum requirements to remain active in OGP. Most countries have established multi-stakeholder forums, but government feedback to participants poses a challenge. Only half of the countries maintain a repository of proceedings and progress, and fewer than half respond to participants on how their inputs were considered (see Figure 3). In addition, about a quarter of OGP processes are not fully open to anyone who wishes to participate. 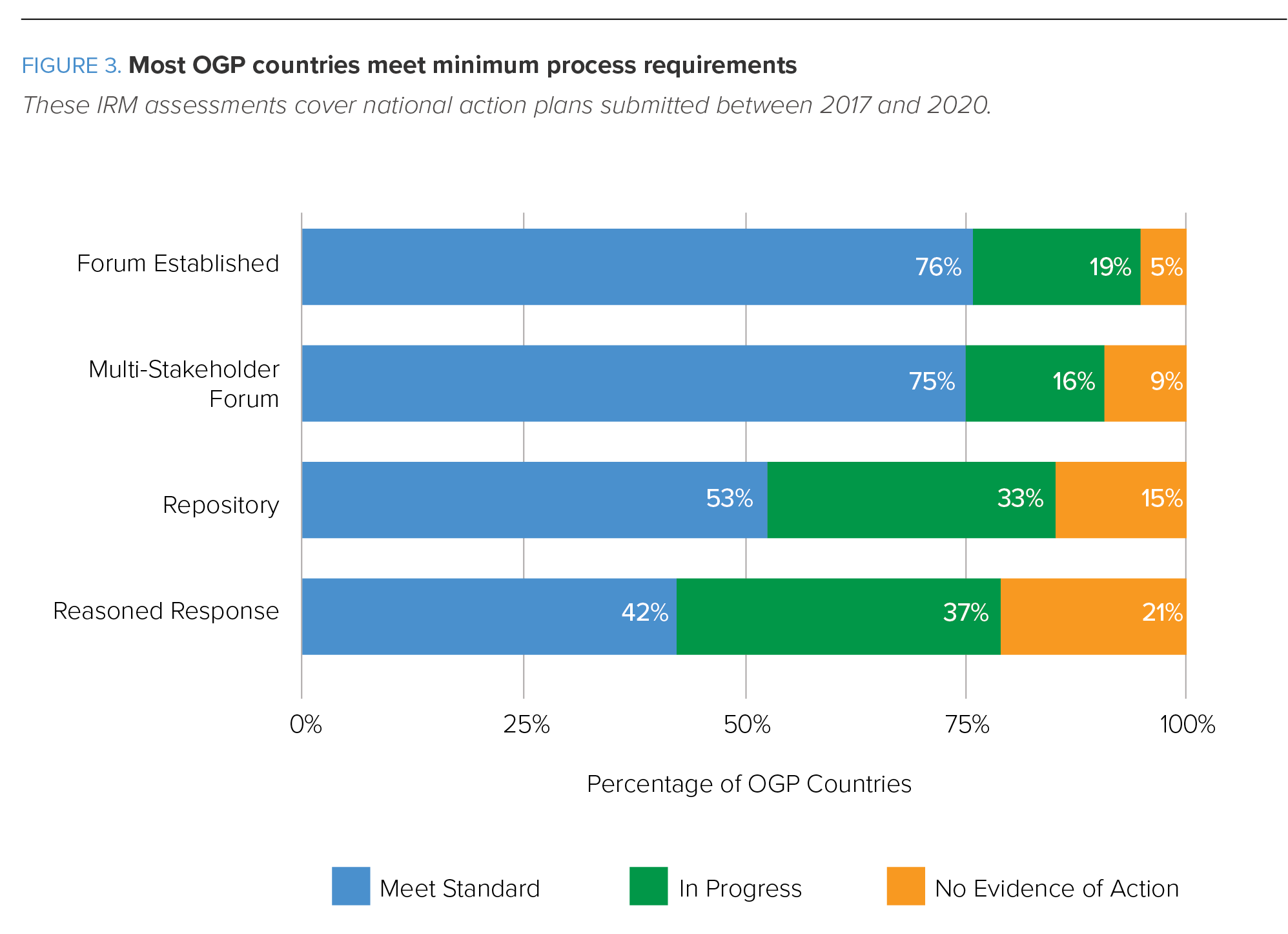 Institutional arrangements matter for OGP. This paper finds that a stable government office leading OGP is associated with stronger early results (i.e., changes in government practices during the action plan cycle). Moreover, an increasing number of OGP countries have such an arrangement.

Stable OGP institutions, in particular, are a predictor of results. Less turnover in the OGP lead office—the government agency coordinating OGP—is associated with more early results. Changes in government, on the other hand, are not.

OGP institutions are seeing less turnover. The OGP lead office has become more stable over time (see Figure 4). In the first several years of OGP, half of countries experienced a change in this office during the action plan cycle, compared to only about one in five in 2019. 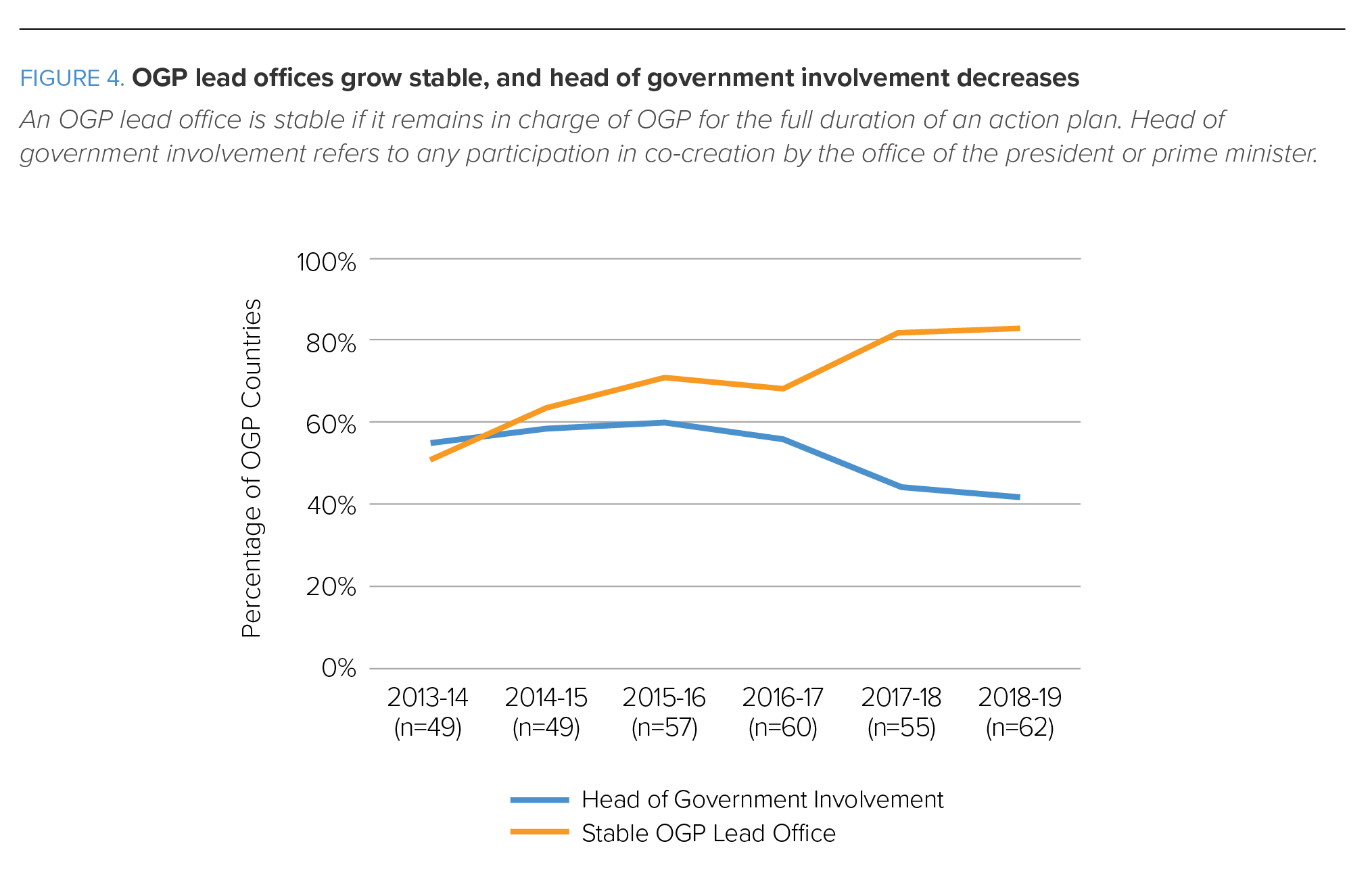 Fewer heads of government are involved in the co-creation process. Direct involvement by the head of government or their office at co-creation events and meetings peaked at 60% of countries in 2015–2016 but has since declined to about 40% (see Figure 4).

OGP is becoming more institutionalized. The lower head of government involvement does not imply that high-level political buy-in has declined. Instead, together with the growth in multi-stakeholder forums and stable OGP lead offices, it may suggest that OGP institutions are becoming more predictable and better able to weather political change.

Action plans tackle an increasing number of issues, but several challenges remain. In particular, levels of ambition, implementation, and early results have generally not improved.

National action plans have fewer commitments, in line with OGP guidance. The average number of commitments per plan dropped to 15 (the maximum recommended by the OGP Support Unit) for the first time in 2018 and has continued to decline since then.

Although action plans are becoming shorter, they cover a growing range of issues. The number of policy areas and sectors covered by the average action plan has more than doubled compared to the early days of OGP (see Figure 5). Commitments also increasingly involve civic participation, though fewer aim to strengthen mechanisms for public accountability. 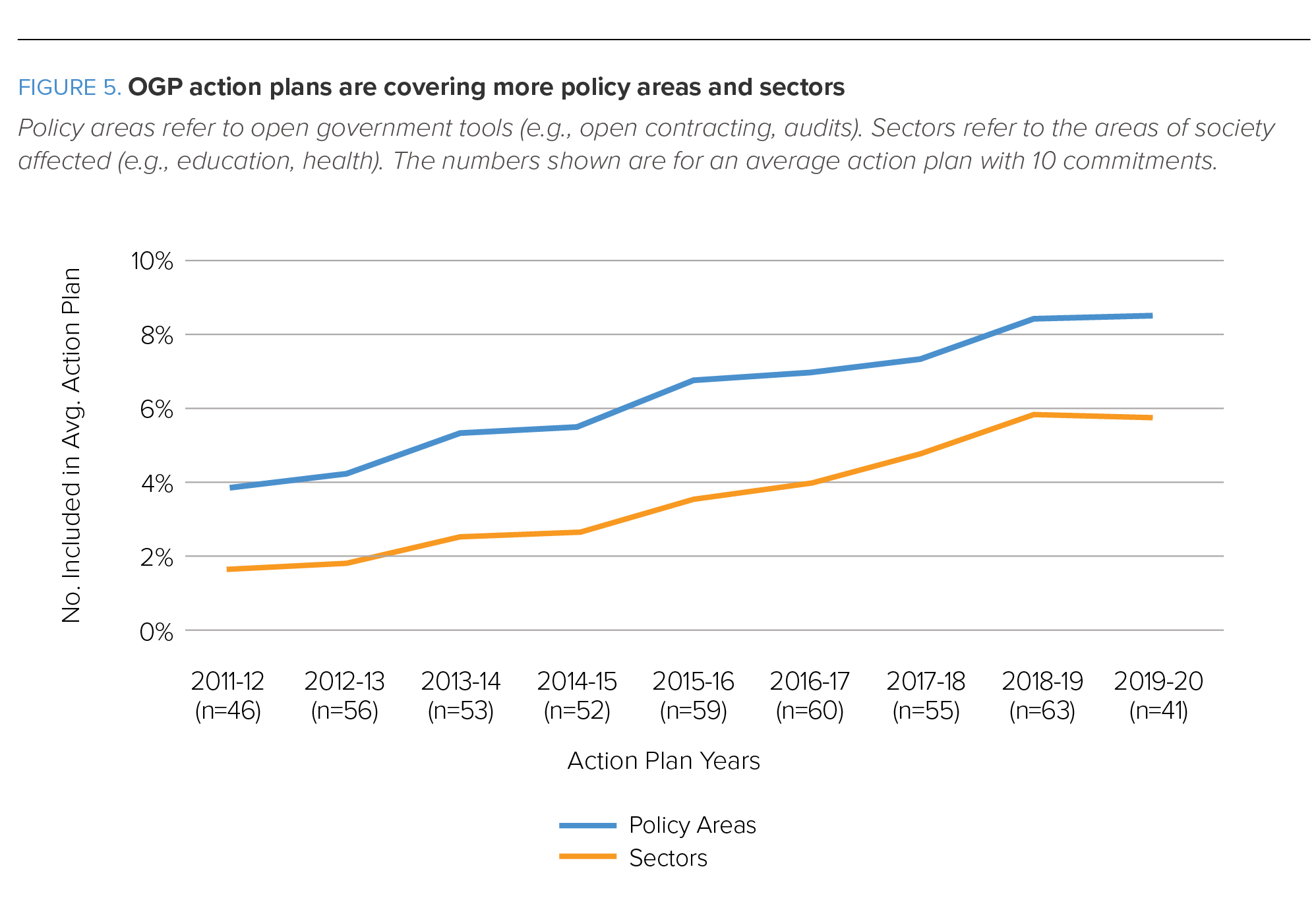 However, raising ambition remains a challenge. Rates of commitment verifiability (96%) and relevance (93%) are increasing, but the percentage of commitments that are potentially “transformative” (7%) remains low.

Action plan ambition has generally not improved over time. The percentage of ambitious commitments declined from 55% in 2014–2015 to just over 40% in the latest round of action plans, though this decline is not statistically significant.

Ambition nonetheless varies widely depending on the type of commitment. Commitments related to certain topics like public services and inclusion are generally less ambitious than commitments in other areas, such as anti-corruption.

Rates of early results remain steady, despite challenges in some countries

Overall, rates of implementation have not changed. Since the IRM began tracking these data, about two-thirds of all commitments are substantially or fully implemented by the end of the action plan period.

The rate of strong early results has also remained stable. Each year, about one-in-five commitments achieve significant changes to government practices. However, IRM assessments only consider changes during the action plan period, so this is a significant undercount of actual results, which often take several years to emerge.

Most OGP national and local members implement a majority of IRM key recommendations. The implementation rate varies depending on the member, but overall, it has stayed constant at about 50%. This rate suggests that the IRM is influencing OGP action plans and processes. 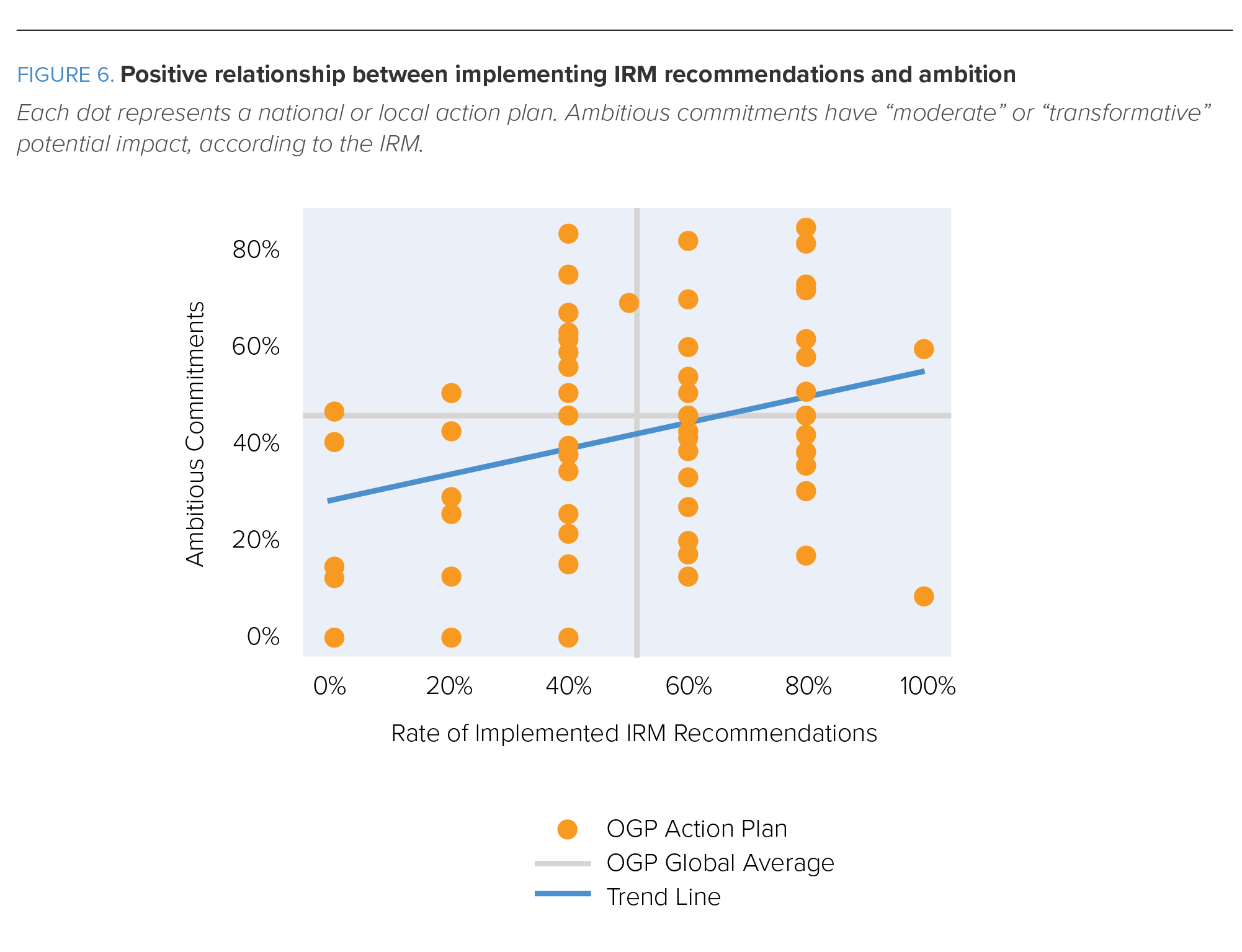 OGP anti-corruption commitments are strong. Commitments in several areas of anti-corruption are among the most ambitious and most likely to generate strong early results. These areas include whistleblowing, extractive industries, audits, and open contracting.

Action plans increasingly address a subset of anti-corruption reforms. The number of commitments related to beneficial ownership and open contracting, in particular, is significantly increasing (see Figure 7). However, many anti-corruption topics—such as whistleblowing and lobbying—still see few commitments, despite their effectiveness. 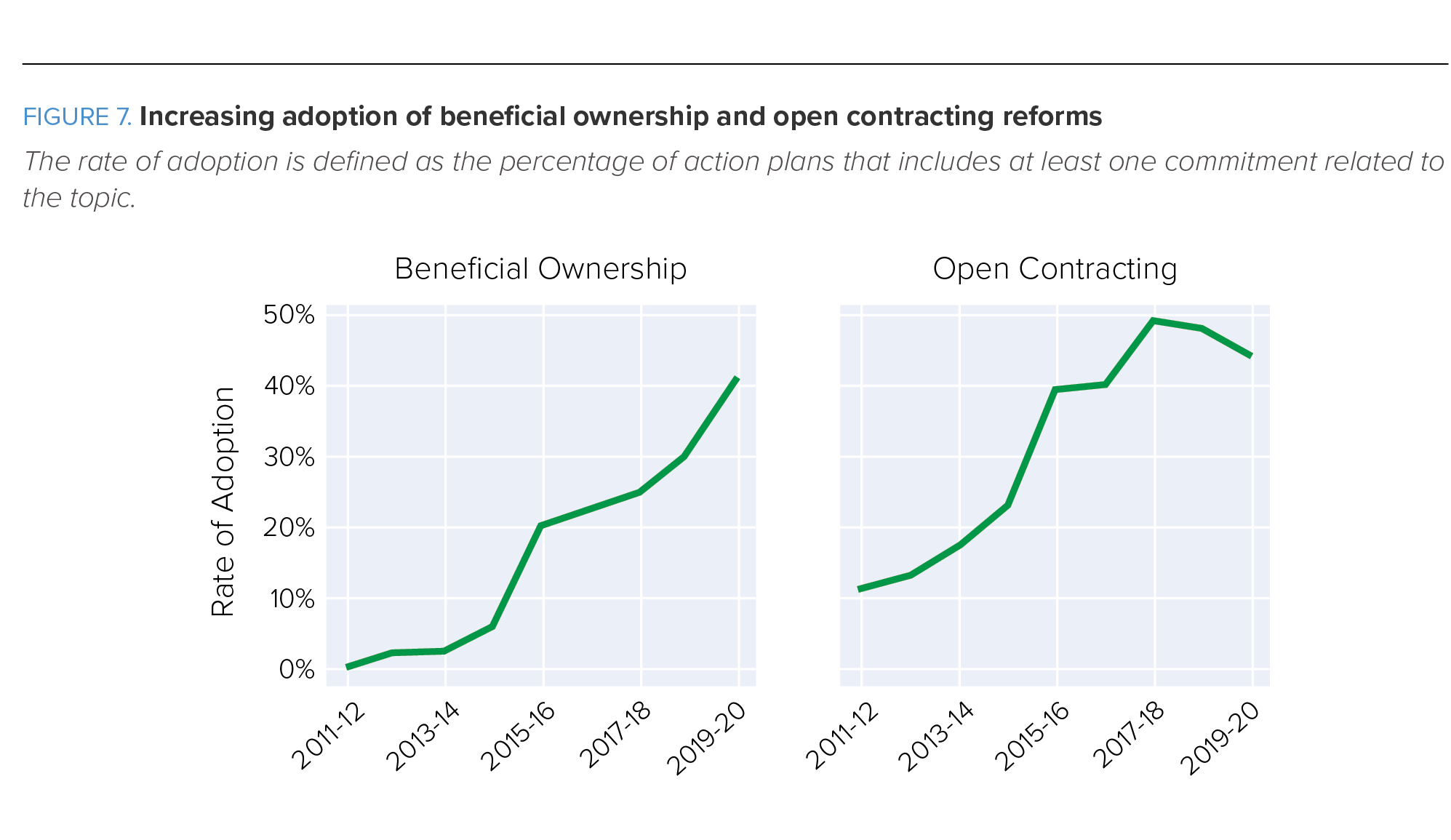 Civic space is declining in most OGP countries. Globally, civic space continues a long-standing decline, and OGP countries are not immune. For the first time, five OGP countries fail the OGP Values Check, which measures the degree to which civil society can operate freely without government repression or interference. The safety of journalists and activists, in particular, is worsening.

Advancing policy areas through OGP is associated with real-world changes

OGP commitments are associated with better performance in beneficial ownership transparency and open budgets. OGP countries that have made commitments in these areas—ambitious commitments across multiple action plans, especially—have become more open than other countries according to third-party assessments (see Figure 8). 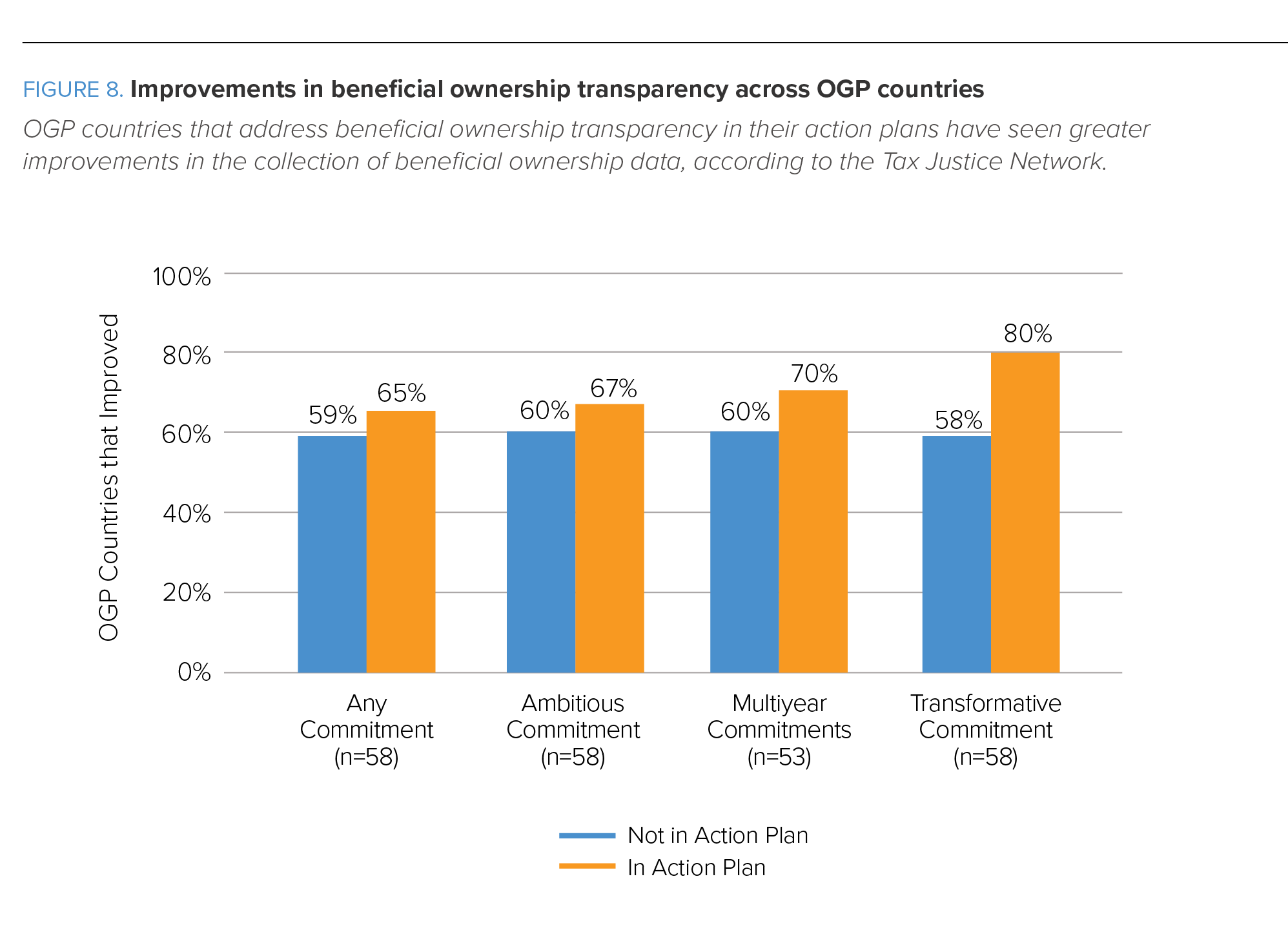 The research validates the OGP model of co-creation and domestically owned action plans. Collaboration between government and civil society is linked to more ambitious and implemented action plans, which are translating into measurable improvements in government openness. In sum, where the OGP process is strongest, OGP outcomes tend to be strongest. The implications of this finding and various others fall into five overarching areas of work: 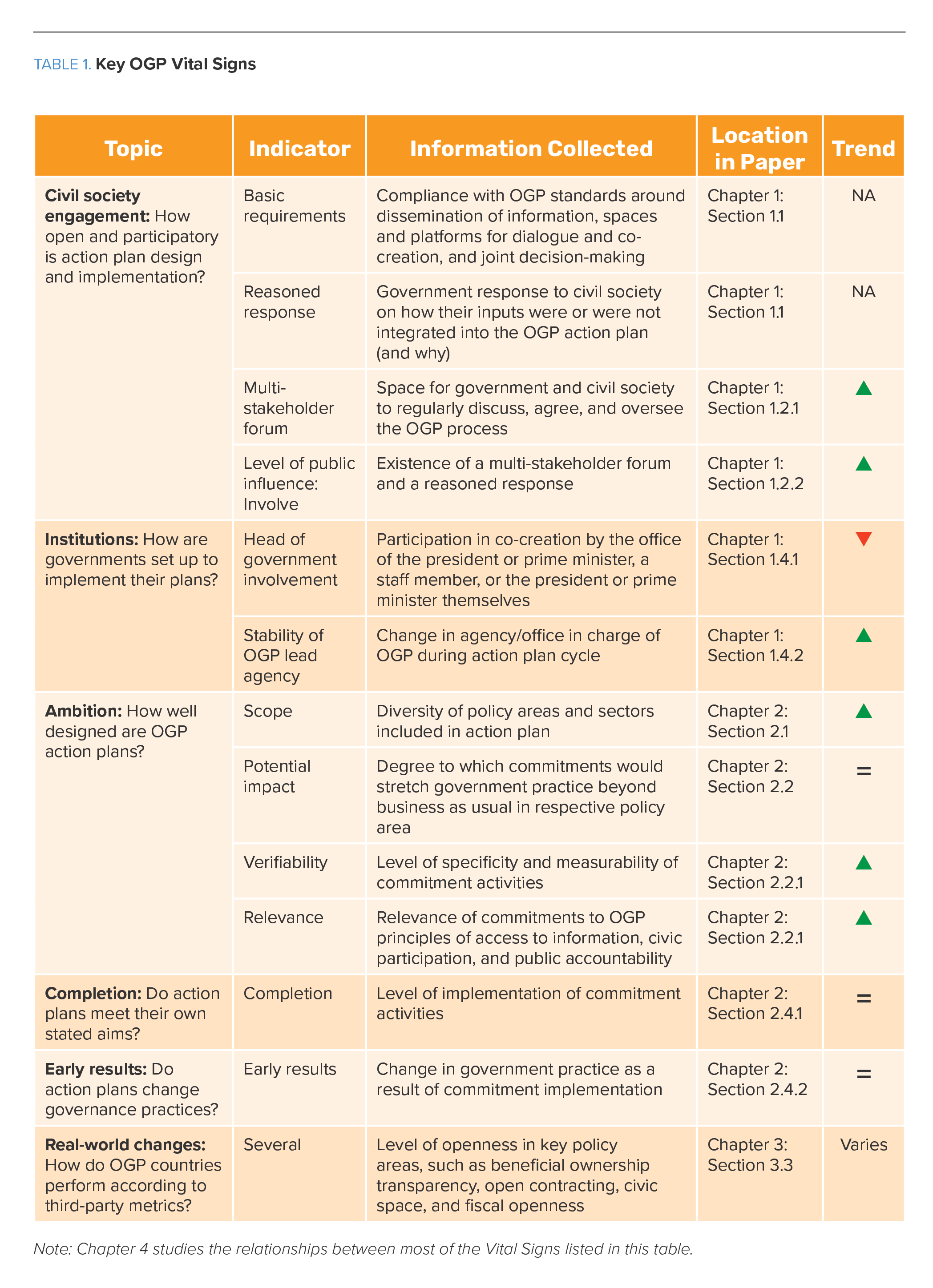 About the Vital Signs Paper

Every few years, the OGP Support Unit or the IRM reviews existing data to determine whether OGP is working as intended. This work was previously referred to as IRM Technical Papers and was later included as a chapter of the 2019 OGP Global Report. This quantitative analysis complements other more nuanced reviews of OGP, including an independent, multiyear evaluation in a handful of OGP countries.

This particular report is based on several core IRM metrics. The indicators that form the bulk of the analysis are listed in Table 1, along with simple indicators for recent trends. See the corresponding sections of the report, also listed in the table, for details. The data cover nearly 200 IRM-assessed national action plans submitted between 2012 and 2020. All data included in the paper are updated as of October 2021. The data, as well as many of the calculations and results, are publicly available online. See the Annex for details.

[1] We do not assess causality in this report. We determine statistical associations through multiple linear regression analysis. See Chapter 4, “Predicting Outcomes,” for details.