A new beginning in Pakistan 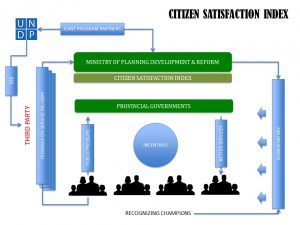 This blog is part of a series on public service delivery for open government.

The government of a middle-income country wanting to hold itself accountable? Possible. Wanting to base this accountability on hard numbers that tell us how 200 million citizens feel about local service delivery? Improbable. Wanting to gather and publish these numbers during an election year? Impossible. But as we told you last year in a blog post, the federal government in Pakistan wanted to do just that – and UNDP was there to help.

The Ministry of Planning Development and Reform has designed a citizens’ satisfaction survey in Pakistan to create a standardized feedback loop for governance and service delivery across the whole country. The survey will be undertaken periodically and the results will be compiled into a Citizen Satisfaction Index.

Although recently there have been changes in political leadership in Pakistan, it is expected that the new leadership will take similar ownership of this initiative. But reform is inherently political, and it’s about shifting political choices and negotiating new political settlements. Even in advanced democracies, these negotiations take place behind closed doors, far from the lives of the citizens at stake. Policies are made, laws are drafted, new institutions are erected, and budgets are finalized without any direct input from the very people they will directly affect. Data matters – but this is mostly ‘supply-side’ data – gathered by the government, from the government, for the government. Its veracity cannot be challenged because it can’t be seen.

Governments are rewarded or penalized for good or bad governance only after each election cycle. Therefore, from the government’s perspective, the measurement of levels of citizen satisfaction with public services is expected to be a critical tool for determining the outcomes and impact of government service delivery and reform efforts. The Citizen Satisfaction Index aims to identify areas and cities where these services are deficient and fall short of citizens’ satisfaction – while at the same time recognizing localities which are strong service-delivery performers. are governed well. The survey is aimed at generating evidence from the users of government services on how they perceive the quality of services rendered, and provide quantitative benchmarks from which further improvement can be tracked. The services covered in this exercise include health, education, public transport, roads, water & sanitation, police and national registration. This survey thus provides a basis for assessing the quality of these services provided by government and generates critical feedback to relevant government agencies/departments for their own improvement. 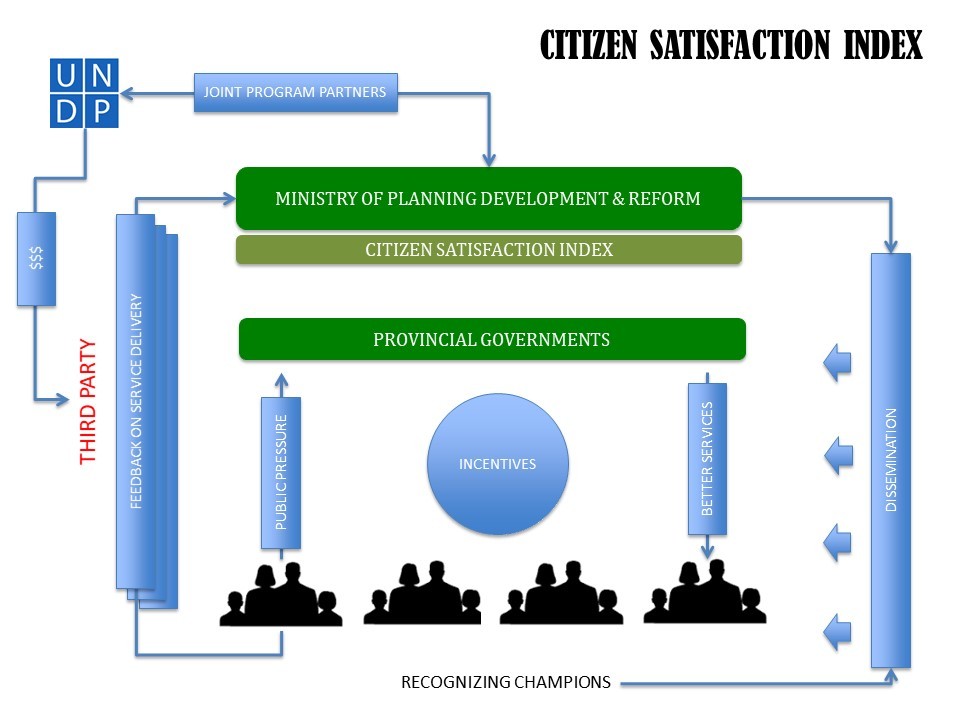 Given the political significance, the Ministry of Planning Development and Reform has emphasized openness and inclusion in shaping the Index. In political terms, how the Index is constructed will perhaps become more important than what it eventually measures. With this understanding, the Ministry has led a series of consultations around the country – not only in urban centers like Lahore and Karachi, but also remote regions such as Gilgit-Baltistan in the extreme North to gain inputs from a diverse range of stakeholders on reform priorities. Dozens of political leaders, sector experts, local service-delivery managers and statisticians shared their views on a governance reform agenda for Pakistan. In Muzaffarabad, located in the extreme north-east, participants emphasized services such as law enforcement, land revenue administration and education as crucial, and even prioritized certain service-delivery transactions e.g. getting a First Information Report or FIR registered by the police is the first step in initiating a criminal investigation, which complainants commonly find difficult. In Karachi, the southern port and provincial capital, key stakeholders named health and education as top priorities.

To include ordinary citizens in the conversation, nine focus groups were conducted in urban and rural areas across Pakistan, which formed the basis to identify the public goods and services, which were most important to households. The government is now proceeding with the technical process of formulating the Index, figuring out the theoretical framework, tools for multivariate analysis, normalization of data, assignment of weights and aggregation, choices for sensitivity analysis and visualization. The input received from consultative workshops, combined with the data emerging from focus groups with ordinary citizens, is being used to narrow down the thematic scope of the Index. So far, this scope tentatively includes broad service delivery areas including health, education, water & sanitation, police, transport and roads. This technical work is being carried out in close consultation with the most relevant government department – the Pakistan Bureau of Statistics, to ensure it has buy-in.

For Pakistan, the most innovative aspect of the Citizens’ Satisfaction Index initiative is not its value as a tool for informing policy – though that is significant, and we have explained that in the previous entry – it is as a tool for democratizing decision-making in government. Including the people of Pakistan  in the construction of the Index is of paramount importance to ensure that no one is left behind in the country’s pursue of the Sustainable Development Goals. The citizens’ demands, grievances and expectations of their elected government will finally be part of the political calculus. This makes true reform possible.

Read the rest of the Public Service Delivery Asia Series: