Building a Democratic Process in Our University – Tunisia 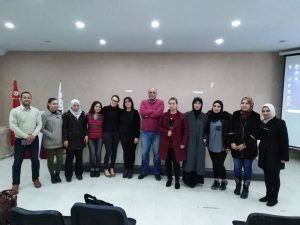 Academia could be considered the link between society and policy makers, as scholars diagnose, analyze, and make recommendations for public policy. The academic world offers space to discover the truth underlying sociological and political forces and ideological dogma. More than that, universities prepare and train citizens for public life.

The Tunisian Revolution of early 2011 there was a push for universities to prepare students for public life in a participatory democracy. As a Ph.D. candidate and Adjunct Professor of Law and Political Science at the University of Tunis El Manar, I sensed an urgent need to renew our country’s approach to education by rethinking the role of academic institutions. After learning about the Open Government Partnership (OGP) through a friend, Asma Cherifi, I thought that the principles of open government gave me an entry point for charting a new direction for the university.

Tunisia faced many difficulties in setting open government priorities. Asma, a member of the TACID Network, a civil society organization active in the OGP dialogue in the country, told me that the participation of academics in open government discussions would help with consolidating ideas. We decided to collaborate to raise awareness of and build a course on open government at the University of El Manar, and to strengthen the role of academia in the open government movement.

The first challenge was defining the target audience. We chose to house the program within the doctoral program at the Faculty of Law and Political Science, because of the capacity of Ph.D. students to absorb open government principles and because they represent a broad swath of state and civil society actors. The idea was to emphasize transparency and integrity as pillars in public administration, and lay the foundation for the university to adopt these new curricula.

The second challenge was finding local and foreign professors who could provide instruction on this topic, which is novel to many in our country. A partnership was established between the Electronic Management Unit at the Ministry of Public Service and Modernization of Administration and Public Policies, civil society representatives, and the OGP Multi Donor Trust Fund (MDTF) managed by the World Bank. Following a close collaboration, we launched the Open Government Training Course.

Exposure Leads to a Changing Mindset

The initial reactions to the course from students and faculty underscored the complexity of introducing a new topic. In addition to a new subject, the course involved a new teaching method based on brainstorming and analysis. The University     of Tunis El Manar is the first in Tunisia to introduce these principles in this way, and this initiative has changed the view of those within the university about      its role in participating in the formulation of public policies. As Mounir Eleuch, a Ph.D. student and member of the OGP Club, stated, “The Open Government course will strengthen the role of the university in carrying out its mission.”

Indeed, part of the value of this effort will come from students’ policy papers on subjects directly related to the principles of open government and public policy. Students have also recognized that it will be difficult to modify a style of management within the school that has been stable for decades. This discourse and these realizations on campus are undeniably a key first step to creating a scientific laboratory around a transparent, participatory and accountable public policy process.

For their part, the faculty was surprised by the value of the open government principles and the new pedagogical tools. At the onset, convincing the professors to participate was a significant challenge, as they perceived open government as a foreign topic. The support of a number of professors and in particular the Dean of the Faculty of Law and Political Science, Sami Bostanji, was essential. Dean Bostanji said, “Awareness and openness of the university to its surroundings

are the essence of establishing a new vision for its role in consolidating participatory democracy.” Equally supportive, the Head of the Political Science Department Asma Nouira emphasized, “Teaching the principles of open government is an innovative way for the university to play a new role in the social and political environment.”

In addition, the Director of the Ph.D. Program explained that the principles of open government can be adopted in the administration of the school. Doctoral students not enrolled in the course were also asked to prepare a policy paper on the subject of applying open government principles in the school to help it overcome management challenges.

More Than a Training Course

The central actors in the program hold a shared belief in the importance of elevating the role of the university in the formulation of public policies, in participating in the OGP dialogue in the country, and in creating convergence between academia and policy makers in Tunisia. Their openness to the participation of professors from foreign universities, relevant civil society organizations, and especially the government representatives, created space and an enabling environment to work together to determine the general needs of the country.

The impact of the program has reached beyond implementation of the course. There is growing support for establishing a public policy laboratory that will incorporate the participation of students and professors to diagnose, analyze, and provide recommendations and scientific proposals to inform policy making in public institutions – this truly captures our goal of rethinking the role of the university in the formulation of public policies. 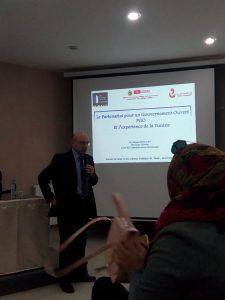 In order to further expand this effort, we are offering “Principles of Open Government” as a main course for the master’s level program beginning in the 2019/2020 academic year. Later we will introduce it as principal learning material in the university’s Public Law Division.

To build a broader community around this effort, I established an Open Government Club in the Faculty of Law and Political Science, and I am preparing to launch similar clubs in three other faculties: the Faculty of Sciences, Faculty of Technologies, and Faculty of Humanities and Social Sciences. Through these clubs, I seek to build a core group of supporters to constructively encourage the faculties to adopt open government principles in their curricula and to integrate them in their management approach in a more systematic way.

As we broaden our network and strengthen our tools, methods and narrative, we aim to generate wider acceptance of transparency, participation and accountability as key enablers in policy making. As Najwa Bezzine, a Ph.D. student who leads the University’s OGP Club expressed, “This is an opportunity to reshape the role of the university in its mission as a social elevator, and to contribute to empowering students with a new vision and a new tool for participatory democracy.” In the future, we hope that the academic world will be able to empower community members with new tools for informed decision making.