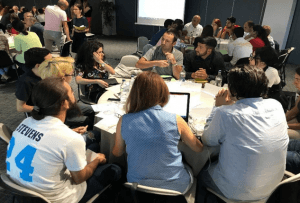 “When will it finally be our turn to use water? I’ve seen my neighbor water his crops ten times by now, but the water distribution hasn’t reached us even once this month! I cannot understand this water register at all,” loudly complained Grigor, an elderly farmer.

“Do we have to wait for the water register in this century? Perhaps a mobile app could help to solve this problem,” replied Hayk, Grigor’s grandson.

True innovation starts from the ground up.

This story isn’t a hypothetical, but a real problem for every farmer in Armenia. Ongoing conflicts over water use in the agriculturally important Ararat valley affect the day-to-day lives and livelihood of farmers like Grigor. A reliable water supply can significantly improve quality of life for citizens in the area, and is a pre condition for socio-economic development.

Finding bottom-up solutions is one approach employed by the Armavir Development Centre (ADC), a community-driven organization committed to user-centric approaches to local problems. The ADC, where I work, used this approach to deliver results in the ”Support to Participation and Co-creation of the Open Government Partnership (OGP) Action Plan in Armenia” project, funded by the OGP Multi-Donor Trust Fund (MDTF).

When the OGP MDTF announced the availability of funding to support civil society organizations leading an innovative 2018-2020 OGP Action Plan design process, the ADC submitted a proposal for a crowdsourcing approach. We decided to employ crowdsourcing to be able to reach out directly to users, bypassing mediators, to expand the dialogue between civil society and the government. Crowdsourcing engages not only institutions but also individual citizens in the design of citizen-centric policies, by gaining insights directly from them.

With assistance from UNDP Armenia’s Kolba Innovation Lab, we experimented with crowdsourcing and direct citizen engagement in the process of Action Plan design. For the first time, citizens contributed to the content of the reform agenda, rather than just voting for the final version. We applied this approach to sensitize citizens to the importance of engaging with the government, and to gain grassroots insights into challenges on the ground and possible solutions.

In order to raise awareness of open government topics and to create a space for citizens to submit their ideas, we carried out public engagement meetings in all ten regions in Armenia. Participants included representatives of the non-profit sector, CSOs and engaged locals, and a government team. The meetings familiarized participants with the OGP agenda in Armenia and opportunities for contributing by submitting citizen suggestions. There was an active discussion at each meeting, which contributed to a new quality of dialogue between citizens and the government. The participatory approach enabled the crowd to submit forty-seven proposals related to issues ranging from citizens’ access to public administration, public service delivery, effective management of public resources, and others.

While crowdsourcing created a first level of engagement, it wasn’t sufficient to find technical solutions. This is why a combination of “wide and wise” crowdsourcing techniques were used. The next step was to involve technical ministries.

The ADC approached a number of ministries to float ideas among public servants. The interest from public agencies exceeded our expectations. Instead of the planned five agencies, the ADC conducted outreach and consultations with twelve state institutions, and received forty-two proposals from public administration bodies. The wave of wider crowdsourcing revealed institutional challenges to public service delivery.

Sharing Views with Each Other: The Town Hall Format

To crowdsource wisely, the ADC held Town Hall meetings to collect feedback from target groups in a structured and content-based event format. The philosophy behind this is that users are not passive beneficiaries of government services , but experts in their own social challenges. By engaging targeted user groups, Town Halls helped to validate the ideas that had been collected thus far. Town Hall meetings were organized with 218 participants from ten different regions and the capital, Yerevan. The diverse group of participants included local residents, people with disabilities, members of ethnic minorities, CSOs, and SMEs. On the government side, there were representatives from local self-government bodies, the national government, and the Ministry of Health, Ministry of Territorial Administration and Development, Ministry of Education and Science, and State Cadastre Committee.

In preparation for the meetings, we chose four ideas for Action Plan commitments that had come out of the crowdsourcing process. Then we designed scenarios and trained facilitators and note-takers to lead discussions in seven break-out groups of ten people each. The collected feedback was analysed by a Town Hall expert, who produced a short report. This served as the basis for proposing five Action Plan commitments that seemed to have the most impact on people’s daily lives: (a) local government accountability; (b) water resource management; (c) healthcare; (d) transparent e-admission to educational institutions; and (e) land resources. With the Town Halls we managed to create an ongoing mechanism for collecting community feedback on the Action Plan.

Collecting ideas at the Hackathon in Yerevan.

Once the proposed ideas we re validated by expert user groups, we reached out to hackers and coders to invest their professional skills into developing specific solutions that could support Action Plan implementation. The ADC jointly with an NGO called the Public Journalism Club, the Transparency International Anticorruption Centre, and the Innovative Solutions and Technologies Centre launched a new initiative, the Open Government Data Hackathon. This was a competition for innovative ideas and programming to find high-tech solutions to support OGP commitments on health, water and land resources management. Within twenty-four hours, twenty-two Hackathon teams developed innovative solutions aimed at more open, transparent, and accountable practices within the Government of Armenia.

At the ADC, we were inspired to take this approach and wanted to bring together youth, experts, user groups and government in one platform, where they could become more aware of other perspectives and work together to solve problems. After two days of competition, winning ideas were selected by independent judges from the IT sector, universities, and the broader private sector. However, as a civil society representative the ADC also had a say about the relevance of the ideas, and Government representatives had a role in validating ideas and committing to use them. As a result, we had winning ideas in the areas of health, water, and land ownership records that came to address the gaps identified in the Town Hall meetings .

Hayk, mentioned at the beginning of this story, witnesses every day how his grandfather wakes up at 4 o’clock in the morning to water his crops. He applied to participate in the Hackathon to co-design a solution that would have a real influence on his family’s well-being. He was one of the Agro Tech team members at the Hackathon who won a $4,000 prize for creating a prototype of an electronic mechanism that will improve the water register and thus help the Ministry of Agriculture and every citizen to use water resources more effectively. Adopting this IT solution, which emerged from the crowdsourcing process, became the fifth commitment of Armenia’s Fourth OGP Action Plan .