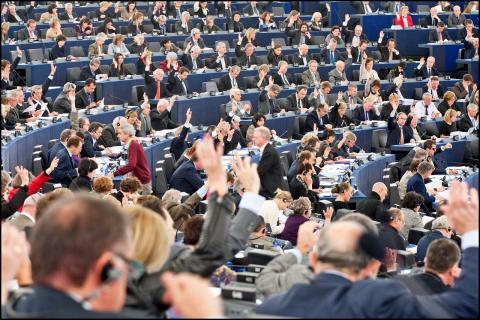 This article originally appeared on Access Info Europe and has been republished with permission from the author.

Access Info Europe has welcomed the decision[1] by the European Parliament to bring greater transparency to its decision making by recording and publishing records of final voting in committee. Previously most committee votes were taken by a simple show of hands and were not recorded.

The decision, adopted on 26 February 2014, applies to all final votes on resolutions and legislation. It also makes it compulsory to record and publish the final votes by MEPs in plenary on non-binding resolutions.

“This decision will make it easier for citizens to hold MEPs to account, and to for civil society to track the influence of lobbyists at the committee stage, which is often where decision making actually takes place” said Pam Bartlett Quintanilla, Campaigner with Access Info Europe.

Access Info Europe notes that this decision is in line with the EU Treaties which require the European Parliament to “meet in public … when considering and voting on a draft legislative act.” [2]

Access Info Europe regrets that there other areas of the legislative process remain opaque. The European Parliament missed the opportunity to extend mandatory transparency to voting on amendments.

Another crucial area of law-making which escapes the reach of transparency is that of what are known as “trialogue” negotiations which take place between the Parliament, Council of the EU, and the European Commission. These are informal meetings held with a view to reaching an agreement in the early stages of developing legislation. No record of the discussions is made available to the public.

Law-making [is an] activity that in a democratic society can only occur through the use of a procedure that is public in nature and, in that sense, ‘transparent’. Otherwise, it would not be possible to ascribe to ‘law’ the virtue of being the expression of the will of those that must obey it, which is the very foundation of its legitimacy as an indisputable edict.

[1] The changes take effect from the start of the March 2014 plenary session.