From hackathons to social media, open government is transforming the way that Mayor Bloomberg’s administration and New York City government serve the public. And there has been no greater testament to open government’s potential than the strategy and innovation in action during Hurricane Sandy. Learning from our experience during Hurricane Irene, in the days leading up to Hurricane Sandy’s landfall in New York City, government technologists reached out to the data science community to share recently updated hurricane evacuation zone maps based on up-to-the-minute flooding projections. To ensure wide  public access to this valuable information, the City’s IT Department immediately published the data to the City’s Open Data portal, enabling developers and designers to develop emergency maps and applications. For the second consecutive year, the City also partnered with organizations such as WNYC.org, The New York Times, and Google’s Crisis Response team, which developed a customized New York City-centric Hurricane Sandy map featuring evacuation zones, shelters, food distributions centers, warming centers, recovery centers and more resources. 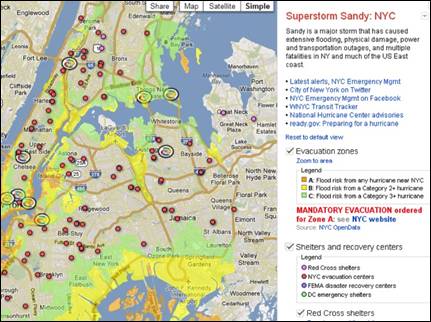 The result? We estimate that collectively we served and informed 10 times as many individuals by embracing an open strategy. That’s hundreds of thousands of people. And it validates the Bloomberg administration’s commitment to this technology. On the public communications front, the City embraced social media to increase transparency and access to information, with significant results. Twitter emerged as a primary source of real-time information as Mayor Bloomberg urged New Yorkers to follow the @nycmayorsoffice channel during his online live video streams and television broadcasts. Our partners at Twitter also showed incredible support for the emergency response effort by donating thousands of dollars worth of promoted tweets, helping @nycmayorsoffice reach over a million more individuals and nearly doubling its follower count over several days. 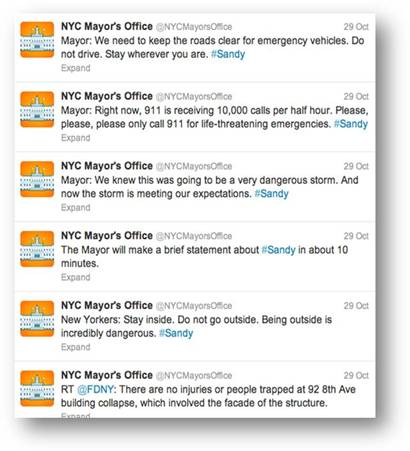 Facebook and Tumblr also played crucial roles as the City quickly distilled informative, detailed press releases into compact, social media-ready formats. We reached a peak audience of 322,000 on Facebook, and saw dramatic increases in engagement. On YouTube, the public viewed videos over one million times, and across all social media channels, more than 200,000 new people followed the City of New York. 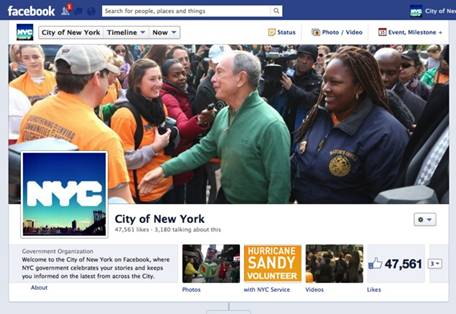 On all channels, the City engaged in two-way communication, responding to questions, clarifying statements, and listening to the public in order to more efficiently allocate resources. The City sent over 2,000 tweets and responded to nearly 300 questions. For the first time, we also communicated with Spanish-speaking New Yorkers via the dedicated Spanish language @nycgob. 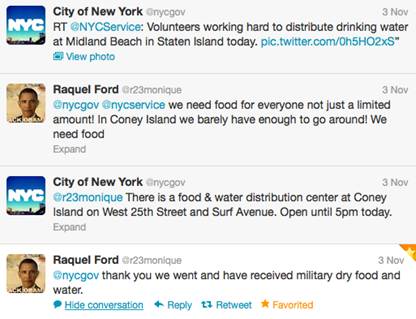 Finally, it’s notable that many of the City employees who worked day and night to publish data and communicate with the public were themselves significantly impacted by the storm, and enduring loss of power and heat. It’s a great testament to their resolve and commitment to service. In sum, for many who did not have access to a television, or high-speed internet connectivity, mobile access to lightweight social media feeds proved crucial during Hurricane Sandy. Of course, safety and security are always the number one priority, and concerns about health, heat, connectivity and power took precedence during the storm. But research also shown that constant, responsive communication in an emergency can have enormous positive psychological and emotional benefits to the public, and prevent health concerns caused by stress and anxiety. Thanks to open data measures and social media communication, New Yorkers reported that they felt connected, informed, and saw firsthand that government workers were listening to their needs.

Open government initiatives continue to play a vital role in recovery efforts, and we are grateful to the many New Yorkers and technology partners who contributed their time and expertise to help better serve our city in its time of need.