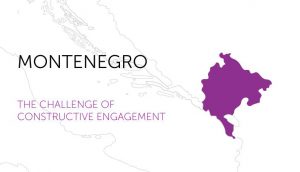 ‘We have learned that it is very difficult to raise awareness of the importance of participation and to engage citizens constructively in government policy-making processes,’ says Sladjana Pavlovic of the Ministry of Finance and General Secretary of the Operational Team for the OGP.

The OGP process in Montenegro has highlighted the lack of sufficient knowledge of OG concepts and principles within society: of openness, transparency and participation. ‘Openness is not the dominant concept. We’ve been so used to a closed system; citizens don’t demand anything because they don’t know these values and they don’t recognise them as being important,’ says Milica Kovacevic of the Centre for Democratic Transition (CDT) and a member of the OGP Operational Team.

Montenegro joined the OGP in September 2011, following the participation of the former Prime Minister, Igor Luksic, in the inaugural meeting in New York. It was an opportunity for government to intensify its cooperation with civil society and to further the aspirations of transparency. ‘The initiative gives us a significant incentive to implement the concept of good government and for Montenegro to become part of the global network exchanging knowledge and experience,’ adds Sladjana. For civil society, the opportunity for government to gain a better image internationally and for NGO participation to lend greater legitimacy to these processes provided further motivation to join.

The government elected to implement the entire process of developing the Action Plan in cooperation with the US Embassy in Montenegro. In December, the Embassy invited seven NGOs working in the areas of democratisation, rule of law, human rights, transparency and civic education to the first meeting about the OGP. For government, this was a way of ensuring that the selection process was objective. ‘Civil society is quite divided in Montenegro and government was probably afraid of getting criticised for inviting the wrong NGOs,’ Milica recalls. Of the seven, four organisations indicated their interest in participating and became members of the Operations Team. Government thereafter invited inputs, suggestions and ideas from civil society for the Action Plan by posting notifications on the e-government, government and Ministry of Finance portals. ‘Nobody responded except the four NGOs that were on the Operations Team,’ Sladjana recalls.

With the tight timelines, it is clear the process was rushed and the principles of broad, national consultation were bypassed. According to Milica, at the time the OGP website carried little information and there was nothing to really guide the action-planning process. ‘In March, we received the draft Action Plan and gave our comments. We wanted it to be more ambitious and feel it was more declarative with wishes and promises. It didn’t say who was going to do what and when.’ While some commitments were corrected to fulfil the OGP criteria, ultimately they all fell into one of three categories: actions that government is already implementing; those that don’t demand additional financing; and projects that can be funded with the support of international donors.

The lack of deadlines in many instances has posed challenges during implementation. ‘We realise 50% were continuous activities, so there were no benchmarks and we didn’t know how to measure them,’ Sladjana reflects. Commitments such as the e-Register of business licences, the e-Petitions, and the visualisation of the budget are some of the initiatives that have been accomplished to date. Those that are outstanding will be reformed and included in the next Action Plan. Of late, other concerns and risks have emerged. OGP was orphaned during the political transition. With a new prime minister in office since December 2012, civil society worries about the lack of political will and leadership as government struggles with many other more important obligations and priorities – the EU negotiations and the NATO summit to name but a few.

According to Marija Novkovic of UNDP, this government’s priority is the economy and reducing the budget deficit. ‘Less attention will be paid to the OGP unless we can argue that open data can lead to increased savings and more efficient services.’ UNDP has been providing support to the government of Montenegro in meeting some of its OGP commitments. Should the momentum achieved in facilitating citizen participation in policy-making and opening up data on budget expenditure be sustained, this could fuel more vigorous open government efforts.

Learning from the experiences of Croatia, civil society in Montenegro has strongly expressed its wish that the consultation process be broadened to include many more NGOs and the public. There is now a much better understanding of the rules and principles of the OGP. ‘This time, we want to be completely open and more transparent about the process. All task-force meetings will be announced and the media will be invited to attend,’ says Milica. And from the government’s perspective, the challenge remains how to tap into the wide range of instruments to communicate with civil society, which is itself a rich source of very constructive ideas. ‘We want to show that government is keen to listen and is open to new ideas and opinions. It is important for citizens to engage constructively, not just criticize us,’ Sladjana pleads.