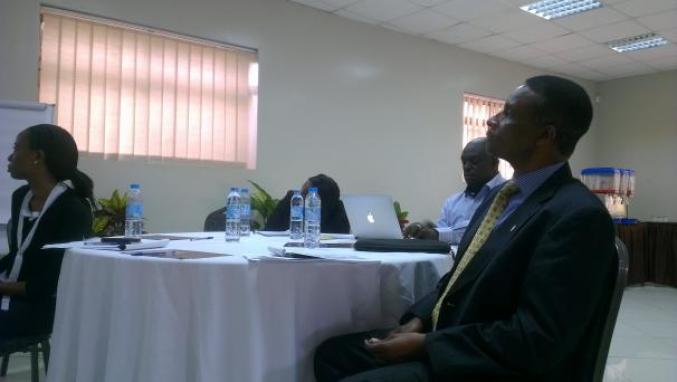 On Wednesday 13 March 2013 in Kampala, Development Research and Training (DRT) in collaboration with Development Initiatives – Africa Hub organized an Africacounts Roundtable Forum on Open Development. The ‘Africacounts’ round tables are multi-stakeholder forums designed to stimulate constructive dialogue amongst civil society, media, government and academia. The purpose is to influence the allocation of resources and ensure poverty eradication is prioritised in the East Africa region. Africacounts Round Table Forums held in 2012 in Nairobi, Kenya covered a range of themes such as the prospects of East Africa’s natural resource finds, the state of Social Protection in the region and progress on the Kenya Open Data Initiative.

At the Kampala event which was attended by an array of delegates from civil society, academia, government and the donor community, delegates agreed that Uganda needs an open data initiative to help spur decisions on resource allocation for poverty eradication. An open data platform, it was agreed, would help stimulate public demand for more openness and information sharing in Uganda.

Under the theme “Appropriating Open Data for improving resource allocation and service delivery in Uganda”, key objectives for this meeting included; Exploring avenues through which open data can be leveraged to influence resource allocation and effective delivery of public goods in Uganda, considering the potential challenges to the operationalisation of an open development platform in Uganda and the possible means of dealing with them, and to argue the case for the inclusion of ‘open data’ as a stand-alone goal in the post MDG agenda.

One of the panelists, Dr Abel Rwendeire, deputy chairperson of the National Planning Authority said that an Open Data initiative in Uganda was long overdue:

“As a government, we have not been forthcoming in sharing information despite the laws we have in place that create an enabling environment. Irrespective of the sensitivities that come with making information public, we need to move faster”, he said

Dr Rwendeire further reiterated that Uganda, being an economy dependant on agriculture lacks coherent data on the sector to help better planning and investment. “At NPA we do planning based almost exclusively on estimates which is not always a good idea. For example the use of mobile phones would relay us good information even from remote villages. We should exploit modern and widely available communication tools”, he said

Al Kags, a Nairobi based Open Data advocate who was the event’s Key note speaker said Uganda should adopt a utilitarian approach where making critical decisions without necessary waiting for government is key in having an Open Data initiative. Citing as example Kenya which, unlike Uganda has no freedom of information law but has a running Open Data initiative, he counseled that there is need to begin publishing data after which government will eventually come along

Margret Kakande, the director of Budget Monitoring and accountability unit of the Ministry of finance said that the Open Data initiative idea is a powerful tool in making citizens aware of what is going on. “People can’t demand when they don’t know”, she said. She added that while the ministry publishes quarterly financial releases to local governments and government ministries and agencies, this does no good since many people can’t read or those who can either can’t afford to buy a newspaper or find time to read the extremely minute text the figures are presented in.

Ms Kakande added that since resource allocation is a political process in Uganda, Open Data advocates will need significant buy-in from politicians

Fred Byamugisha, the manager of E-governance at the National IT Authority (NITA) added that simply providing data which is not understood won’t do much. NITA, under the ministry of ICT has embarked on cleaning up all ministry websites to make sure that all the scattered information is put together and synthesized into understandable and easy to use formats, he emphasized

Edward Ssenyange from the Democratic Governance Facility (DGF) expressed his organization’s support for the Open Data platform, but cautioned that data should be handled professionally ensuring that all stakeholders in the process are playing their roles and that the ultimate aim of the project, that of ensuring that citizens are involved in the affairs of their governance, is never forgotten

The roundtable discussion, which was in form of a breakfast meeting, was intended to further the discussion that was started by DRT with the creation of the Open Development Platform. It ended with participants agreeing that to have a fully functioning Open Data Platform, an ecosystem of a variety of actors and stakeholders need to be in place, with all complementing each other. They also pledged to continue deliberating on the importance of the issue, and to spread the message to their organizations and their partners.