2016 came to an impressive close for OGP with the 4th Open Government PartnershipThe Open Government Partnership (OGP) is a multi-stakeholder initiative focused on improving government transparency, ensuring opportunities for citizen participation in public matters, and strengthen... More Global Summit in Paris from December 7-9, which attracted significant interest from media around the world. Set to a backdrop of concerning geopolitical developments in numerous countries (OGP and other), including the rise of movements rooted in stringent nationalism and closed societies, the Summit established OGP as a source of hope for democracy and society at large.

French President François Hollande opened the Summit by addressing the political climate and stressing the importance of OGP values such as transparencyAccording to OGP’s Articles of Governance, transparency occurs when “government-held information (including on activities and decisions) is open, comprehensive, timely, freely available to the pub... More and openness:

We must not defend democracy as if it were attacked, and barricade ourselves behind our institutions. We must do the opposite: we must open ourselves, we must be transparent, we must show that we welcome all initiatives, that administrations and States have nothing to fear from citizens, and citizens have everything to hope from States as long as they respect them.

While open government alone can’t fix the world’s problems, they can’t be solved without it . . . We are on the frontlines of governance reform. We have the power to make change happen in our communities, cities and countries. We need to use this power to help create more open, inclusive and responsive governments and societies.

The potential of open government and OGP to cultivate new and stronger relationships between citizens and governments, thereby rebuilding trust and improving the lives of citizens, continued to be a central theme of the Summit. Other speakers during the opening plenary session at the Salle Pleyel theater included thirteen Heads of State and Ministers, among them US President Barack Obama and Prime Minister of Canada Justin Trudeau (both of whom sent video greetings), President of Estonia Kirsti Kaljulaid, President of Uruguay Tabaré Vásquez, Finance Minister of Pakistan Ishaq Dar, and the Prime Minister of Côte d’Ivoire, Daniel Kablan Duncan, as well as a number of renowned civil society, including Aruna Roy, Marina Guevara, and Emily O’Reilly. 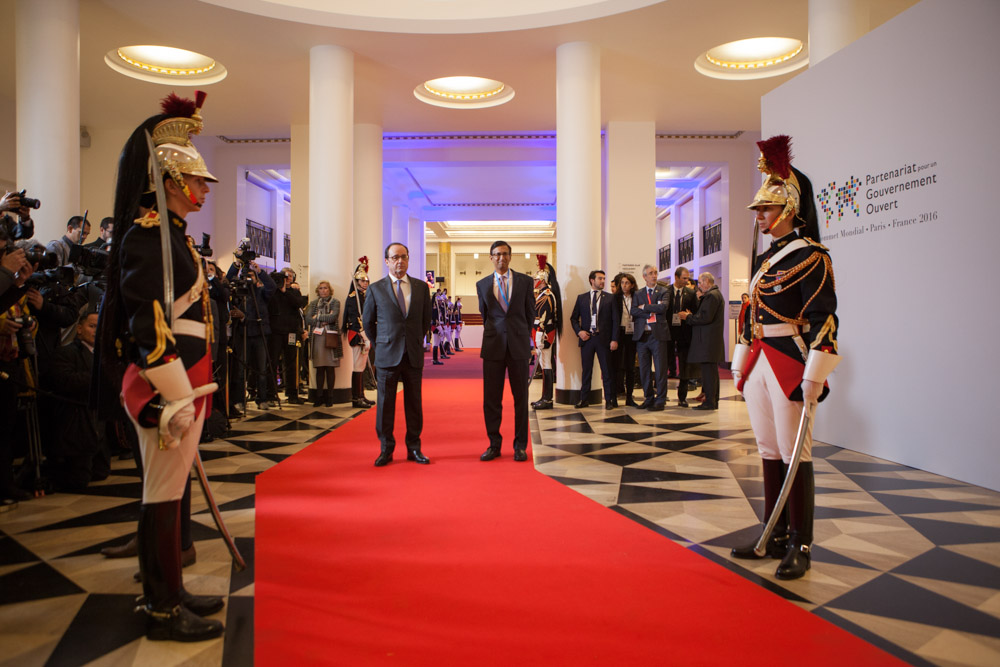 Over the course of the three-day Summit, some 250 panels, workshops and hackathons were held at venues throughout Paris. There were Open French Senate and Open French Parliament discussion tracks at the National Assembly, as well as a Democracy Night event at the Palais d’Iena and in venues around the city. A special series of discussions on subnational governance was held at the Hotel de Ville, which was also the site of an OGP Local Government press conference and the closing ceremony of the Summit during the late afternoon of December 9th. Video coverage from many of these events and plenary sessions can be found on the OGP Youtube #OGP16 playlist.

The OGP Global Summit was mentioned in well over 500 news stories and opinion pieces with important hits coming out of Argentina, Canada, France, Germany, the Netherlands, Mexico, Pakistan, Taiwan, the United States and Uruguay. Furthermore, the OGP Summit hashtag – #OGP16 – was the top trending hashtag in France on the evening of December 7th, and the top trending hashtag in Paris for most of that day. The newly debuted #OGPLocalGov hashtag was the top trending hashtag in Paris on the evening of December 9th. OGP’s Facebook page also saw a significant spike in activity with close to 300 new followers and a post published just minutes before the start of the opening plenary reaching more than 20,500 users. The recently launched OGP Instagram account similarly increased its following and featured photos and videos by three youthRecognizing that investing in youth means investing in a better future, OGP participating governments are creating meaningful opportunities for youth to participate in government processes. Technical ... representatives from Orange Magazine throughout the Summit.

In France, the OGP Global Summit was the subject of over 100 articles, radio and tv reports with many reaching audiences of over one million. Among these, top hits came from a piece in L’Obs authored by the Director of Etalab, Laure Lucchesi, and France’s Chief Technology Officer, Henri Verdier, promoting the potential of the “digital revolution” for a more participatory democracy. In a similar vein, an article published in Le Monde highlighted some of the citizen-led initiatives showcased at the Summit. Other widely read articles appeared in Les Echos and Le Parisien, the latter offering perspectives from French Secretary of State Jean-Vincent Placé. Several civil society groups capitalized on the media attention to publicly condemn the French government for a prolonged state of emergency in the months following major terrorist attacks, such as that of July 14, 2016 in Nice which killed 85 people celebrating Bastille Day while injuring many more.

Canada’s role in the open government movement was a prominent feature in Summit coverage. Former OGP Steering Committee member Aruna Roy and Canada’s Information Commissioner Suzanne Legault co-authored an opinion piece for Canada’s government and politics newsweekly, The Hill Times, in which they encouraged the government to leverage its historical commitmentOGP commitments are promises for reform co-created by governments and civil society and submitted as part of an action plan. Commitments typically include a description of the problem, concrete action... to transparency and take on a more active leadership role within OGP. And dozens of news aggregators around the world circulated an article by the Treasury Board of Canada, first published by Marketwired, highlighting Canada’s endorsement of the Paris Declaration.

In other Summit news, Anne Hidalgo, Elisa Peter, Eloise Todd, Gavin Hayman, Joseph Foti, Manish Bapna, and Winnie Byanyima contributed to a series of widely-read blogs produced for the US and French editions of the Huffington Post.

Coverage of the Summit was particularly  strong in Latin America. At least ten Spanish-language news sources covered Mexico’s Secretary of Civil Service (SFP) Arely Gómez González’s participation at the OGP Global Summit, highlighting several of her current open government initiatives including the Data Standard for Open Hiring (EDCA) and the expansion of the Ethics and Conflicts of InterestA key part of anti-corruption involves preventing or revealing conflicts of interest — when a public official is in a position to use public office for personal or private gain. Technical specificat... Committee. Yahoo! Noticias and Terra also covered Mexico’s Commissioner of the National Institute of Transparency, Access to Information and Protection of Personal Data (INAI), Joel Salas Suarez’s, participation at the Summit. At a ministerial roundtable titled “Creating Trust in Government,” Suarez reportedly encouraged a “rethinking of the relations between authorities and the population.”

Although Taiwan is not an OGP country, several Taiwanese news sources reported that Taiwan’s digital minister, Audrey Tang, attended the Summit. According to multiple articles, she drew lessons from digital innovations being carried out in several OGP countries, including France and the United States. Also in the Asia-Pacific region, the influential Jakarta Post ran an article about the Indonesian open government initiative, Perludem, whose centralized election data platform earned it third place in the Open Government Awards.

On December 6, the OGP Steering Committee received a letter from the Government of Hungary announcing its immediate withdrawal from the partnership. (The Government of Hungary had been under review by OGP since July 2015 for concerns raised by civil society organizations regarding their space to operate in the country). News of Hungary’s withdrawal  was picked up by the Associated Press in Budapest and then republished by nearly 90 different news sources, including the Washington Post, The New York Times and Fox News.

Although we do our best to follow media around the world, with over 70 countries in the partnership, we are bound to miss important stories. To date we have seen well over 500 articles, tv and radio pieces about the Summit. Please do share if you feel we’ve left something important off of this round-up!

And as we close out 2016 and look forward to a happy and productive 2017, we’d like to share a final quote from the Summit, this time from Support UnitThe OGP Support Unit is a small, permanent group of staff that work closely with the Steering Committee and the Independent Reporting Mechanism to advance the goals of the Open Government Partnership.... CEO Sanjay Pradhan:

In this next phase of OGP, let us join forces to unleash a powerful, vibrant, inexorable movement for open government that prevails upon the dark, looming threats to democracy and instead realizes that precious vision – of governments truly serving their citizens.

Happy New Year to all!