So What’s In Those OGP Action Plans, Anyway?

Over the last few weeks, Global Integrity has been busy poring over National Action Plans submitted by Open Government Partnership participant countries to make sense of the heaps of commitments contained therein. Last month we presented our analysis of the plans using SMART criteria on this blog. Our assessment gave us reason to be optimistic. Despite flexible interpretations of what constitutes a commitment, most countries met four out of the five SMART criteria. Not a bad score at all.

Since then we have turned our attention to categorizing commitments made by 45 OGP countries into specific issue areas.  We distilled hundreds of pages of documents submitted in electronic and PDF formats into discrete, easily digestible commitment activities, each of which were tagged using a list of 53 tags collaboratively developed with the OGP Support Unit. In all we applied over 1100 tags to more than 790 activities. What this exercise gives us is a clear map of open government reforms that countries are committing to. On the heels of Brasilia 2012, we now have vital intelligence to help us effectively customize and target country matchmaking efforts for a renewed Networking Mechanism, which Global Integrity is charged with implementing.

But knowledge of where the OGP commitment chips fall is not of interest to Global Integrity alone; it should be of use to the wider OGP community as well.  We hope this information will serve as a vital input into deeper analyses of individual country national action plans so civil society and other actors with a stake in OGP outcomes can prioritize their engagement, programming, and outreach efforts.

Before we leap to the results, a few words on methodology. This exercise is not intended to serve as a scientific taxonomical classification as much as an attempt to move past the turgid rhetoric saturating each National Action Plan and get to the substance of a country’s commitments. We use up to three tags to categorize each commitment activity. The intent here is to create enough descriptive metadata to accurately describe a particular activity without rendering the categories meaningless through wanton overtagging.  Tags cut both, horizontally (e.g. Capacity Building, Citizen Monitoring) and vertically (e.g. Health, Extractives & Natural resources). Some categories may seem conceptually fuzzy given the flexible definition of Open Government guiding the OGP. Consequently the tags are neither mutually exclusive nor collectively exhaustive (our apologies to McKinsey & Co. for violating the hallowed MECE categorization principle).  Finally, there were a few activities that were left untagged since it was unclear if they related to open government at all.

So what did we find? Listed below are the highlights, which are of consequence to the long-term viability of the plans and the Partnership itself. 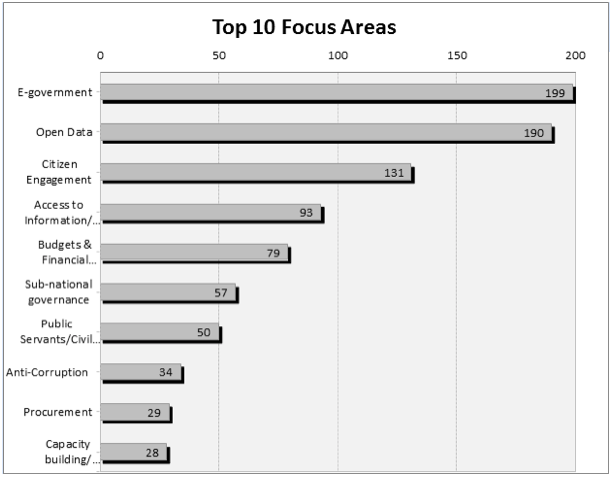 One-too-many stop shops? Unsurprisingly, open data and e-government are the most popular commitments across the Partnership. These two categories account for nearly a third of all open government activities countries are committing to. If the OGP had a penny for every mention of the establishment of a website, the Partnership would fund itself. It is always encouraging to see countries strive to modernize the machinery of government, but the preponderance of information technology projects in national action plans deserves further consideration. The appetite for neat technological fixes to complex problems shouldn’t eclipse the need for politically difficult but fundamental reform. Eventually all technological solutions run into the limits imposed by the institutional, legal, political, and socio-cultural contexts in which they are embedded. Therefore, essential reforms should be encouraged from the outset to alleviate the unique structural constraints prevalent in particular country contexts. Doing that would expand the frontier of possibility so open data and related technologies can maximize their potential. (Read Tom Slee and David Eaves’ exchanges for an incisive analysis on the promise and limits of open data). Case in point, there is no technological shortcut to greater judicial transparency in India. Ultimately even the most vibrant open data community and efficient judicial records management system will be undermined by the lack of legislation mandating asset disclosures across the judiciary.

Calling all citizens: Be informed and engage! The popularity of citizen engagement (the third most popular category), while unexpected, is encouraging. Despite detecting an eagerness from governments to learn about citizen engagement tools and methodologies during our conversations with government officials, chronic complaints from civil society organizations on being excluded from consultations during the plan drafting process led us to believe that citizen engagement would not feature prominently in country commitments. The relative popularity of citizen engagement commitments presents a real window of opportunity for citizens to create spaces for deeper engagement with the state on a variety of open government issues. The next priority for governments is Access to Information with over 90 activities tagged as such. Commitments in this area run the gamut: from strengthening legislation to ambitious capacity building and technological initiatives. Since access to public information is an important component of informed citizen engagement, civil society will need to hold government’s feet to the fire on following through on these commitments to widen the scope of public participation in government affairs.

The missing link? Private sector issues are conspicuously underrepresented in country action plans. Only 44 tags cover issues such as public private partnerships, regulations, private sector transparency, and corporate social responsibility initiatives, to name a few. For the OGP to truly become a broad-based multi-stakeholder initiative, commitments should address the openness of the private sector especially in crucial sectors such as extractive and financial services. Moreover, the Partnership must carve a meaningful role for private sector organizations. It would be a terrible waste of opportunity to ignore the resources and capabilities that the private sector can bring to the table especially considering their active participation in development projects at the behest of governments and international organizations.  The yawning gap in awareness and enthusiasm among private sector companies for OGP will need to be addressed strategically by measures that go beyond merely engaging them as suppliers for the Networking Mechanism.

Legislate, don’t “innovate” Another blind spot in action plans is the marginalization of commitments dealing with the legislative and judicial branches of government. Most commitments focus on government departments under the purview of the Executive, privileging “innovative” solutions like e-government over the more fundamental and politically fraught legislative and judicial reforms, which are key if the OGP is to embody the grandest notions of Open Government. Worryingly few commitments are ambitious enough to tackle harder, “stretch” issues such as campaign finance, public asset disclosure, financial services sector transparency, etc., which require the passage of broader statutory reforms. As the Partnership develops, country governments will need to tackle crucial institutional challenges through legislation so the change in the culture of government sought by the OGP can firmly take hold. There were other surprises as well: despite the financial crisis giving way to a long tail of persistent recessions globally, not a single country directly commits to opening up financial institutions or services.  Similarly only 10 activities explicitly relate to extractive industries and natural resource issues. One would think that easy access to soft standards like the EITI—with the United States joining as a recent prominent signatory—would make these commitments more attractive for countries to include in their national action plans.

Given the volume of data gleaned from the 45 plans, we think we have barely scratched the surface. We view this exercise only as a start. By no means should it be considered an exhaustive analysis of all the action plans. So feel free to dig into the data, draw your own conclusions, and highlight what you think is important. We welcome your thoughts on building on/ improving our approach (the spreadsheet of commitment activities and tag counts can be found here). Further, this assessment is not intended to serve as a shameful catalog of lost opportunities. Instead we hope this exercise sheds light on the areas and ways in which we must remain engaged to make this partnership work.