Deliberation: Getting Policy-Making Out From Behind Closed Doors 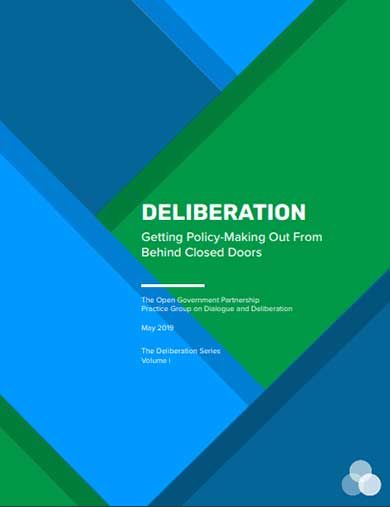 This publication is Volume I of The Deliberation Series, a collection of papers on public deliberation, researched and written by The Open Government Partnership’s Practice Group on Dialogue and Deliberation.

Creating a space for dialogue between people and the governments that serve them is the bread and butter of the Open Government Partnership. In 79 countries and 20 local members, governments have committed to working with civil society in support of more transparency, accountability and participation.

Perhaps unsurprisingly, it is this last one that often proves most difficult to get right. Meaningful participation is about fundamentally changing the culture of government. It is about seducing citizens to participate in processes that will be worth their while. It is also, critically, about power and access – about who gets to be in what conversation. Changing those dynamics in favour of more open and inclusive ones is not a one time effort, but a life-long one.

If you believe in what OGP stands for, this is not getting any easier. Trust in institutions is still very low across the globe. Many people feel left behind or worse off. They fear for the future, and worry about their cultural identity. And they perceive democratic institutions to be captured by elites, whose actions benefit the powerful at the expense of the people they should be serving.