Parliamentary Engagement in OGP: Learning from the Evidence 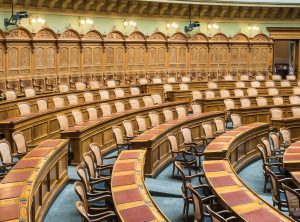 This paper aims to inform the Legislative Engagement Policy review and serves as background for consultations with parliaments and partners. It draws on data from the Open Government Partnership (OGP) commitments database, reports from the Independent Reporting Mechanism (IRM), findings from the OGP Support Unit, and insights collected through a range of formal and informal conversations with OGP stakeholders since 2011.

Part I reviews the substance of engagement, demonstrating significant variation in both quality and quantity:

First, as OGP data shows, ambition often comes from effective engagement and co-creation. Good communication – and collaboration where possible – between government, parliament, and civil society is essential for parliaments to support and contribute to OGP commitments and open government reforms. OGP will develop improved guidance for all stakeholders to work towards shared goals throughout the OGP process, with respect for the separation of powers.

Second, in a number of cases, the integration of open parliament plans in OGP action plans – requiring parliaments to work on the same two-year timeline as their executives – undermines their potential.  Such an ‘integrated’ OGP action plan remains the preferred option, but is not feasible across all contexts or systems of government.  In reviewing the policy, OGP will consider how rules can be modified to allow a greater focus on substance going forward.

OGP has seen substantial traction of parliaments as implementers of OGP commitments and reforms as well as in the co-creation and implementation of open parliament commitments and plans. As OGP steps into its second decade, parliaments will remain instrumental in delivering on open government ambitions. The revised parliament policy will enable all members of the OGP community to explore this to the fullest.