Inclusion in OGP: A Closer Look at Commitments Around People with Disabilities, Youth, and the LGBTQIA+ Community

Inclusion is fundamental to open government. In order for governments to be truly open, they must serve all people – including those who may have specific needs or lack political influence. The Open Government Partnership (OGP) has served as an important platform for reform in this area, including on gender equality through the Feminist Open Government initiative and the Break the Roles campaign. Since 2011, OGP members have made over 400 commitments related to the inclusion of historically underrepresented communities in open government efforts. 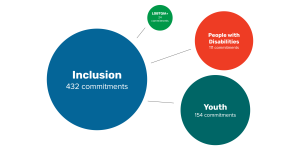 Commitments that address people with disabilities and youth have become more popular in recent years, while commitments involving the LGBTQIA+ community have remained low. The percentage of commitments that reference people with disabilities and the percentage that reference youth have both tripled in the last two years in comparison to the prior eight years. This encouraging amount of growth shows that OGP members are actively working to include the perspectives of these groups into commitments across a range of policy areas.

Figure 2. More members are referencing youth and people with disabilities in commitments 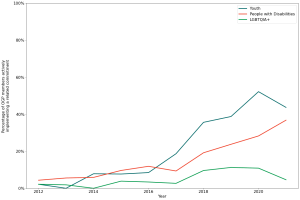 While commitment adoption in these three areas has varied by region, members in the Americas have shown the most consistent efforts to strengthen inclusion. Adoption of commitments related to youth and people with disabilities has been high in many regions, but members in the Americas have shown strong efforts to address all three areas of inclusion, especially LGBTQIA+ (Figure 3).

Figure 3. Commitment adoption in these areas of inclusion varies by region 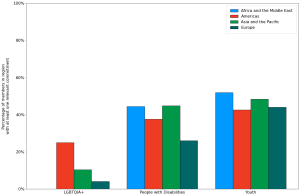 Commitments by Level of Government

Local members tend to focus more on these areas of inclusion than national members. While both national and local members have shown dedication to inclusive reforms, a greater percentage of local commitments have focused on the inclusion of LGBTQIA+, people with disabilities, and youth in comparison to national commitments (Figure 4). 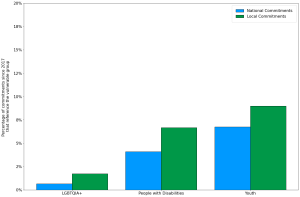 For commitment examples or additional information on how to incorporate these areas of inclusion into your country or locality’s next action plan, check out the following resources:

All data from this analysis is available in open format in OGP’s public commitment database. Users can also explore this data further in an OGP commitment dashboard that will be published in the coming months. Any questions about how to use the data can be directed to research@opengovpartnership.org.