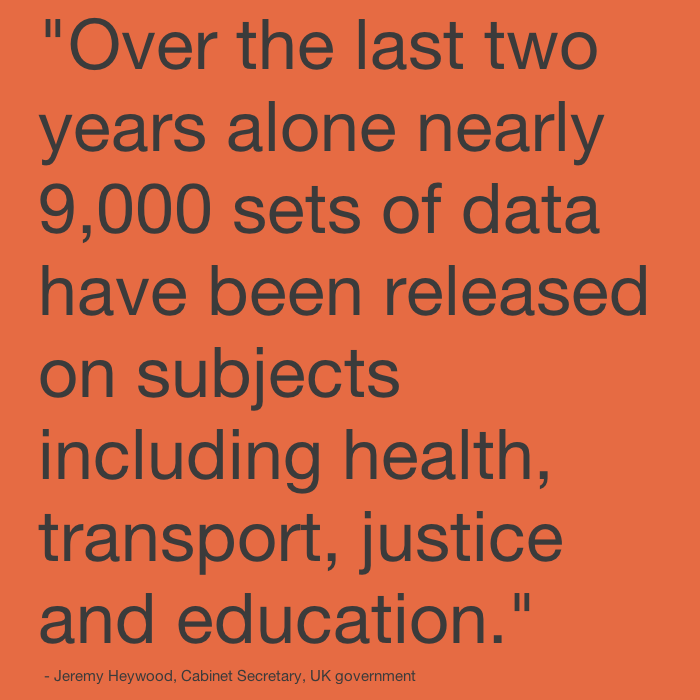 The UK’s Cabinet Secretary was originally writing in The Independent about the motivation behind Whitehall’s data crusade.

For as many years as Britain has had a centralised civil service we have been rather good at collecting information. From the first censuses in 1801 to the creation of the Central Statistical Office by Winston Churchill, the amount of information gathered and held by Government has exponentially increased as our society has become more complex. Today we hold raw information on everything from pupil performance by class, crime levels on every street in the country and the success rate for every single operation in your local hospital. We can even tell at the touch of a button how late your train into work is likely to be.

But while we’ve been steadily improving the way we collect data, if we’re honest, historically the civil service has been less good at releasing it to the people who most need it and can make most use of it: the public. That is changing. Over the last two years alone nearly 9,000 sets of data have been released on subjects including health, transport, justice and education. All of this information, which is anonymous, can be used to understand issues of importance to the public and fashioned into innovative data-driven new businesses that will provide a service to the public and boost economic growth.

But which data is it best to release? A process is now in place to decide and put more power in the hands of users. The Open Data User Group, made up of members of the data community, and drawing on suggestions from business, academia and the general public, recently made its first recommendations to the Data Strategy Board for open data that should be prioritised for release. Data releases won’t always be comfortable for the civil service or government – but that is rather the point of transparency, giving people the information they need to make choices about their lives and highlighting areas where the public sector is under-performing. Eventually the raw data we release will allow the public to assess how well their local school, their local hospital, council and police force are doing and provide a powerful incentive for improvement. Put simply Government’s aspiration is to make Britain the most open, transparent country in the world. Handled correctly this will be a tremendous force for good. It is essential we take the opportunity to deliver a more open and transparent civil service, whether sharing information or developing policy. Within the service we have some of Britain’s foremost experts on the biggest issues the country faces, but we don’t have all the experts.

But this transparency agenda does not stop at our borders. The Open Government Partnership (OGP) met in London for the first time this week, with Francis Maude representing the UK as the lead co-chair. Mary Robinson, Mo Ibrahim and Graca Machel were confirmed to the International Expert Panel that will advise the partnership. Since its establishment as a global movement the OGP has grown from 8 founding members to 58 governments now committed to delivering greater openness and accountability in their countries. Transparency makes for better Government and the British Government is determined to retain our global leadership. We are pushing that agenda both nationally and internationally.