Is Net Neutrality Preserving the Openness of Government in the North American Context?

Net neutrality, the principle that all online content should be equally accessible without Internet Service Provider (ISP) interference, has become rather contentious and is currently at risk in the United States. Rules and policies involving net neutrality are designed to prevent throttled walled gardens, meaning ISPs are not able to use their privileged position to give preferential treatment to certain applications or services in an effort to control user access. Net neutrality becomes critical for preserving the openness of government itself, which will be clear upon examination of the approaches taken by Canada and the United States.

After being designated Chairman of the Federal Communications Commission (FCC) in January 2017 by President Donald Trump, Ajit Pai was reconfirmed by the U.S. Senate to serve a 5-year term on October 2. Pai has vowed to dismantle net neutrality regulation approved by the FCC in 2015, asserting that current restrictions were based on hypotheticals that suppress investment in broadband networks and telecommunications infrastructure and that rules regarding media concentration that limit the number of television stations a single company can own in a single market are unwarranted.

These views echo the sentiments of telecommunications companies which, to a large extent, seem delighted with the notion of deregulation. Proponents have praised Pai’s efforts to ease allegedly outdated regulatory burdens on local radio and television and his favouring of policies aimed at encouraging innovation and economic growth with the intention to best serve customers. This sounds promising, but in placing limitations on consumer choice and access while encouraging greater media concentration by relinquishing control to ISPs like AT&T, Comcast and Verizon, this is not truly in the customers’ best interest. This becomes questionable in regards to privacy as well, in which protections to limit the ability of ISPs to disclose subscriber activities have been deemed unnecessary.

In the Canadian context, the Liberal government has regularly cited the importance of net neutrality, demonstrated in references within Budget 2017 and statements from Ministers Navdeep Bains and Melanie Joly on the value and need for net neutrality. This support is consistent with the regulatory framework created by the Canadian Radio-television and Telecommunications Commission (CRTC) protecting against “unjust discrimination, undue preferences or controlling the content of communications”. In practice, this is seen in a 2009 case in which the CRTC expressed concern that Bell, one of the largest telecommunications companies in Canada, may have been inhibiting the introduction and growth of other mobile TV services accessed online, reducing innovation and consumer choice by acting as a gatekeeper of content.

Often, it is claimed that net neutrality policies are a solution in search of a problem, but this ignores the many incidents in recent years requiring regulatory intervention in both Canada and the U.S. (e.g., AT&T disabling FaceTime on its customers’ iPhones in 2012 unless they subscribed to more expensive text-and-voice plans). In the absence of any regulation, these violations of net neutrality would become increasingly prevalent.

These developments in the U.S. have been met with apprehension, with opposition sites like Battle for the Net being created to raise awareness on net neutrality and encourage action like calling Congress to prevent these changes from occurring. Even in the U.S., large media companies such as Amazon, Google and Facebook are uncharacteristically uniting with smaller companies such as Reddit and Netflix to protest the proposed changes, in addition to outcry from the public. 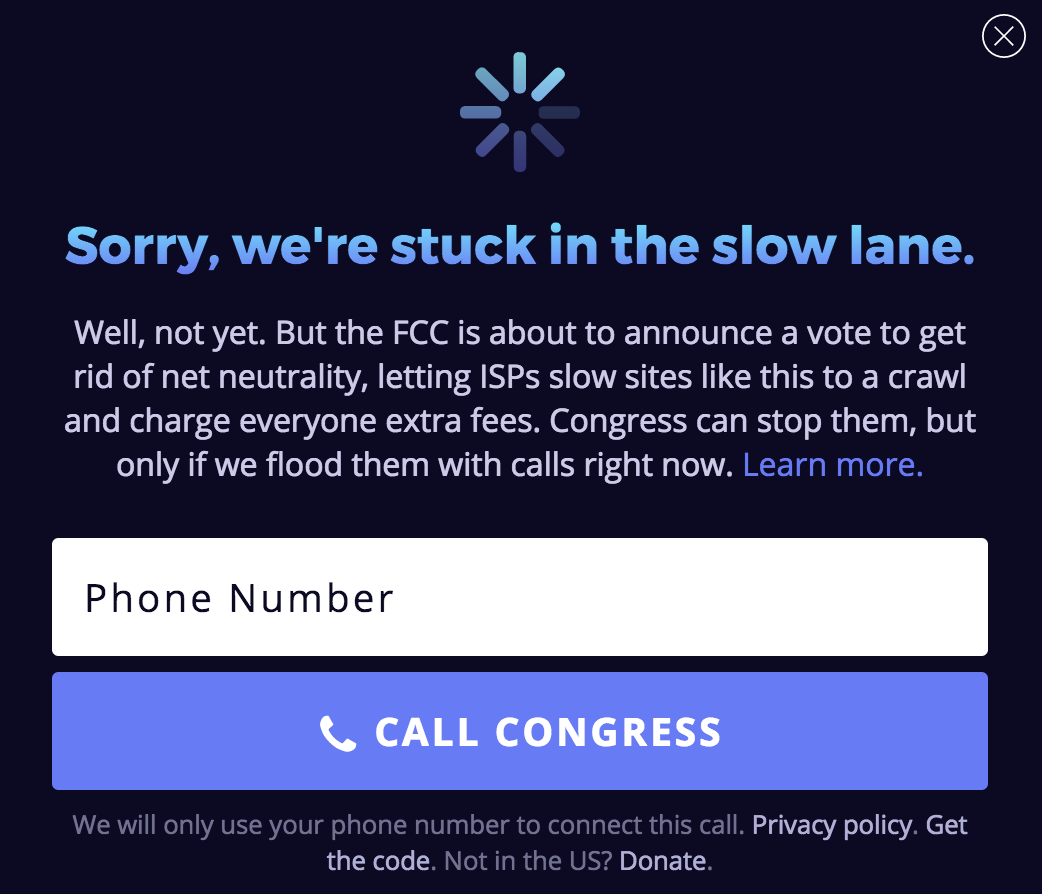 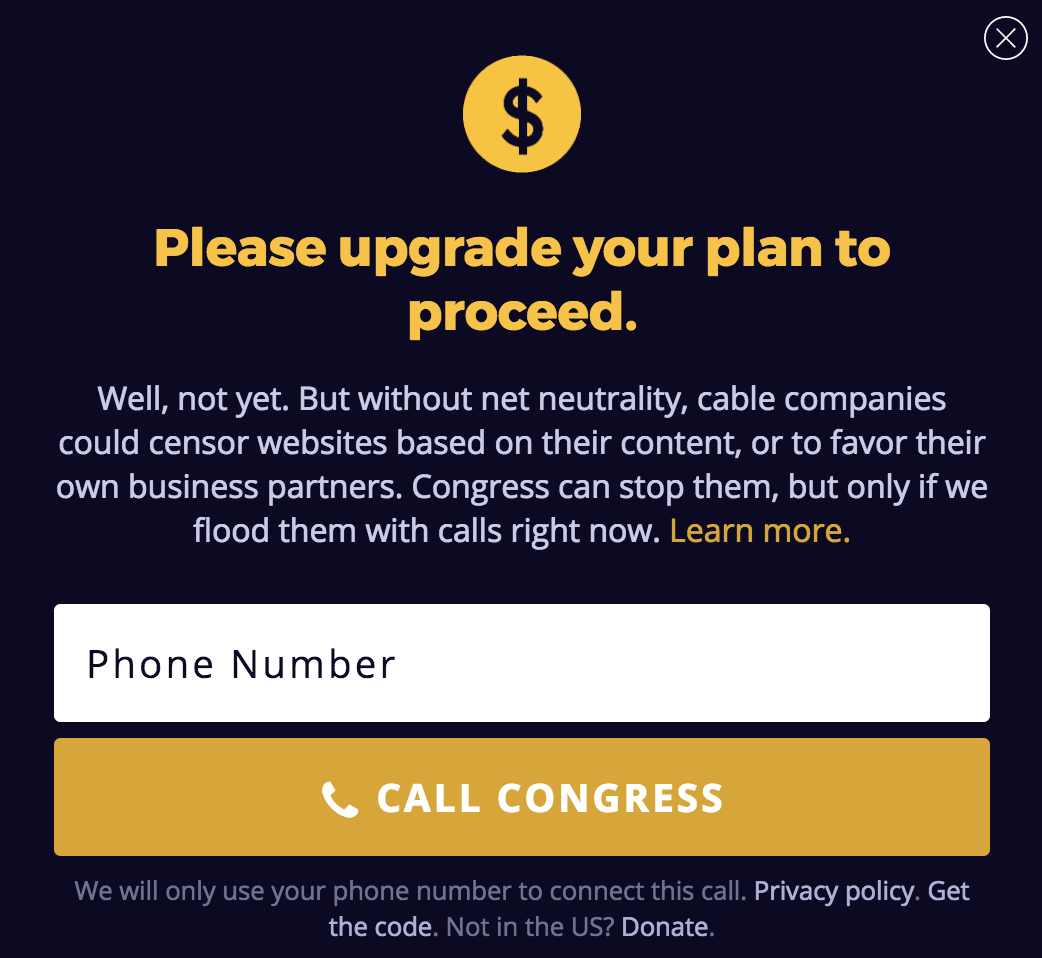 When governments threaten to abolish net neutrality, the possibility for a collaborative, open democracy is limited. Without net neutrality, the many open government initiatives that rely on the Internet to provide access to information, data and engagement activities would be compromised. Further, if citizens cannot have unimpeded and open access to the Internet because of actions their government has taken, how can they believe this government is open itself in other respects and acting in their best interest? This raises questions over biases within these decisions – what are the actual goals of government in reversing these policies? The intertwinement of government and large corporations is concerning, especially when this ignores the desires of citizens, limits their experience and encourages a lack of diversity.

By eliminating rather than safeguarding net neutrality, which protects consumer choice and ensures a diversity of voices are present, governments risk a loss of citizen trust as well as their ability and willingness to participate. The proposed U.S. deregulation shifts unprecedented power into the hands of a few, positioning itself in contrast to the Canadian approach to net neutrality that places consumers in control. The Canadian approach may then provide an attractive alternative that recognizes net neutrality as essential to preserving the openness of government as well as the Internet itself.

For further information on net neutrality and the potential policy changes in the U.S., John Oliver explains the complexities of this debate and opens up opportunities for viewers to get involved in this video from May.