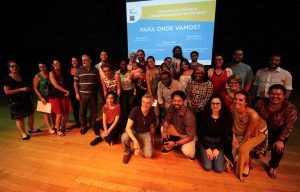 In 2019, after following the city’s work on open government for a year, I began representing WRI Brasil (the Brazilian office of the World Resources Institute) in the Fórum de Gestão Compartilhada (Shared Management Forum) of the Municipality of São Paulo. The Forum was established to allow for dialogue among stakeholders on the municipality’s participation in the Open Government Partnership (OGP). Taking part in an ongoing process to jointly develop and agree on open government reforms is challenging in any case; being part of a Forum composed of different entities, representing different social groups and perspectives, is even more challenging.

Laying the Foundation for Open Government in São Paulo

Since April 2016, the city of São Paulo has been one of the pioneers in the OGP Local Pilot Program, along with 14 other subnational governments. Starting in 2013, with the creation of São Paulo Aberta (Open São Paulo), the city has been promoting open government initiatives, aiming to implement public actions and policies with the active participation of civil society.

The City Council assumed the commitment to OGP and, therefore, the responsibility for drawing up periodic Action Plans to foster transparency, social participation and technological innovation in municipal management. The city’s first OGP Action Plan, with five open government commitments, was developed in 2017. As part of this, the Open São Paulo project was linked to Goal 49 of São Paulo’s Goals Program (2017-2020), with the aim of ensuring that 100 percent of the data published by the City Hall is available in an open format that can be accessed with basic tools.

Following that, in May 2018 the Shared Management Forum was established to develop, implement, and evaluate the results of the Second OGP Action Plan of São Paulo (2018-2020). Eight elected civil society entities and eight government representatives comprise the Forum and hold periodic meetings to discuss strategies and methodologies to improve social participation in the city.

Throughout 2018, the Second Action Plan was under development with increased social participation compared to the first plan. With the support of the OGP MDTF, the civil society organizations of the Shared Management Forum together with Open São Paulo planned territorially decentralized participation activities. In a city the size of São Paulo, it is crucial to decentralize activities to reach and give voice to the vulnerable populations living in the periphery. Ten thematic Action Plan co-creation workshops were held in different neighborhoods of the city, in addition to two online public consultations. By the end, there had been more than 200 participants in the workshops and around 2,500 online contributions.

Opportunities for more broad-based participation extended not only to civil society and grassroots organizations, but also to universities and, importantly, to the technical staff of different government agencies, which improved and expanded the communication among Municipal Secretariats. There was knowledge exchange and a deep debate of ideas and perspectives on evaluating the results already achieved.

The increase in participation and debate during the process demonstrated that although the open government agenda has advanced in recent years, it has not been without difficulties. Consulting a broader range of stakeholders opens the process to more ideas, but at times they are at odds with one another. In São Paulo, these tensions did not occur only between members of civil society and public administration, but also internally in the organizations that are part of the Forum, and within the government itself. While challenging, these tensions are also necessary and fruitful, as they contribute to the advancement of a plural and democratic debate. 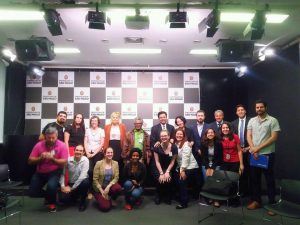 Moving Forward Despite Different Perspectives What the process showed is that one should not avoid divergence of views or always aim at a consensus. The role of the Forum is to find a way to understand and deal with the differences in a collaborative and participatory way. The plurality of actors involved in the process creates a positive confrontation of ideas and contributes to the development of public policies.

As Marcus Vinicius de Jesus Bomfim, representative of FECAP in the Shared Management Forum stated, “I recognize that the main learning of the Forum is sharing, making the government think and listen to civil society before acting. Also, on the part of civil society, it’s a chance to learn about public management. Without this knowledge, it’s not possible to advance this agenda. There were tensions between government and civil society, but it is this confrontation and close relationship that builds the conviction that, despite the fact that we have a lot of work to do, we are in the right direction.”

Henrique Góes, Open São Paulo Advisor affirmed, “The involvement of the Shared Management Forum ensured that the co-creation process was more inclusive. It was different from participation models typically used by the public administration in Brazil. I think it was an important space to create bonds of trust between citizen and government – in many spaces, I’ve noticed that the fear of the people at the beginning of the workshop was transformed into excitement in the end. This was a spectacular gain.”

All of the efforts to work through the varying interests and ideas led to a robust Action Plan reflecting different territorial and social needs. It also means that an engagement process for co-creation and planning of participatory commitments and tools has been established, creating official channels for civil society to have greater access to and develop partnerships with local government decision makers. 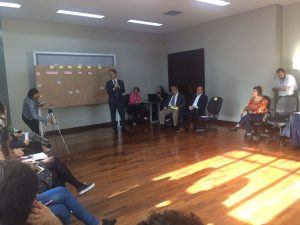 In its Goal Plan for the 2019-2020 biennium, the city included “the implementation of 100 percent of the commitments of the Second Open Government Action Plan” and reserved resources for its implementation. “The institutionalization of the actions guarantees the commitment of the municipal administration regardless of possible changes in the government. Integrating São Paulo’s Goals Program strengthens open government actions and is a sign that the city is committed,” said Patrícia Marques, the Open Government Issues Supervisor. “It will be a support to realize necessary actions that may not be happening.” This is a major achievement that showcases the progress of the city in (i) raising awareness of the importance of transparency in public administration and decision-making processes; and (ii) legitimating the open government agenda and the strength of collective action by the entities of the Shared Management Forum.

Today, we can see a much deeper understanding of the role of open government in São Paulo. Following the publication of the Second Action Plan, the Forum’s role is to maintain stakeholder engagement and monitor the established commitments. It was at this stage that I became a representative of WRI Brasil in the Shared Management Forum. From an outsider’s perspective, at first it seemed to me that there was a lack of medium- and long-term planning, which could create avoidable problems. Once I understood the decision-making process, I came to realize that a truly participatory process requires time for goal articulation, mobilization, and engagement. When there is this space, even if there is tension, people get involved knowing their voice will be heard. Maybe the greatest learning that I take from this is that we don’t always need to reach a common view – it is important to learn from and take different perspectives into account.