Now that the OGP World Summit call for proposals has wrapped up: an overview of the ogpsummit.org dashboard

A 3 months long call for proposals, attracting 1542 users, resulting in 660 effective proposals: French and international administrations and civil society organizations have once again shown great interest and support for the openness and collaboration initiatives driven by the Open Government Partnership. Many thanks to all for your input!

The OGP Summit co-creation efforts were held online at ogpsummit.org, a platform designed to crowdsource the agenda. Real time editing, proposals open to the public, voting capabilities as well as the ability to start and get involved in discussions with all other participants have allowed the various actors to contribute iteratively and collaboratively to the agenda framework.

Events in France (launch workshop on April 20th et Futur en Seine workshop) and internationally (workshop held during the OGP Regional Summit in South Africa and other workshops at the OGP headquarters in Washington D.C)  have highlighted the momentum. Thanks to the creation of barcamp, participants in the contribution efforts have worked on event proposals, conferences, workshops and pitch sessions which echoed OGP’s main topics.

The proposals (available here) have been submitted by diverse actors, be it from their institutional origin or their geographic location. They cover all the essential challenges of open government in creative and innovative formats.

Because a picture is worth a thousand words, we are sharing below a glimpse of the backstage workings of the call for proposals with this snapshot of the ogpsummit.org dashboard, which is available to the web administrators and to the Programme Committee: 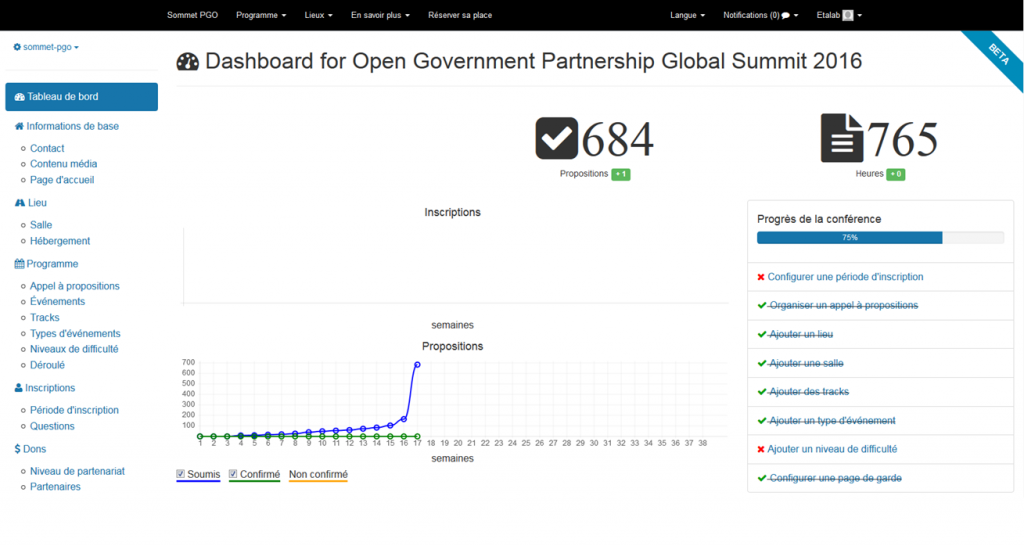 The flagship topics that have surfaced from the call for proposals are: “Open Government Implementation”, “Transparency, accountability and the fight against corruption”, “Civic tech and participatory tools”, and “Open data and resources”. Some of the main contributors are the Open Data Institute, Maurice Thantan of the Benin Bloggers Association, Regards Citoyensand Open Data Soft.

In the next few weeks, the Programme Committee will review the proposed events in order to determine the broad topics of the final summit programme, to be announced in September. The decisions will be based on the selection criteria detailed in the call for proposals.

It is not too late to influence the final selection. Voting and comments regarding the various proposals will be open until the end of August at ogpsummit.org.