As the OGP topic becomes increasingly popular and even trendy around the world, post-Soviet countries (despite the long-time tradition of their officials building an imaginary glass wall that held them off their citizens) now also keep abreast of new instruments for open governance promotion. Thus, NGOs (mostly National Chapters of Transparency International) and government representatives for five Eastern Partnership countries (Georgia, Armenia, Azerbaijan, Moldova, Ukraine) and Russia were involved in a one-year project conducted by Transparency International Ukraine.

The project aimed at following up, studying and analyzing the OGP progress of the aforementioned states, as well as finding common ways and decisions to make the implementation process of the initiative more efficient and realistic, and to facilitate and influence the process in general. Now, after the months of joint cooperation, productive meetings of people, devoted to the ideas of openness and transparency (representing both civil society and governments), their bright ideas, and sleepless nights, we can proudly speak of the progress and our input in the growing attention to the Open Government Partnership sphere, as well as in positive movements towards implementation of its ideas and principles. One of the reasons for this was that the project facilitated communication between CSOs within the countries and influenced establishment of national NGO coalitions working in the OGP area, as well as helped to maintain the dialogue between the civil society and governments of the states involved in the project. Besides, speaking of the common ways and decisions aimed at improvement of the OGP initiative implementation in the Eastern Partnership countries and Russia, we surely should name the website ogpractices.org as one of the most brilliant and effective. 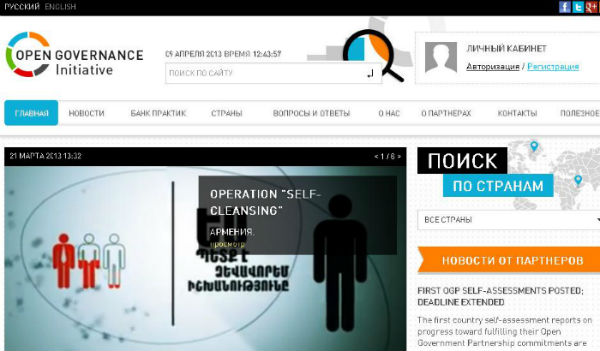 Do you know about the ambitious plan of Moldovan Government to become completely paperless and to transfer to the electronic reporting by 2020?

Aren’t you surprised with the fact that Armenia witnessed the problem of decreasing citizens’ trust with the growing number of governmental websites aimed at informing people and e-cooperation with them? What are the steps Armenia is taking to change the situation for better?

Do you know that Russia introduced a special position to maintain the OGP process in the state – Minister of Open Government?

All this information, as well as a huge number of other interesting and even surprising facts about the OGP initiative developments on the post-Soviet field, can be found on this new website. The site “Open Governance Initiative” creates new opportunities for influencing the OGP, e-governance sphere in the countries of the project, an opportunity to share ideas, positive experiences, and recommendations of partners how not to trigger a backlash. The website serves as a constantly-replenished collection of successful countries’ practices in the fields of increasing governmental openness, establishing effective and operative dialogue between the society and officials, introducing electronic services to make cooperation between people and governmental agencies easier. The practices are generally replicable and can be used by state agencies and NGOs in the countries involved in the project, and in other countries that work towards opening of their governments both. We expect that the online instrument will facilitate communication, cooperation and data dissemination not only for the six aforementioned countries, but also for other states, as they could find there a lot of useful information and pieces of advice.

The platform currently operates in two languages – English and Russian, as they serve the largest amount of people in the region. However, country representatives can upload data in their languages for the internal usage by citizens within their home states. The interface is user-friendly, so it provides easy access to the information. The site is also interactive – users can send their questions to the administration in case they haven’t found what they are looking for as the details of all national contacts are also available on the website.

Don’t just take our word for it though! Check out all of the advantages of the website yourself! We are happy to introduce ogpractices.org to you and to invite you to try it, share your ideas, use the partners’ experience, suggestions and practices, and improve it. Let’s take all opportunities we have to make our governments open to us!