Optimism in the Face of Transition – Bojonegoro

It was 2018, and Bojonegoro (a regency in East Java, Indonesia) was facing a Regional General Election for a new Regent. Those who had been involved in the Open Government Partnership (OGP) locally knew that a transition in leadership would pose a risk to the regency’s continued OGP participation. This made it incumbent on Aw Syaiful Huda, Director of the Bojonegoro Institute (BI), and other civil society colleagues shepherding OGP processes in Bojonegoro to think of steps to ensure that the work would go on.

“We realized at the beginning that we would face considerable challenges. First, we knew we must prepare the OGP 2018-2020 Action Plan during a leadership transition in the government. Second, the Action Plan would be implemented in the period of the new regent. Whatever the situation, we remained optimistic. We knew we could not give up and lose our hope,” said Syaiful  confidently.

Three years earlier, Syaiful and his colleagues at the Bojonegoro Institute had begun ushering in the era of Bojonegoro’s participation in the OGP. Bojonegoro was selected as one of the 15 pioneer governments in the OGP Sub-national Pilot Program in 2016.

To Syaiful’s delight, the early years of implementation ran smoothly, and collaboration with local government became well-established. At the end of Bojonegoro’s first period in the OGP, he and other civil society activists were hopeful that OGP-inspired practices would continue and grow stronger over time. He believed that open government and public participation would increase public trust in the government and create more space for innovation in local development. However, local champions of the initiative recognized that it would be a significant challenge to sustain momentum during a leadership transition. 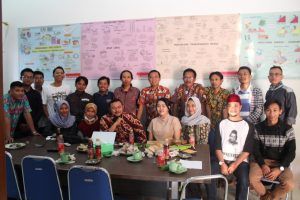 The period of leadership transition did have a profound effect on the preparation process for the Bojonegoro OGP Action Plan for 2018-2020. In early 2018, Acting Regent Dr. Suprianto, SH, MH, who was new to Bojonegoro, took office. The Bojonegoro Institute worked to consolidate and coordinate an informal group of key stakeholders in the region, including government officials, other members of local civil society, social groups, and journalists, to respond to the new leadership dynamic. They agreed on strategic steps and a division of roles to establish communication with the Acting Regent, and made considerable efforts to convey the objectives for preparing the Action Plan. The challenge was compounded by the Acting Regent’s perception that OGP activities were only part of the former regent’s agenda, and hence they were not a priority.

In addition, the Bojonegoro Institute reached out to the Open Government Indonesia (OGI) Secretariat, the Office of the Presidential Staff (KSP), and national civil society networks for help in communicating the national significance of OGP. “I contacted colleagues in Jakarta, including OGI and KSP Secretariat, because I believed if the national level government communicated the importance of OGP, it would be more accepted by local officials,” said Syaiful.

Following a meeting that included the OGI Secretariat, the KSP, the Acting Regent and his key officials, Syaiful Huda met with the Acting Regent informally to deliver the agenda that had been put together for preparing the Action Plan. “Regent Suprianto supported the agenda and handed over the preparation and technical implementation to his First Assistant. I felt this was a small victory for our joint effort. We never gave up,” he said.

Although the Action Plan preparation activities felt plodding at first, they were made possible by the participation of numerous key local champions. Overall, the dialogue ran smoothly. However, there was quite a debate over the nine proposed commitments. CSOs sought more ambitious goals, but Regional Working Unit (abbreviated as SKPD) representatives were aware that the financial resources available for implementation were limited. Through compromise, the stakeholders agreed on five commitments, and in August, the Draft OGP Action Plan for 2018-2020 was successfully submitted to the OGI Secretariat.

For Syaiful Huda, there were five noteworthy achievements: 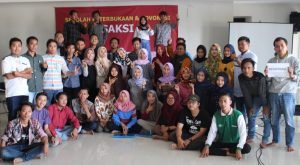 In September 2018, Anna Muawanah and Budi Irawanto were appointed as Regent and Vice Regent of Bojonegoro, respectively, for the 2018-2023 period. This marked an era of new leadership in Bojonegoro, and sustaining involvement in the OGP depends on their commitment to the agenda. Various stakeholders have tried to establish a relationship with the new regent on this issue, but so far there has been limited response.

It is common for leadership transitions to impact development agendas and strategies. Today’s challenge is how to promote the OGP as an appropriate model for developing good governance. Kusnandaka Tjatur, the Head of the Bojonegoro Communication and Information Office, is a strong advocate who has been overseeing the implementation of OGP at the technical level. As an OGP champion in the local government, he aims to use persuasive communication strategies to maintain the momentum toward openness by looking for entry points within the Regent’s agenda.

Kusnandaka is optimistic that the Bojonegoro government will continue to value openness. In fact, to date, openness practices are still ongoing, although they are labeled differently. “The Regent prefers the terminology of Transparency, Government, and Accountability (TGA) as her legacy. This, in essence and practice, is very similar to the values ​​and spirit of the OGP,” he said.

Kusnandaka also mentioned that four of the five commitments in the current Action Plan are moving ahead as planned. In the area of open contracting, for example, an application was developed that is automatically updated with new data from the national government procurement data system. However, the regional regulations related to Community Health Service Standards and for civic registration records have not been published as planned.

Syaiful expressed his apprehension by saying, “What concerns me is that the new regent perceives the OGP as a pretentious project of the previous regent… Therefore, to maintain the sustainability of the OGP we are using public promotion and soft campaign strategies.” As part of this, the Bojonegoro Institute recruited and trained around 100 volunteers to voice and promote values ​​and transparency practices. “They can be infomediaries for citizens,” said Syaiful.

Lilis Aprelliati, one of the Bojonegoro Institute activists, conceived the idea of working with Transparency International Indonesia and Indonesia Corruption Watch in collaboration with the Corruption Eradication Commission (KPK) in order to generate more momentum behind the values and principles of open government in Bojonegoro. As a result of this collaboration, Regent Muawanah signed a Joint Commitment for an Integrated Corruption Eradication Program with KPK in March 2019. This was seen as a positive signal about the government’s commitment to good governance. Now Lilis feels more optimistic that support from the regency’s citizens will help sustain open government approaches. The stages are indeed to build awareness first, then turn it into a movement, so that henceforth the government’s openness will become habit or culture.

The progress made during the leadership transition included the joint accomplishments of multiple stakeholders committed to open government. There is still much work to be done. Syaiful remains hopeful and sees a significant role for OGP stakeholders to play in this new environment. He stated, “Our duty is to guard the values of openness, transparency, accountability, and to build innovations based on public aspirations.”