Participatory Budgeting: Spreading Across the Globe

Participatory budgeting’s (PB) roots lie in a radical democratic project led by the leftist Workers’ Party in Porto Alegre, Brazil in the late 1980s. Radical democracy includes incorporating ordinary citizens into government decision-making priorities, an inversion that led governments to allocate public resources to underserved areas (shantytowns) and policy issues (basic health care), with a strong emphasis on social justice. PB was designed to be a “school of democracy,” whereby citizens learn to deliberate, learn about the functions of government, and begin to engage in democratic practices (Baiocchi 2005).

Since the late 1980s, PB has spread around the world in several waves. PB first spread within Brazil, largely promoted by a network of NGOs and a political party, the Workers’ Party.  Municipal governments and their civil society allies were willing to adopt PB because of the early positive reports—relatively high levels of participation, increased spending in low income neighborhoods, and the successful re-elections of governments that supported PB. In the late 1990s and early 2000s, Brazil’s neighbors adopted PB in the second wave. In Peru, for example, the national constitution was amended to require all municipal-level governments to use PB.  In addition, PB was adopted by cities and municipalities in Argentina, Ecuador, Uruguay and Venezuela. PB’s third wave of diffusion mostly involved leftist governments adopting PB in places as diverse as Europe (Spain, Italy, Portugal, and the United Kingdom), the U.S. (Chicago), India (Kerala), Indonesia (Solo city) and Africa (Durban, South Africa).

PB is rapidly expanding across the world, because its core tenets appeal to many audiences. Progressive activists and politicians like PB for many of the reasons cited above—they hope that PB will be a vehicle to broaden the confines of representative democracy, mobilize followers, and achieve greater social justice.

PB is also attractive to major international agencies, like the World Bank, European Union, and USAID, because of its emphasis on citizen empowerment through participation, improved governance, and better accountability.

PB is no longer a localized phenomenon that takes place as part of a government-civil society alliance. Increasingly, donors and international organizations support PB efforts, as do non-profit advocacy organizations that exist around the world. In Sub-Saharan Africa, international NGOs and multilateral development banks have helped to implement PB in Congo (DRC), Kenya, Mozambique, South Africa, and Tanzania. In North America, the non-profit Participatory Budgeting Project (PBP) provides technical assistance and tools to cities undertaking PB projects in both large (New York City and Chicago) and smaller (Greensboro, NC and Vallejo, CA) contexts.  In Europe, Paris and Madrid are currently leading the way, currently investing 100 million Euros in each city in their annual PB processes, both Open Government Partnership Subnational Pioneer cities. City governments in Paris and Madrid are both currently providing technical support to governments across the world.  Madrid developed an online open source civic engagement portal, Decide Madrid,  that is now being be adapted to meet the needs of Buenos Aires and Paris as well as an additional 50 cities.  OGP’s subnational pioneers such as Jalisco (Mexico), Buenos Aires (Argentina), Tbilisi (Georgia), Scotland (UK), Paris (France) and Madrid (Spain)  are coordinating technical support and learning around participatory budgeting among governments and civil society selected to be part of OGP’s subnational pilot program.

Given this diffusion, what do we know about how PB is generating social and political change, as well as changing individuals and communities? The figure included at the bottom of this blog post illustrates the causal chain through which PB can generate social and political changes. Of course, these relationships are ideal types, and may not exist in every context where PB operates.

One common outcome that emerges from PB processes is attitudinal and behavioral change at the individual level, including among citizen participants, elected officials, and civil servants. Research has also demonstrated larger scale impact in some environments, such as:

Of course, there is great variation in the degree to which broader social changes accompany individual-level changes. At least five intervening variables consistently help to explain the wide variation in outcomes surrounding PB (see Figure 1 below). Each of these factors needs to be assessed prior to and during PB processes in order to understand the range of potential benefits of the program. For example, we expect a greater likelihood of positive change through PB when government support is high, when there are greater resources, and when civil society is mobilized and engaged. Conversely, we expect the potential for change to decrease as these factors weaken. This suggests that we need to tailor our expectations of the degree of change to the specific sociopolitical environment in which PB is adopted. It is possible that some PB programs will produce very limited results, just as it is possible that more robust programs can generate virtuous circles of political and social change. 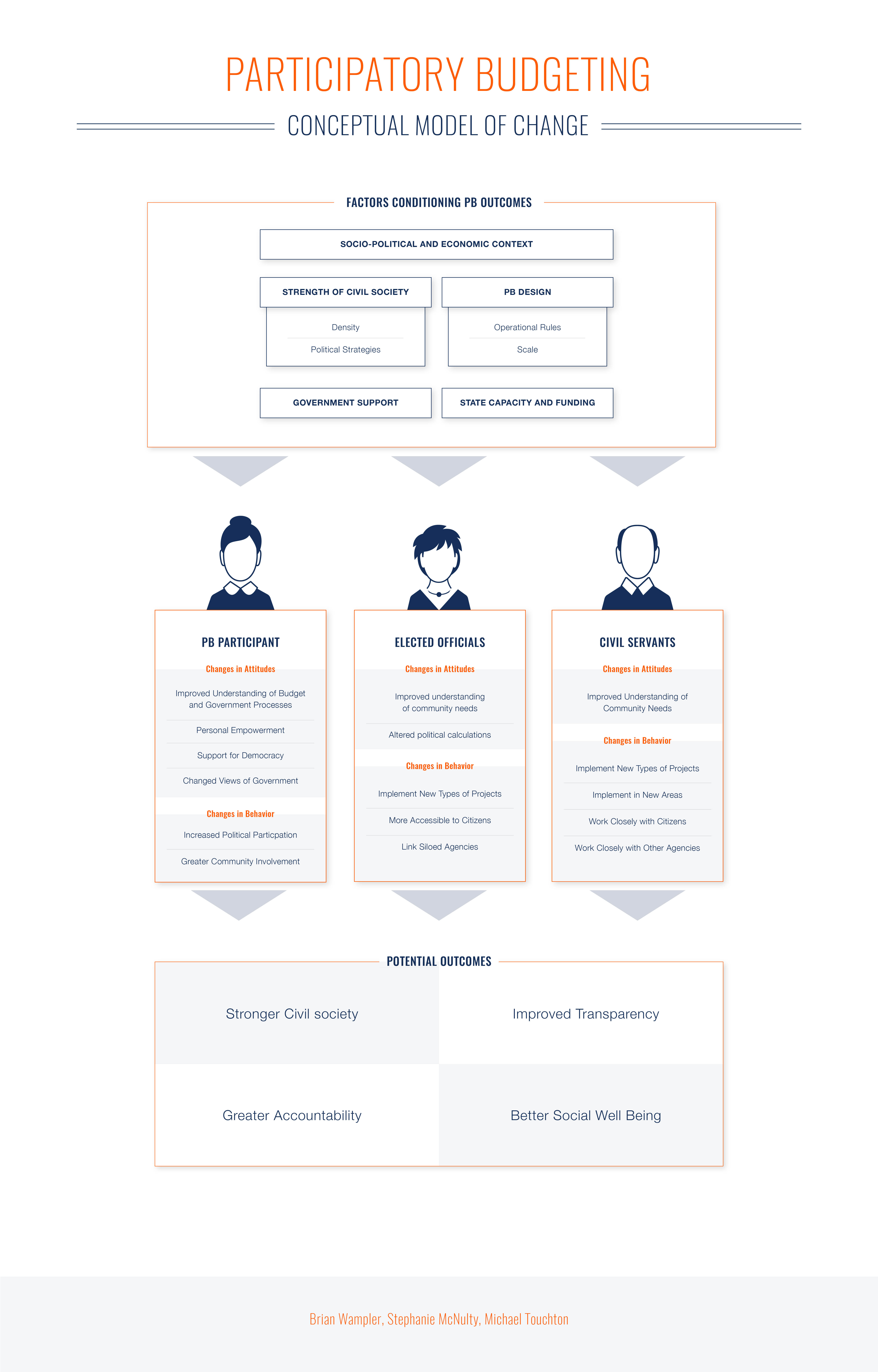 Two additional blog posts follow this initial post. In the second post, we focus on how PB has transformed over the past 20 years; the rules and structures of many PB programs are now quite different from the founding Porto Alegre experience. In the third and final post, we focus on impact to highlight what we know about PB’s impact as well as the unknowns.

*Support for this work was provided by the William and Flora Hewlett Foundation with additional input from Omidyar Network.