Ratcheting up the Fight against Corruption through OGP

It is a great honor and pleasure to participate in the International Anticorruption Conference (IACC) in Panama.  At this IACC, we face an ever more pressing imperative for action and impact.  From the US to Brexit to Moldova to Bulgaria to many other parts of the world, citizens have expressed deep anger and distrust of their government which they perceive to be captured by elites, who live in a cocoon or are themselves complicit in corrupt schemes that benefit the few at the expense of the citizenry.  The recently released Global Corruption Barometer shows that majority of citizens are highly dissatisfied with the way governments are tackling corruption.

We therefore have an enormous imperative and opportunity today to credibly address these concerns.  And our main message to the coalition gathered here is that OGP can be a key partner to serve as a key countervailing force and platform to restore trust in government and combat corruption, especially given recent momentum on anticorruption in OGP.  This will not be easy, but we can achieve real impact if we join forces for concerted, collective action. 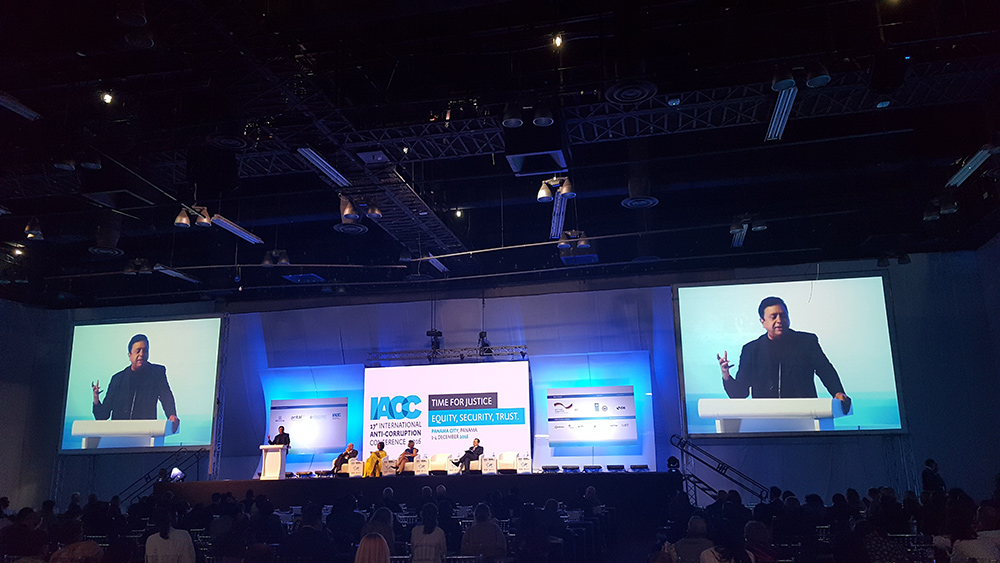 So let us begin with why OGP is a useful partner and platform for the fight against corruption.

First, since OGP’s launch at UNGA in 2011 by 8 Heads of States and 9 Civil Society Leaders, 70 countries have joined the partnership in just five years, along with thousands of civil society organizations, including of course TI as a key partner and steering committee member.  And more countries are expected to join at our Paris Global Summit next week, making it a major global multi-stakeholder platform to leverage.

Second, a unique attribute of OGP is government-civil society partnership which gives civil society, in principle, an equal seat at the table to co-create commitments and monitor progress. At the London Anticorruption Summit when President Buhari announced that Nigeria would join OGP, that very day the Nigerian civil society coalition sent an agenda-setting draft national action plan with transformative anticorruption commitments on open contracting and beneficial ownership transparency which remains central in the final action plan that will be launched in Paris next week.

And the third key attribute is that OGP is focused on concrete actions with accountability. Over the past five years, governments and civil society have co-created 2400 commitments on open government.  And there is accountability not just from civil society but also from OGP’s Independent Reporting Mechanism which publishes an independent report to assess whether governments have lived up to their commitments.

These OGP commitments are addressing corruption in two ways.

Over the last year, we are seeing a ratcheting up of transformative anticorruption commitments.

In Ukraine, reformers from civil society, government and private sector launched the ProZorro platform using open contracting data standards and took it to nationwide.  This has already decreased the cost of procurement by 14% (an estimated $230 million savings) and significantly increased the number of bidders.  Also in Ukraine, a key OGP commitment on e-declaration system has led to the widely publicized, unprecedented disclosure of wealth by public officials, including the Prime Minister, the cabinet, prosecutors and judges. When the portal went live, it sent shock waves throughout the country, revealing glaring discrepancies between some top officials’ income and assets now for the newly created independent National Anti-Corruption Bureau to investigate.

And we are also seeing new frontiers in OGP to tackle the roots of political corruption – for instance, lobbying reform in Chile & Ireland, and political party transparency in Georgia and Mongolia.  In Chile, the OGP commitment led to the creation of a public register where authorities must disclose meetings with and donations from lobbyists, with sanctions for non-compliance, and monitoring by an independent Council for Transparency. In Georgia, the Supreme Audit Institution started publishing data on political donations in a user-friendly format. Using this, TI Georgia launched a portal allowing users to track donations made to Georgian political parties, including whether donors are benefitting from public contracts.

And an exciting new frontier heading into the OGP Global Summit next week is that groups of OGP countries and CSOs are joining hands to undertake collective actions through a Paris Declaration to advance open government norms.  So we have the C5 group of countries, Mexico, Ukraine, Colombia, UK, France, committing to open contracting data standards.  Post-Panama Papers, we have countries like UK, France, Slovakia, Kenya, South Africa, Norway committing to beneficial ownership transparency.

These are promising developments, but still a shadow of what is needed for impact and scale.  We need to join forces to push for greater ambition and credible implementation.

First, it is vital that civil society leverage the OGP platform to push for transformative anticorruption commitments.  While I have shared some inspirational country examples, there are at that same time a significant number of countries that have no transformative commitments on anticorruption.  For instance, we need to get more countries to join the Paris Declaration commitments on open contracting or beneficial ownership transparency.  And let us push for new OGP commitments on investigation and prosecution of impunity, co-created between investigative journalists and law enforcement officials in countries.

And third, we need to forge stronger multi-stakeholder coalitions to overcome vested interests.  The landmark Fujimori-Montesinos corruption scandal that Jose Ugaz unearthed in Peru reveals at its core entrenched networks of corruption.  We need coalitions of integrity to fight these entrenched networks of corruption.  In the end, the real promise of OGP is exactly that – a platform where reformers from government can join hands with civil society and private sector to find collective courage and strength to overcome the odds.  The Ukraine Prozorro platform on open contracting came about through collaborative actions by government reformers, civil society and private sector working pro bono.  In Guatemala in 2015, a citizen movement to combat grand corruption joined hands with the State Commission Against Corruption and Impunity and the Prosecutors Office to together bring down the President.

Ordinary citizens feel powerless in the face of towering vultures of grand corruption and impunity.  We need to forge coalitions and movements as countervailing forces to these predatory forces.  This is the real frontier – not governments or civil society acting alone, but joining hands to deliver collective punch.  That is the real promise of OGP that we invite stakeholders at IACC to use, to forge coalitions to deliver real impact against impunity and corruption.