Time is up for Smoke and Mirrors 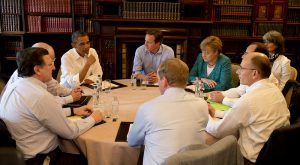 Photo credit: “Round the Table: G8 leaders” by G8 UK Presidency via Flickr.

Illusions were shattered at last week’s G8 summit as transparency took centre stage. Leaders from large industrialised nations recognised the need for governments to be open and accountable.

The world is witnessing the growth of a global movement facilitated by technology and social media and fuelled by information – one that contains enormous potential to create more accountable, efficient, responsive, and effective governments and businesses, and to spur economic growth.

Access to data allows individuals and organisations to develop new insights and innovations that can improve the lives of others and help to improve the flow of information within and between countries. While governments and businesses collect a wide range of data, they do not always share these data in ways that are easily discoverable, useable, or understandable by the public.

Done well, its impact will be material, measurable, and transparent.

“Today G8 and developing countries have agreed to work together to make the most of these huge advances on both land and extractives.

And the UK will continue to drive a transparency revolution in every corner of the world through our leadership of the Open Government Partnership.

But to make this work there is something else we need to do. And that is to recognise and get behind heroic individuals who drive this agenda on the ground.”

Open is the new normal

“The G8’s work to curb corporate tax avoidance is awesome. I think we would like to see even greater moves for corporate transparency, but the foundation the G8 built will take us into a more accountable corporate world then we’ve seen before.

The summit echoed US President Barack Obama’s pledge to open government in 2011 when he declared:

“We pledge to be more transparent at every level — because more information on government activity should be open, timely, and freely available to people. We need to pledge to engage more of our citizens in decision-making — because it makes government more effective and responsive. We pledge to implement the highest standards of integrity — because those in power must serve the people, not themselves. And we pledge to increase access to technology — because in this digital century, access to information is a right that is universal.”

The leaders released a communiqué documenting the agreed actions from the G8 summit, a selection of extracts are below.

Empowering people to hold governments and companies to account- we have agreed a transformative Open Data Charter to make budget data and other government information public in an easily accessible way. We will make progress towards common global reporting standards to make extractive industry payments more transparent. And we will work with resource rich countries to help them better manage their extractive revenues so as to provide a route out of poverty and reliance on aid.

Raising global standards of transparency in the extractive sector and building the capacity of countries to manage their resources effectively will improve accountability, reduce the space for corruption and other illicit activities and ensure that citizens benefit fully from the extraction of natural resources.

The G8 will take action to raise global standards for extractives transparency and make progress towards common global reporting standards, both for countries with significant domestic extractive industries and the home countries of large multinational extractives corporations.

Under such common standards companies would be required to report on extractives payments, governments would take steps to ensure disclosure compliance, and those governments that wish to move towards the Extractives Industries Transparency Initiative (EITI) standard will voluntarily report their revenues.

Open government data are an essential resource of the information age. Moving data into the public sphere can improve the lives of citizens, and increasing access to these data can drive innovation, economic growth and the creation of good jobs. Making government data publicly available by default and reusable free of charge in machine readable, readily-accessible, open formats, and describing these data clearly so that the public can readily understand their contents and meanings, generates new fuel for innovation by private sector innovators, entrepreneurs, and non-governmental organisations.

We pledge to implement the highest standards of integrity.

“We believe information and the participation of all stakeholders: governments, civil society, the private sector are at the core of development effectiveness.

Which is why we remain committed to build the capacity of governments to adopt and implement more transparency, whether on open data, on tax and trade policies, or on land and extractives transactions.

We are launching the “Open Contracting Partnership” to ensure effective disclosure and participation in all public contracting.  We will support the development of a global open contracting standard.

To incentivize governments to increase transparency of their corporate registries, and promote efforts related to corporate accountability, we are supporting the launch today of the pilot of the Open Company Data Index.

I invite you to engage with us through initiatives and platforms. Let’s all put our ideas into practice. Transparency works. If we bring our collective value-added to this agenda we believe transparency can have a transformational effect on development.”

The Open Data Charter is a promising step in the right direction and a  development which the Open Government Partnership welcomes. Following the G8, OGP will work with new and existing participating countries to help transparency become the star of the show, with both governments and their civil society partners taking centre stage.

Let’s all put our ideas into practice. Transparency works.

What are your thoughts on the G8 transparency agenda? We would love to hear your comments…